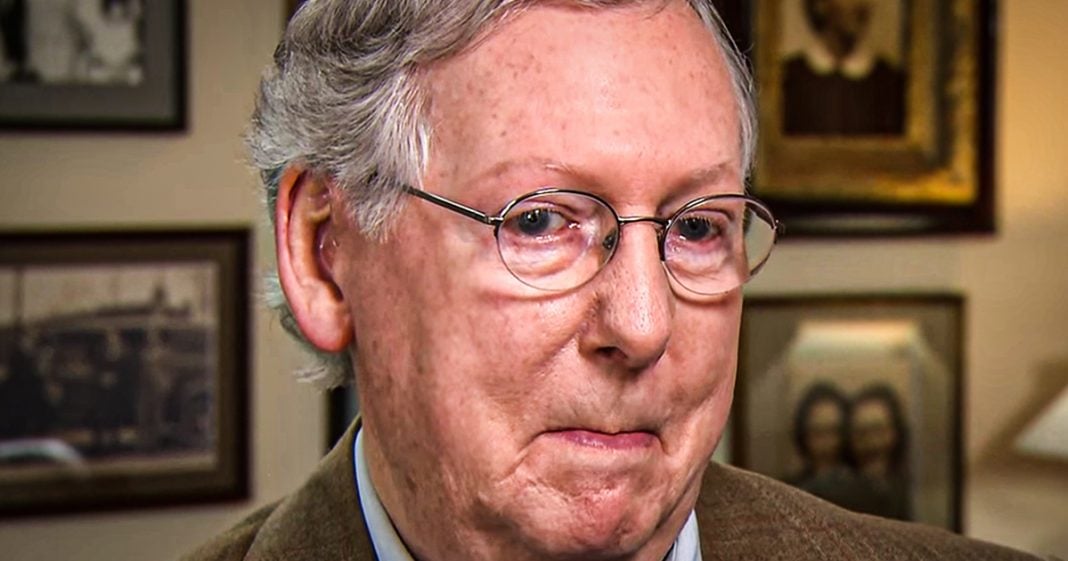 It is easy to get excited about all of the new information that directly implicates Trump and all of his worst cronies in criminal activity, and that excitement is good. The problem is that we can’t think for a second that this has changed any Republican minds in the Senate. These men and women have had plenty of chances to do the right thing, and they always fail us. Impeachment will be no different, and Ring of Fire’s Farron Cousins explains why.

So there’s been lots of excitement this week about the impeachment trial that’s right on the horizon. Democrats send in those articles of impeachment over to the Senate, and of course Lev Parnas going out there in the media telling everybody about all the things he knows, all the pictures he has, the phone calls he made, the text messages he has, and everybody in the Trump administration who was involved in these crimes. So it’s pretty easy to get excited right now and we should, we should be excited because these are huge developments and we pretty much have a rock solid case to prove that the president and Rudy Giuliani, a Devin Nunez and Mike Pompeo and William Barr were all engaged in a criminal conspiracy.

And unfortunately that’s the end of that story folks. We have to stop pretending and I still see stories about this every day and it annoys me because it’s never going to happen. Let’s stop pretending that Republicans in the Senate are going to end up doing the right thing with this impeachment trial. Let’s stop. Let’s just stop. They are not in a million years going to vote to convict and remove Donald Trump from office even though a majority of people in this country want that. I’m sure those poll numbers have climbed higher in the last few days with all of this new evidence specifically from Parnas. But these Republicans in the Senate have made their bed and Trump is right there in the center of it and they’re going to climb in there with him. They will not do anything that is going to harm this man. Earlier this week, Susan Collins from Maine, right? One of the, one of the more moderate Republicans, one of the ones who outlets like the Hill have been telling us for weeks.

So maybe, maybe she won’t go with McConnell on impeachment. Maybe she’ll go with the Democrats. Maybe she’ll do the de no, she’s not gonna do any of it. Cause she told us flat out earlier this week, if left Parnas is so important. Why didn’t the Democrats call him to testify in their impeachment? Huh? Why didn’t they do that? If, if, if he was reliable, he’d be honest with you. I agree with Susan Collins. I know people on Twitter were furious that she said this, and it’s well because it was under court order. Now man, she’s right about that. I know you couldn’t get them to testify at the time, so that’s why you hold off on impeachment. Maybe call some other people while you were waiting for the courts to work this out. Collins isn’t wrong about that,

but it also shows that she is absolutely not under any circumstances going to buck the Republican party. Now you have Mitt Romney out there who says, yeah, I’d like to hear from John Bolton and I may vote to call him as a witness. I don’t know. Mitt Romney tells us, but at the end of the day, Mitt Romney is a coward. His niece is running the GOP. She is the chairwoman of the national Republican party. He a sitting Senator is not going to buck his party and his family and thereby embarrass the entire GOP folks. That ain’t gonna happen. I hate to say that. I hate to be the pessimist here. I hate to be Debbie downer, but it’s not going to happen.

Okay, so why bother? Well, you have to bother because this is important information. The president clearly committed crimes, so did Rudy, Giuliani and all of the other folks. That part is his name. We know that the evidence suggests it, but the problem is all of this evidence may not make it over to the Senate. Trial left Parnas may not make it to the Senate trial. They may not vote to call him as a witness. I’d be shocked if any Republican said, yeah, bring him in. I don’t think it’ll happen. So all of this new evidence that he is just now given the house because it was protected under a court order, it’s not going to go to the Senate unless the Senate okays it and the Republicans control the Senate. Republicans control whether or not to say yay or nay on that new evidence. The Democrats have no control over it because they finish their impeachment without it.

This isn’t just another knock at the Democrats. Trust me. I understand why they move forward with impeachment knowing that the Senate is not going to convict because the public needed to know about this. So that excitement that we have right now, even though I’ve just told you to, you know, tamper it down a bit. We should be excited. We should be energized and we should be talking about all of this. But the reason is not because we can convince Republicans to convict him. It’s to make sure the public doesn’t forget about it before November. Cause if you don’t think that’s a very real danger, you are kidding yourself folks. If the Senate trial concludes, even by the end of February, I promise you by November, majority of voters will have already forgotten most of the horrible stuff they will. They do. I’ve been doing this for over 15 years, folks. There’s only one constant in American politics and that is the public always moves on.