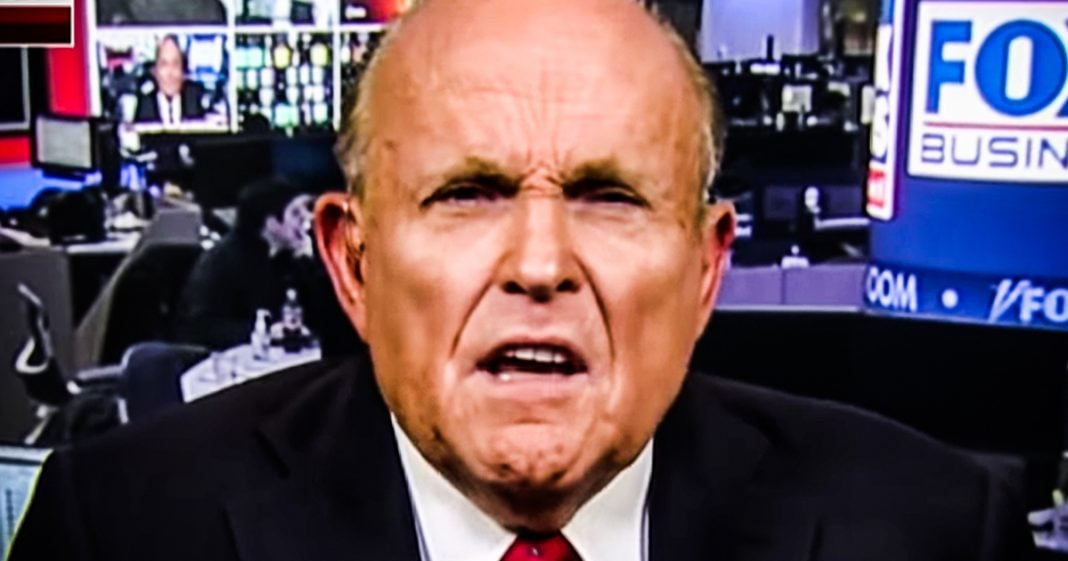 During a recent interview with Fox News, Rudy Giuliani attempted to distance himself from the crimes of Lev Parnas by saying that Parnas had “misled him.” While he wasn’t exactly clear about what he was misled about, it is obvious that Giuliani is getting scared. And the more he tries to throw his friend under the bus, the more likely it will be the Lev stops protecting him. Ring of Fire’s Farron Cousins discusses this.

Rudy Giuliani is finally out there once again doing some interviews saying some stupid things for the entire public to hear. And one of the reasons the cable networks want to get Rudy Giuliani back on screen is because of all the Lev Parnas documents and evidence that came out within the last week. And Rudy Giuliani appearing recently on the, uh, Ingram angle on Fox news absolutely did not disappoint because rather than trying to fumble his way through all the allegations that Parnas has leveled against Giuliani, he tried to throw Parnas under the bus. The guy that has all the records, all the documents, all the evidence, every thing from all of his interactions and is releasing them slowly and steadily like this and knowing little drip that just won’t go away. You’re trying to throw that guy under the bus who hasn’t even released everything he has yet. Not a smart move.

Giuliani, I’m going to be honest with you. That’s really not smart. But here’s what Giuliani said about his good pal Lev Parnas on the Ingram mangle. He said, love is someone I’m, I was close to. Obviously I was misled by him. I feel very bad. I was godfather to his child and spent a lot of time, I still feel sorry for him. Now I’m gonna keep reading in just a second. But Holy crap, you are the godfather of his kid and now you’re trying to act like this guy who you were clearly super best friends with, like he’s somehow misled you. You had no idea that his company fraud guarantee was somehow not on the level. No. You knew this guy personally. You knew him closely. You knew his kids. You knew Rudy. Not only that, but we already have all of the evidence that shows that not only were you not misled by Lev, but you were the guy in charge of all of this, not live Levin, wasn’t pulling the strings here you were.

Giuliani continues. I’m not going to respond to him for each and every one of the misrepresentations he’s made because there are so many. If I’m called as a witness, I’m prepared to do it and he gets really Trumpian right here I will not be sucked into a point by point response, which I am ready to give in great detail in front of Congress or a court like I am totally not going to do this thing that I am absolutely ready and prepared to do because I’m totally not gonna do it, but I really can. I swear to God, I’ll do it. I’ll do it. You call me as a witness. I am so ready to do this. Rudy Giuliani says, Rudy, buddy, listen, you have a, in your career, I guess you’ve taken on organized crime, right? So you should know how they operate. So you should also know that when you’re on the other side of that, when you were the guy involved in the organized crime, you got to do what love parties did.

He is a frickin pro. He knew what to do. He knew to keep the text messages. He knew how to keep emails. He knew to keep the photographs and the videos and the audio recordings. He knew because eventually members of organized crime families get caught right, and they, you know, need to work out some plea deals. They need to make sure they don’t stay in prison too long. Some of them keep their mouth shut. Others try to throw everybody under the bus because they kept all those records. Guess which one love partisan is because as we have seen Rudy, he’s not keeping his mouth shut, but if you want to go out there in the media and try to throw this guy under the bus, I can promise Lev hasn’t given us the juiciest stuff yet. He’s saving that for when he really needs it.