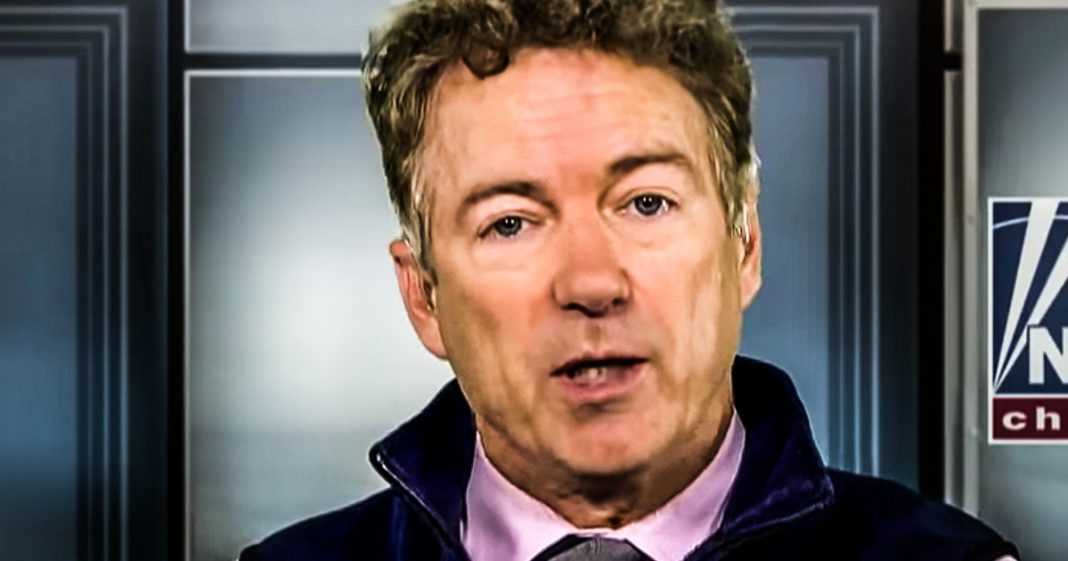 Republican Senator Rand Paul does NOT like the idea of calling witnesses during the upcoming impeachment trial, and he wants his fellow Republicans to know that he will call Hunter and possibly even Joe Biden to testify if they vote to call in other witnesses. Paul seems to think that Hunter has something to hide, when in reality no one cares if Hunter shows up or if he doesn’t. Ring of Fire’s Farron Cousins discusses this.

Well, the impeachment trial in the Senate is scheduled to begin tomorrow and nobody is more pumped about this hearing, or the trial I should say, than Republican Senator Rand Paul. Rand Paul is ready to go scorched earth against not just the Democrats, but any Republican who has the audacity to vote to either allow witnesses or allow new evidence. Rand Paul has made it clear he will make your life a living hell if you are Republican and you vote with the Democrats. Here’s a couple of quotes from Rand Paul from interviews late last week where he threatens his fellow Republicans to fall in line. If you vote against Hunter Biden, you’re voting to lose your election basically. Seriously, that’s what it is. If you don’t want to vote and you think you’re going to have to vote against Hunter Biden, you should just vote against witnesses, period. Now, the reason Rand Paul said that, and the reason he’s mentioning Hunter Biden is because he had previously said, if any Republicans vote to allow witnesses, then I’m going to force your butt to vote on whether or not to call Hunter Biden.

How do you like that folks? You vote to bring in Pompeo or Parnas or Bolton, and I’m going to make you vote on whether or not to bring in Hunter Biden. That’s Rand Paul’s tough talk for you, but he continues. My first preference would be to be done with it as soon as possible and not to have any witnesses, Rand Paul says, because that’s totally how you conduct a fair trial. He goes on, if they insist on having people like Bolton coming forward, my insistence will be not just one witness, but that the president should be able to call any witnesses that he deems necessary to his defense. If some Republicans help Democrats get witnesses and there are no witnesses for the president, I think the end result is a revolutionary tide against those people. I can’t imagine that Trump will let it go, but, will let it go by, if someone votes to bring in witnesses that his administration isn’t interested in.

So you go against Trump, Rand Paul going to make you pay. The guy that got his butt kicked by his neighbor not that long ago, is now the muscle for Donald Trump. Yes. Everybody fears little bitty Rand Paul. He will come after you with all the fury that you can expect from a member of the Paul family folks. So do not cross Rand Paul. Do not vote to bring in witnesses. Make this thing go away as fast as possible, Rand Paul wants his fellow Republicans to know, because if you don’t, he will rain down upon you with all the fire and fury that Donald Trump allows him to. That, that’s not how this works, bud. We’re going to vote on witnesses and yeah, I seriously doubt you’re going to have to inflict your fury upon any Republicans because I’m willing to bet they’re all gonna fall in line.

Even poor little Mitt Romney who says that, I would like to hear from John Bolton. You’d like to, but you’re going to be a coward about it anyway. And as for the whole Hunter Biden thing, who, who cares? Call him as a witness. Democrats actually don’t care. Like the average democratic voter out there says, who cares? You want to call him, call him. Go for it. We don’t want Joe Biden to be our nominee anyway, so, hey, if you can take him down and Trump down at the same time, that’s a win win for everybody, isn’t it? So call him. You’re not actually threatening anybody, at least not in the way you think you are by saying, ooh, if you vote to have Bolton or Parnas come in, I’m totally going to call Hunter Biden. Oh no. What are we going to do? Please Rand Paul. Don’t do that to us. Wink, wink. No, seriously Rand Paul, do whatever the heck you want. Nobody in this country is afraid of you. All we want is to see a fair trial.