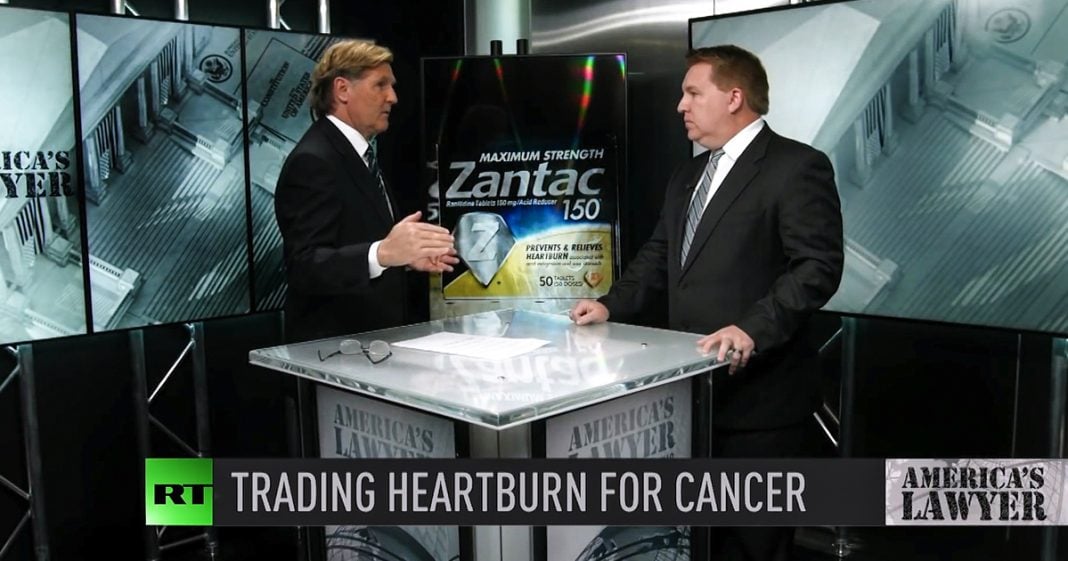 Via America’s Lawyer: Mike Papantonio is joined by attorney Daniel Nigh to update us on litigation against manufacturers of the popular heartburn relief aid Zantac. The drug has been found to create sky-high doses of the carcinogen NDMA in the human body leading to stomach, bladder, and kidney cancers. Just WHY has it taken the FDA decades to alert the public about the dangers of this chemical, which is specifically used by researchers to foster cancer in lab animals? It appears celebrity attorney Michael Avenatti will be unable to escape the litany of charges against him, including for wire fraud, embezzlement, and extortion against Nike. Mike Papantonio explains more.

Mike Papantonio:             Researchers at Valisure discovered that Zantac, the popular heartburn medication, is loaded with a cancer causing substance known as NDMA. They first notified the FDA about this in June of last year, but just in keeping with the FDA, they did nothing about it. The FDA slept on this issue and now it’s killing Americans. Joining me to talk about this is Daniel Nigh. Daniel, let’s start at the top. What’s the Zantac problem?

Mike Papantonio:             Okay, put it in perspective. We’re not talking about small amounts, as you point out, this is a chemical that when a scientist wants to make an animal, induce cancer in an animal, this is their go to chemical.

Mike Papantonio:             Now, there’s a number that the, and of course, I trust nothing that the FDA says. This is the most dysfunctional, it’s almost a useless entity. But they say, well it’s 96 nanograms is going to be okay, but tell me how many nanograms we, we’re talking about with this.

Daniel Nigh:                          Well, there’s multiple different options out there, theories that we’re still trying to gather a little bit more information about. You know, the petition from Valisure show that it may break down into as many as 4 million nanograms.

Daniel Nigh:                          Right. There’s another, but that’s with heating the sample, there might be some issues recognizably with that. But the other issue is when it goes inside of the body and it’s, and it’s combined with nitrates, a high nitrate diet, like if you’re eating pizza at the same time as taking your NDMA, they’ve shown also that under a simulated testing that it may be hundreds of thousands of NDMA breaking down there. The FDA has even only tested the pill itself and found nano, you know, high nanograms of NDMA in the pill itself.

Mike Papantonio:             Okay, let’s back up on all that. Okay. First of all, we know we can begin here, that we know GlaxoSmithKline, if I’m betting the farm on it, they phonied up results from clinicals. I see it almost every case that I handle.

Daniel Nigh:                          That’s their moneymaker. That’s how it became GlaxoSmithKline. They forced the merger because they weren’t in superior position without Zantac, we don’t, I don’t know if they’d even be in the name.

Mike Papantonio:             The argument is that, that we’re hearing from the other side is, well, oh that’s only when it’s heated up. The point is, we know this, when the Zantac goes into the human body and it can, it combines with nitrates, as you’re saying.

Mike Papantonio:             Nitrate is something you can get from smoked sausage. You can get it from any, look, food is packed with nitrates. Bacon has more than you can count. When you combine bacon with the Zantac pill, those numbers can hit three thousand, four thousand, five thousand, that’s what this is showing right now.

Mike Papantonio:             Sloan Kettering, probably one of the most important cancer research hospitals in the world.

Daniel Nigh:                          Well, we know, what we know now is that Sloan Kettering, the lead investigator, they made the, was interviewed by Bloomberg and they had mentioned that as after they saw the study results they polled, using Zantac in their hospital.

Mike Papantonio:             Okay. So the hospital itself pulled the product out of their hospital and they’re the ones that did the study.

Mike Papantonio:             Well, surely it’s going to be in one of the, one of the medical literatures. Surely that study is going to be published so the public can know about that. Tell me, when will it.

Mike Papantonio:             Okay. So just to be clear, Sloan Kettering comes out with a report where they completely substantiate everything that you’re alleging. The study shows it, it’s very clear. But nevertheless, even though that study, most of the time would be published in like the JAMA or one of the medical pieces of literature, it’s not showing up yet.

Mike Papantonio:             And we, and if I’m guessing, because I’ve seen this before, I’ve seen the FDA get involved and hush a story. I’ve seen the, the lobby, the pharmaceutical lobby work together with the FDA to make a story go away. Is that what’s happening here in your estimation?

Daniel Nigh:                          Well, we’ve seen on numerous of these science blogs online that it’s already leaked, that JAMA pulled the study preemptively. We don’t know why. You know, I hope, Pap, I hope that it’s just to look at it and see if it’s more accurate and just, you know, make, give it a little bit more vetting and make sure that the findings are robust. But we’ve seen this time and time again, we’ve seen this in past projects.

Mike Papantonio:             But here, we’re talking about a product that causes cancer. There’s no question. I mean, anybody that says no, there’s no evidence, where do you find a scientist that comes out and says, yeah, this does? That the pill itself generates the chemical NDMA. You understand what I’m saying?

Mike Papantonio:             And so here we are right now, and my supposition here, I’ll bet on this all day long and when we do the discovery on this and take the depositions, what we will show, I promise you, will be that lobbyists for the pharmaceutical industry and the FDA worked together to suppress the Sloan Kettering study. I promise you that’ll happen. Not only the Sloan Kettering study, but other studies. Tell me what scientific, what’s the best support for Zantac and it’s cause to cancer? What do you rely on?

Daniel Nigh:                          Well, we know that Zantac breaks down inside of the, into NDMA. Even the FDA has already known that there are some levels that it’s, that it’s breaking down. So that alone, there’s a mountain of literature in terms of animal studies, in terms of human dietary studies, in terms of occupational exposure studies that show that NDMA causes cancer. But we also even have a few studies that were done back in the day, not understanding that NDMA was breaking down inside of the body, but done back in 2008 showing an increased risk of breast cancer for people who were taking Zantac. And also we’ve seen an increase in the risk of bladder cancer.

Mike Papantonio:             Bladder, colon, stomach, what do people need to be really aware of? If they’ve been popping, look, there’s people that pop Zantac all day long because they have acid reflux, they’ve got ulcers, they’ve got doctor says, yeah, take as many as you want and they pop them like, like candy. What should they be conscious of?

Daniel Nigh:                          Well, I think, I think some of the main cancers we’re going to see is we’re going to see bladder cancer, kidney cancer, colorectal cancer, stomach cancer. But I would say this, when we’ve looked back and we found that it even causes an increase in the rate of bladder cancer in terms of Zantac users. We know from our work in Valsartan where it caused NDMA to break down inside of the body. That breast cancer, you just wouldn’t see that in the animal studies, dietary studies, occupational studies as much. So if it, if it causes that and an increased risk, then I think all cancers are on the table at this point that NDMA from Zantac may cause any type of cancer.

Mike Papantonio:             Now, I can hear it in trial, GlaxoSmithKline says, gee, we voluntarily pulled it off the market. Truth is when should they have known and put this relationship together and not put any more people at risk? As you look at the facts of this case, when should that have been done?

Mike Papantonio:             So, in about 30 seconds, what are their defenses right now? What are they saying? What are the, I mean obviously they know this is a multibillion-dollar problem for them. I mean, because just the call, just the calls that you’re getting from people, they’re staggering numbers, aren’t they?

Mike Papantonio:             Yeah, and people think it’s like taking aspirin. There’s no problem here, because that’s what their doctors think because the doctors haven’t even been educated really about the NDMA relationship.