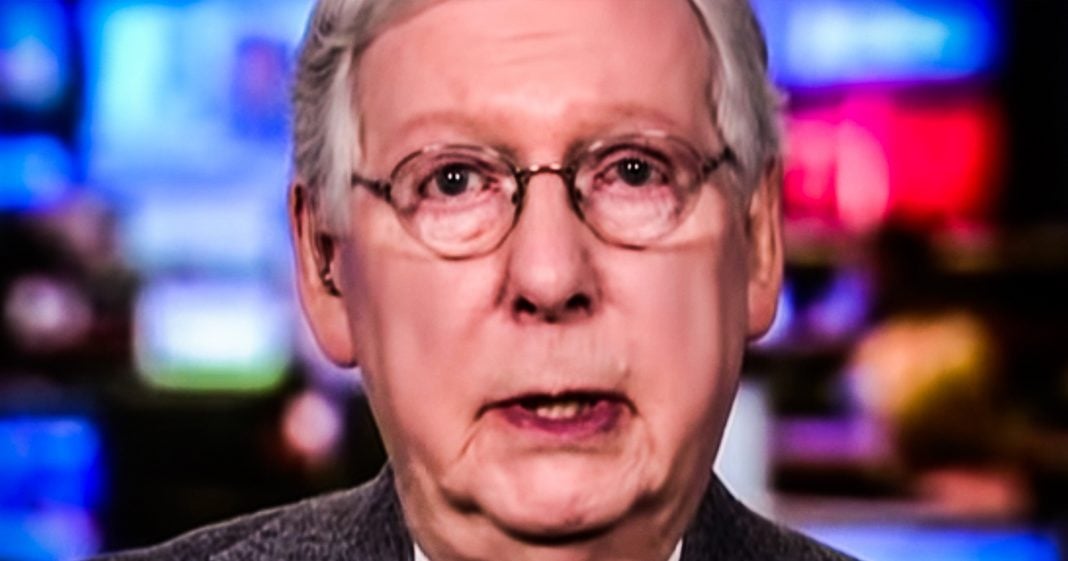 Republican Senate Majority Leader Mitch McConnell has laid out the rules for the impeachment trial, and Democrats are rightfully angry. If everything goes according to McConnell’s script, the whole trial will be done in the middle of the night when the public isn’t paying attention and will only last about 5 days. Democrats are prepared to drag it out longer, but they can only do that if they get the votes to call witnesses. Ring of Fire’s Farron Cousins discusses McConnell’s rules.

Well folks, it’s finally here. It’s impeachment day and yesterday, Senate majority leader Mitch McConnell laid out his rules on how this impeachment hearing is going to go and Democrats in the Senate and house and all over the country were rightfully angry about these rules that Mitch McConnell has put in place. So without further ado, here is how Mitch McConnell sham of an impeachment trial is going to play itself out. First and foremost, both sides get 24 hours to make their case 24 hours. That is it. And those 24 hours are going to be spread over two days. So Democrats, you get two days and 24 hours to make your case. Republicans and Trump’s defense, you get two days, 24 hours total to make your case. Then after that they get 16 hours to question opposing sides. 16 hours, that’s it. 16 hours to oppose your opposite side. And then there will be four hours of debate if they need four hours on whether or not to allow to call witnesses.

And if after that four hours they hold the vote and they do decide to call witnesses, then they get to call some witnesses here after, of course, they vote on them and approve each and every one of them. Probably not going to happen. So right now we’re probably looking at what, maybe six days, six days of an impeachment trial. Oh, but that’s really not the screwed up part, right? I mean, every time you go to court, there’s always some kind of schedule. You get this much time for this, this, this, and that. Okay. This is a little short and a little crammed in there because of what a McConnell’s done here by saying you have 24 hours, but you only get two days to use it. That means if they get started around noon or one o’clock in the afternoon, which is likely going to happen, that means that to use your full hours, 12 hours for that day, you’re going to have to keep talking until 1:00 AM when the public is already asleep and nobody’s paying attention.

So do your worst. Everybody’s not going to see it or excuse me, nobody’s going to see it cause they’re going to be asleep. And that’s exactly what Mitch McConnell wanted. But here’s the thing, again, like I said, that’s not even the most screwed up part. The most screwed up part is that McConnell put in a rule that says, Oh by the way, all that evidence you had from the house of representatives, the impeachment, the stuff you base your impeachment vote on, that doesn’t automatically come over here to the Senate. It can come over here and we can look at it, but technically it’s not going to be admitted as evidence in our trial unless we all vote on it and a majority approves it. So all those wonderful Lev Parnas documents that we’ve been talking about that should have come out earlier and they didn’t. Um, those, those are going to go there.

But there’s technically not evidence and Democrats find enough Republicans to say, okay, that can be evidence. That is the sham part. That is the screwed up part. That is the part that Mitch McConnell put in there to make sure that this trial is a sham as Republicans have been saying. It is, right. I mean Republicans have told us from the beginning, the whole impeachment is a sham. It’s a farce, but they’re the ones who made it that way. It’s a self fulfilling prophecy, much like when Republicans tell us that the government is corrupt and doesn’t work. Yeah, that’s right because you’re the idiots who are running it and making it not work and that is exactly what they’ve done with this impeachment trial. This is going to end as we expect Trump will be acquitted. We may or may not get witnesses little too early to tell on that, but even if we do, it’s not going to change the Republican’s minds starting now on impeachment day, this whole thing is effectively a waste of time. If the end goal is to get Donald Trump out of office, if the goal is to embarrass him, if the goal is to convince the public that Trump committed a crime, maybe it’ll work, but again, without the evidence, if that is not a part of this trial, then we don’t even get the benefit of convincing the public that Trump committed a crime. They’re going to watch this, they’re going to see no evidence. They’re going to see Trump’s lawyers out there making these fancy new cases,

and then it’s going to end, and the public will then believe will. Maybe there was an evidence. I didn’t hear anything. I didn’t see any of this stuff, and then we lose them too. This trial was over long before it even began. Today.