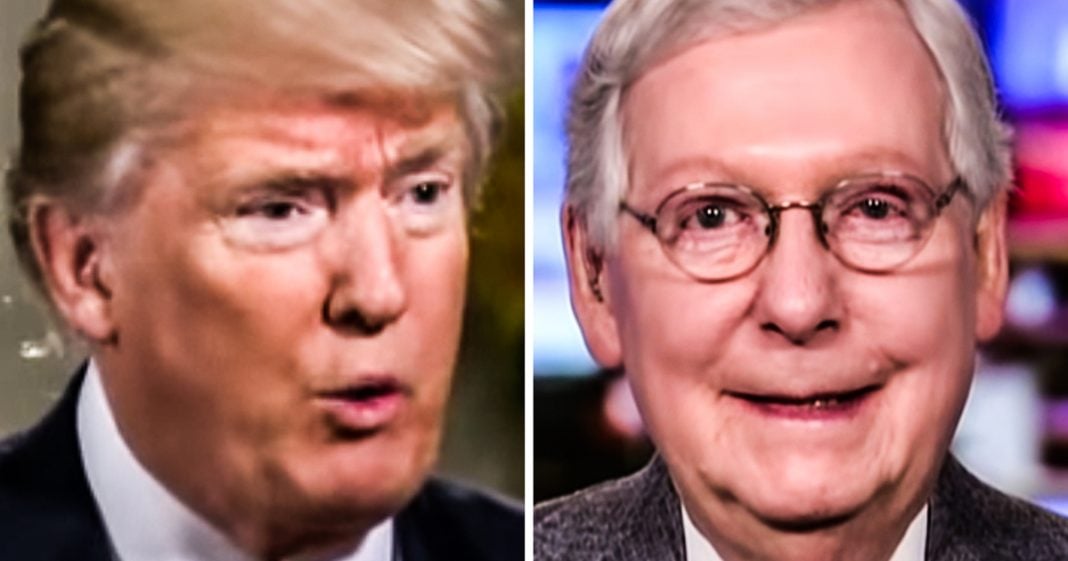 Swing voters aren’t happy with Mitch McConnell’s comments about the impeachment trial, and one focus group said that they are far less likely to support Donald Trump if the Senate trial proves to be a sham. Granted, this was only one focus group of swing voters in a swing state, but the likelihood that their beliefs are widespread is strong. Ring of Fire’s Farron Cousins explains how McConnell’s protection of Trump could prove to be his undoing.

Recently a focus group conducted in Pennsylvania featuring 11 voters who voted for Obama in 2012 and then switched to Donald Trump in 2016, so these are swing voters. Went from Obama to Trump, they’re in Pennsylvania, so they’re already in a swing state, about as swinging as you can get, I guess, among these voters in this focus group. But they all collectively said that Mitch McConnell’s behavior with impeachment is absolutely unacceptable. And if he continues this, if he does make the Senate impeachment trial a complete sham, which all you know indicators say he’s going to, then they would actually be less likely to support Donald Trump for reelection. To put it another way, these swing voters have said that Mitch McConnell’s behavior is so egregious that it may end up costing Donald Trump reelection this year. Now again, this was 11 people. This wasn’t a poll of thousands of people. There’s no margin of error here that we can add or subtract, it’s just 11 random folks, who all happen to be swing voters.

So the question is, do we put stock into this focus group? And the answer is yes, we do. A little bit. I mean after all, that’s what focus groups are. You grab a group of people who are representative of the group you’re trying to market to and you ask them questions. You get their opinions on things. That’s how products work here in the United States. That’s how movies work. Small focus groups determine a lot of big things for this country. So yes, this is important even if it is just 11 people because these beliefs that they have about Mitch McConnell, these views that they have of him and this sham trial he’s about to launch, these are more widespread than just a couple of folks sitting in a room talking to a pollster. This is what a lot of people are starting to think. So it begs the question as I have said from the beginning, the Democrats really screwed the pooch on impeachment in the house, so maybe I’m wrong. Maybe they didn’t. Maybe they are going to achieve their goal of embarrassing Trump driving down his poll numbers and exposing Mitch McConnell. Maybe that is the three dimensional chess that Nancy Pelosi’s been playing from the start. If it is, congratulations because you played me too. I didn’t see it coming. But I don’t think it is.

What this focus group tells me is that man, we should have done this a lot closer to the election. I hate to have to keep saying this, but trust me, as somebody who’s been doing this for 15 and a half years now, I can tell you the public forgets about things. Usually in a manner of weeks. We have 10 months to go till the election from the start of this impeachment trial, a little over 10 months, the public will have forgotten. These swing voters at that point won’t even remember that Mitch McConnell rigged the whole thing. They won’t and if you remind them about it, they’re going to look back on it and think, well maybe it wasn’t all that bad. Just like George W. Bush, just like every past president, no matter if they were good or bad, they always get that bump in approval rating after they leave office. Right? Two to three months after a president leaves office, they do another public poll and say, do you approve or disapprove? Approval always goes up. Even if the guy was horrible, like George W. Bush, because people always remember things as not quite as bad as they actually were.

So these, this focus group here, these ideas that they’re sharing these views on, Mitch McConnell are phenomenal, but they’re not going to hold for the next 10 and a half months. Now, if this had taken place in October, yeah, that would’ve been a game changer. September, game changer. August, probably a game changer. But this early in the year, a lot of crazy stupid things are going to happen between the impeachment trial and the election. And by the time people walk into that polling booth to either pull that rig lever or complete that little line of the arrow, all they’re going to remember is the most recent stupid thing that probably Trump tweeted that morning. And they will have forgotten all about how pissed off they were at Mitch McConnell.