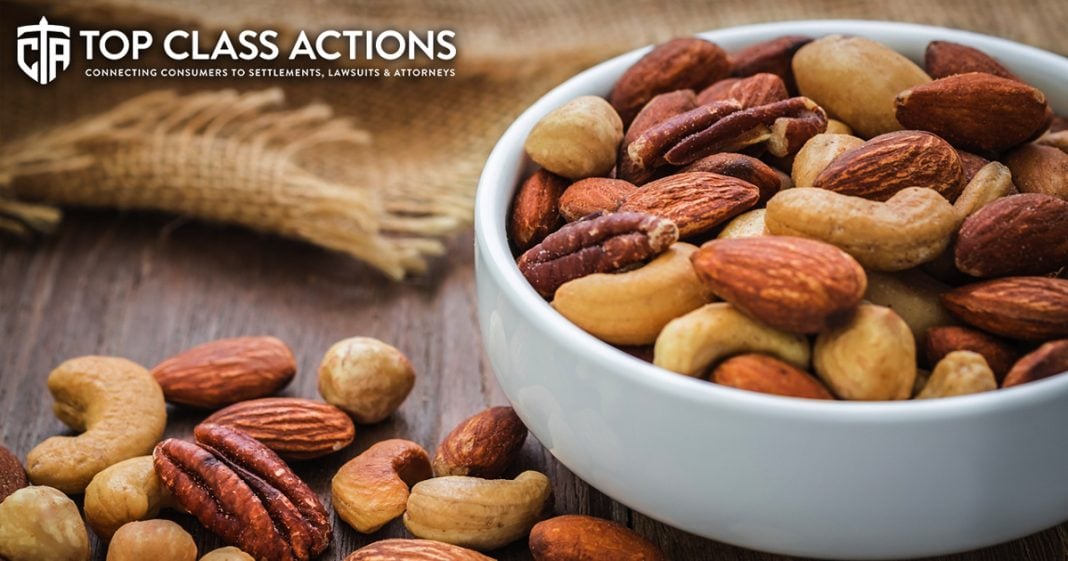 A class action lawsuit has been filed against Star Snacks Company by a consumer who claims that the Imperial Nuts Cashew Snack Mix made by the defendant is made up of mostly peanut pieces. Gregory Lowery says he purchased three packages of the Imperial Nuts Cashew Snack Mix expecting the package to contain mostly cashews based on the product’s name. But when he opened the bag, he allegedly found out that it contained a plethora of peanuts instead. Ring of Fire’s Farron Cousins discusses this with Scott Hardy, the President of Top Class Actions.

Farron Cousins:                  As I have said repeatedly, American consumers are not complicated. We’re not asking for too much either. All we want is that if you advertise something and we go and buy it, we want the thing that you’re selling us to actually be the thing that we’re getting. But unfortunately, we are seeing far too often in this country what is being advertised to us and what is the actual product, sometimes they’re two completely different things and that’s actually what we’re seeing right now with Imperial Nuts. Joining me to talk about this is Scott Hardy with Top Class Actions, and Scott, if you buy, you know, a bag of mixed nuts, you know, cashew mixed nuts, whatever it is, you expect it to actually contain mixed nuts, which is a mix, a variety. But this new class action says, yeah, that’s not happening with this product, is it?

Scott Hardy:                          No, the Imperial Nuts Cashew Snack Mix class action alleges that this customer went in there, bought the snack mix. They say, hey, I like cashews. Let’s have some cashews. Here’s my cashew snack mix, crack open that little bag, start taking out those yummy, nutty goodness and lo and behold, it’s mostly peanuts, very few cashews and not just peanuts, you know, nice whole little peanuts. No, they’re all just peanut bits that have been all broken and cracked. So this class, class action actually mentions two things. One, they’re saying, hey, if you’re selling me a cashew snack mix, give me my dog on cashews. This is what I want. You know, I understand if you’re putting a couple of peanuts in there, that’s fine. But I expect the majority of what I get will be cashews. Second, if you’re going to show on this bag, these pretty pictures of these nice looking cashews and even some peanuts, because I know I’m going to get some peanuts in this yummy snack mix.

Make sure they’re not just peanut bits. They’re not just crumpled and crunched and, you know, I’m not even getting any whole peanuts in here either. So it’s twofold. But the main thing is all of us have gotten a snack and gone and gotten some, you know, a bag of nuts at the gas station as you’re going on a road trip, hoping that you’re going to get those yummy cashews or pistachios or whatever you’re getting and then get short changed. Well, these lawyers are trying to fight for you to make sure you don’t get short changed for those cashews or other, what I would term premium nuts, that you buy.

Farron Cousins:                  Well, and, you know I, I think it’s funny too because people need to understand this isn’t just anger, a guy’s mad because he didn’t have enough cashews in the bag. On the back of the bag, on the ingredients label, which has to list the ingredients in descending order from most to least, cashews is number one. But you open up the package and that’s not true. So, so, so there is a pretty big labeling problem here with this and that’s what this, essentially what this lawsuit is predicated upon. You’re telling us on this package that there are more cashews in this bag than anything else and you can open the bag for yourself and see that this is totally a false claim here.

Scott Hardy:                          Yeah, it’s, you know, you open it up. If you’re buying a cashew snack mix, you’re expecting a whole lot of cashews. You’re not expecting mostly peanuts. And so that’s what they’re trying to fix here is if you’re going to label a product as cashews or pistachios or whatever the case is, make sure the majority of what you’re putting in there are, you know, is that actual star ingredient. Is that premium nut that yumminess that people are buying, that people are paying extra for. If somebody wanted a bag of peanuts, they’ll buy a bag of peanuts, but if they are looking for a cashew or something like that, then just, just help us out. Put more of that in there than anything else. That’s all we’re asking.

Farron Cousins:                  Right, and that, that’s part of the thing too is, you know the reason they, they name it cashew is because that, that catches your eye. If you’re a big cashew fan, that’s what you’re going after. Instead of just calling it, you know, they, it’s called cashew snack mix. They could call it nut snack mix then okay, you, you know, you’re getting nuts. You don’t know what kind, you don’t know how many of each, but okay, you’re just buying nuts. So whatever you get, you’re happy with. You advertised it as cashew, you got only a couple in there and then a bunch of broken peanut pieces, this isn’t even close to what you’re claiming it is. So can you just do the right thing for once, either change your label to say pieces of nuts in a bag or throw some extra cashews in there and give us what we’re paying for.

Farron Cousins:                  No, it wouldn’t. For more information about this issue. You can follow the link in the description of this video, head on over to Top Class Actions, and of course while you’re there, if you have not already done so, please subscribe to their weekly newsletter. Scott Hardy with Top Class Actions, thank you very much for talking with us.