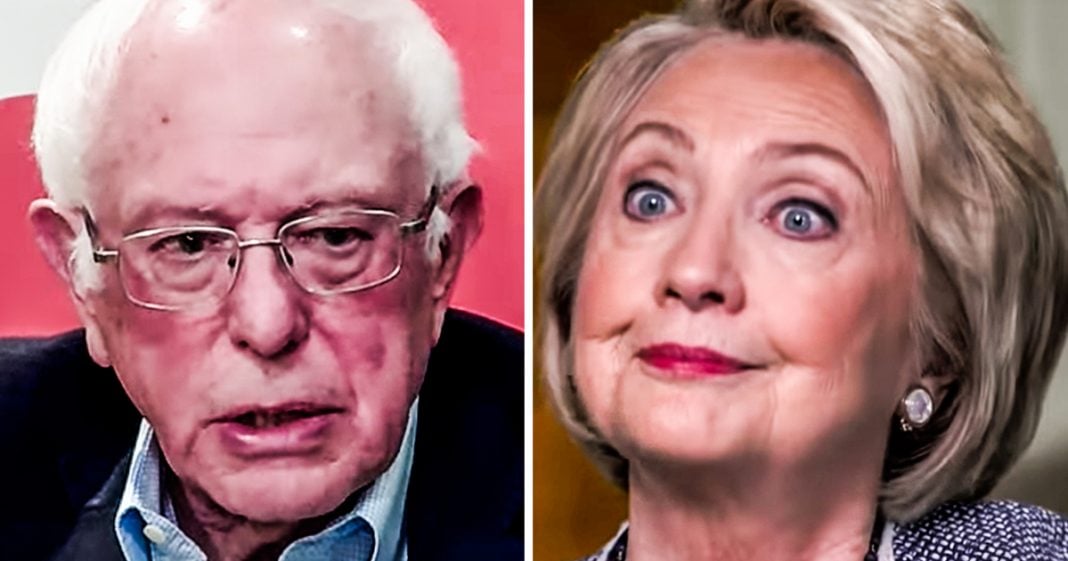 Hillary Clinton did an interview with The Hollywood Reporter to promote an upcoming documentary series about her that will premier on Hulu, and she didn’t hold back her anger for Bernie Sanders. In the interview, Clinton attacked Sanders personally, claiming that nobody likes him, and even went as far as to perpetuate the attacks on Sanders’ base. Ring of Fire’s Farron Cousins hits back at Clinton for her disgusting attacks.

I knew four part documentary series called Hillary is heading to Sundance before heading to Hulu and because of the new documentary about her, Hillary Clinton got to sit down with a reporter from Hollywood reporter and talk about all things about the documentary, about her personal life, and of course about the 2020 presidential election and Hillary Clinton, and let’s be honest, the interviewer as well, didn’t waste any time in their interview trashing Senator Bernie Sanders to kick things off the interview or brought up something that Hillary Clinton said in the documentary and here is what Hillary said about Bernie. He was in Congress for years. He had one Senator support him. Nobody likes him, nobody wants to work with him. He got nothing done. He was a career politician. It’s all just bologna and I feel so bad that people got sucked into it. The interviewer then asked Hillary, does that assessment still hold that assessment of Bernie Sanders that how you still feel Hillary Clinton responded? Yes, it does. The interviewer then went on to say, if he gets the nomination, will you endorse and campaign for him?

Okay, I’m not going to go there yet. We’re still in a very vigorous primary season. I will say, however, that it’s not only him, it’s the culture around him. It’s his leadership team. It’s as prominent supporters, it’s his online Bernie bros and their relentless attacks on lots of his competitors, particularly the women, and I really hope people are paying attention to that because it should be worrisome that he is permitted this culture not only permitted, he seems to really be very much supporting it, and I don’t think we want to go down that road again, where you campaign by insult and attack and maybe you try to get some distance from it, but you either don’t know what your campaign and supporters are doing or you’re just giving them a wink and you want them to go after Kamala Harris or Elizabeth Warren. I think that that, I think that that’s a pattern that people should take into account when they make their decisions. All right. Everything you just said was bullshit. All of it. Every bit of it. You’re perpetuating the same myths that your campaign created in 2016 to trash Bernie Sanders and his supporters and his staff and his team and everybody else who’s ever associated with him and his entire life. That’s what you’re doing right here, Hillary,

and you’re an absolute whiny, petulant child. Exactly like Donald Trump for sitting here and bringing this crap up. When the interviewer didn’t even ask about that, all the interviewer asked is, Hey, if he gets the nomination, you’re going to support him. You’re going to campaign for him. Well, let me tell you about the online Bernie bros that that wasn’t even part of the question was it? No, you were holding that frigging grudge for four effing years and you thought this would be the smart time to let it all out. You see Bernie Sanders rising in the polls and it pisses you off because he may be able to accomplish what you never could and that is to beat Donald Trump, not just with the popular vote, but with the electoral college vote as well because that could be a very real possibility. Here you are part of the establishment.

I mean, right. Hillary Clinton, not just a part of the establishment. She pretty much is the establishment. She represents the establishment and here she is parroting out these same debunked, useless lies that the establishment has been telling us about Bernie Sanders, about Progressive’s for four and a half straight years because that’s all she’s got. That’s all she has left, right. I’m going to attack the Bernie bros. I’m going to go after his staff. I’m going to go after makeup, all these claims about him because I got nothing better to do. Bernie Sanders went out there and campaign what, roughly three dozen times. Then somewhere between two and three dozen times for Hillary Clinton in the final weeks of that campaign, he was the one who went to the States that she refused to go to. He was out there doing his damnedest to make sure she got elected. And this is how he repays her and let that be a lesson. Folks. Don’t try to work with the establishment cause as soon as it’s convenient for them, they’re going to stab you in the back and somehow try to blame you for getting stabbed.