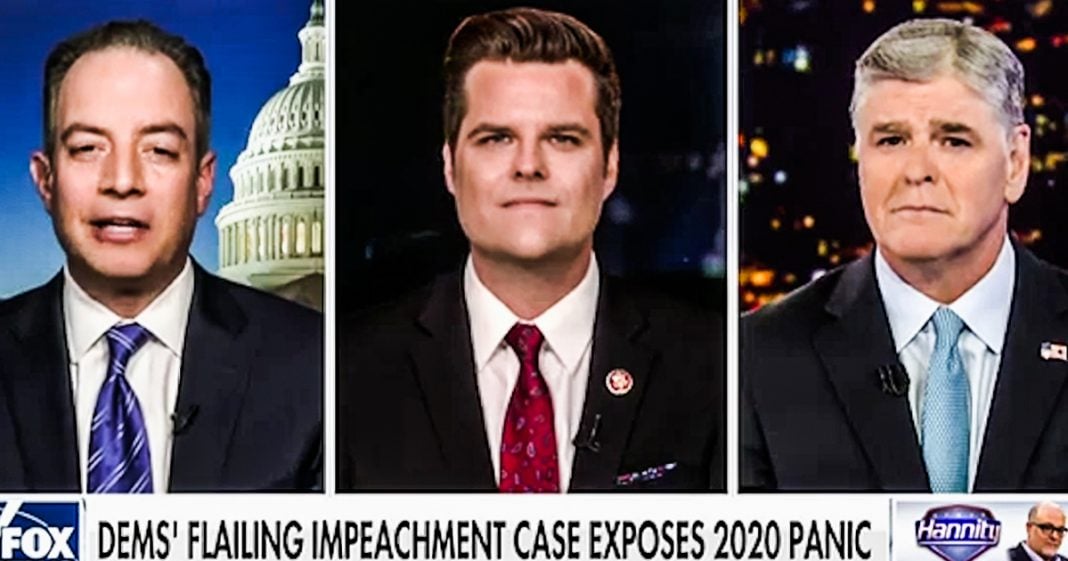 Donald Trump’s former Chief of Staff Reince Priebus appeared on Sean Hannity’s Fox News program this week to defend the President, but his defense was about as weak as they come. Priebus said that the best defense right now is to invoke the “so what?” method of saying that the crimes the President committed aren’t even impeachable. Ring of Fire’s Farron Cousins explains what’s happening.

There’s little doubt left in the minds of anyone in this country unless you’re on the far right that Donald Trump did in fact commit crimes. I mean the government accountability office, Donald Trump’s own federal government this week came out and said, yes, the president committed a crime. All of the information from Lev Parnas earlier this week, and even before that tells us that, yeah, Donald Trump committed a crime. But don’t tell that to the people on the far right. Don’t tell that to people like former Trump administration, chief of staff, Reince Priebus, because they simply don’t care. See, that’s the point we’re at right now in this whole, did Donald Trump commit crimes or not? Everybody is saying, yeah, he did. But Republicans have a new defense launched by Reince Priebus on Sean Hannity’s program on Thursday night. And rather than give it away, I’ll let mr Priebus explain it himself. This is their new defense.

So what, so what if he committed these crimes? So what if everybody’s telling the truth? So what if he was trying to ask a foreign country to interfere in our election cycle yet again? So what, those aren’t impeachable offenses. So sayeth Reince Priebus, the constitutional scholar, right? Oh no, I’m sorry. He’s not a constitutional scholar. And the constitution is very clear. And also at the same time very vague about what constitutes impeachable offenses. High crimes. Like the president literally cannot walk out onto fifth Avenue and shoot somebody and misdemeanors. So you know, jaywalking is a misdemeanor by the way. So if he crosses the street when he doesn’t have a signal, yeah, technically we can impeach him for that folks. It doesn’t matter what it is because the constitution also says other things about it, but it doesn’t go in to what those other things are.

You can launch an impeachment inquiry based on anything. And if you got the votes, who can impeach him and get him out. That’s kind of how it works. And that’s kind of how the founders wanted it to work. But all of that is just a lesson for mr Priebus who isn’t even watching this right now. The real fact is that Republicans are at the point where they can’t even defend it anymore. All of this evidence, the GAO report, every single thing is like, Oh yeah, he committed crimes. So now Republicans are just kind of throwing up their hands and say, so what? Who cares? I mean everybody commit crimes, right? I mean, no, that’s not a viable defense, mr Priebus, and not shocking anymore. While you’re no longer Donald Trump’s chief of staff, I would love to see you walk out and do an actual press conference with adversarial reporters, not just Sean Hannity who says they’re at the end.

They’re like, Oh yeah, great point. That’s a good point. That’s a good point. Yeah. Good job. Yeah. So what I would love to see, you have to explain to any investigative journalists how this, so what defense of yours is actually going to play out? And at this point I kind of want the Senate to go ahead and just call you as a witness anyway. Right? I know you’re not even involved in this. This happened long after your butt got kicked out of the white house. But I would love to, she, you have to take the stand and they ask you these tough questions and then you’d sit there and say, yet, Phil, what? You know what you can do? So what? It’s not impeachable year. You’re crazy. And one of the funniest parts about that clip too, I did not see the entire thing. I didn’t get to see Matt Gaetz speak, but just seeing his big dumb face right in the middle. Just look at me, mr president. We’re friends again. I’m here to, I’m going to defend you too. So what? I’m like Reince Priebus. Yeah. Listen, y’all got no leg to stand on anymore. We all know he committed crimes. We’ve all seen the evidence. We’ve read that GAO report. So best of luck to you and your, so what defense.