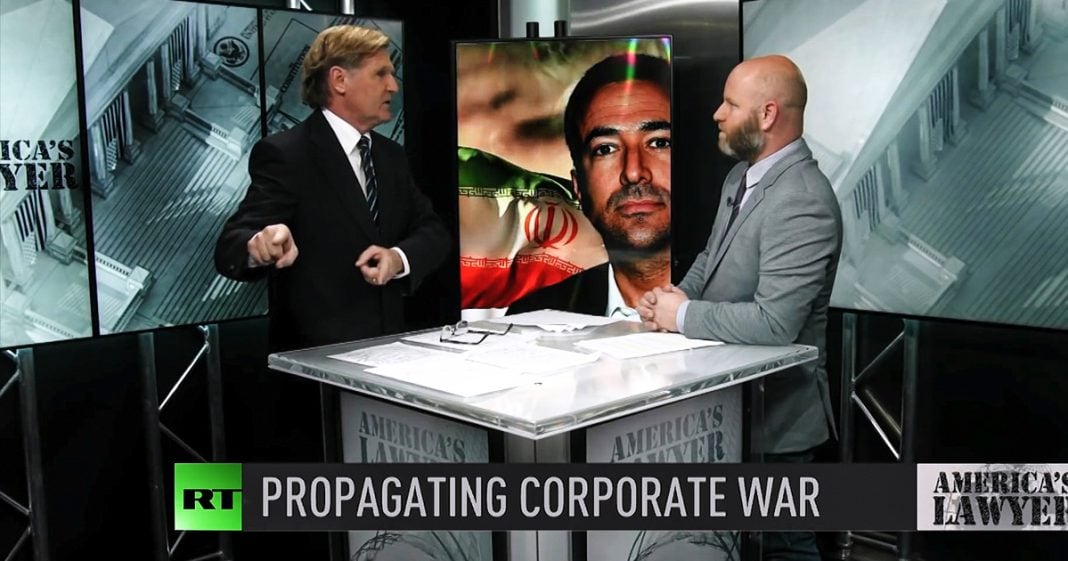 Via America’s Lawyer: A wide-angle snapshot of the media frenzy engulfing escalations between the U.S. and Iran. Hawks are back to business as usual beating war drums across mainstream media. Are these turbulent times just the latest iteration of the war machine driven by news outlets and defense contractors joined at the hip? Mike Papantonio and Farron Cousins discuss.

Mike Papantonio:             War with Iran might be averted for now, but it’s not for a lack of trying by, by corporate media. My God, it just is like Iraq all over again, isn’t it? I mean, who are these people? I remember Wolf Blitzer, when the big lie about Iraq was told, it wasn’t just Wolf Blitzer, it was Joe Scarborough, it was virtually everybody on MSNBC, everybody on CNN trying to drum up a war. So here we got Melber who used to be a fairly credible journalist. I mean, we actually did some work with him early on. He is bought just like, just like Rachel Maddow has bought into this war machine and it’s like, here are these liberals, these so-called liberals trying to churn up a war because CNN is going to die without a war. MSNBC, their numbers keep dropping without a war. But you get a war there, things get better. Right? Advertisers come in with the big weapons manufacturers, they come in with their money. People tune in because they’re scared as hell that they’re going to get bombed. That’s the only that’s going to save CNN.

Farron Cousins:                  Right, you know, it would be interesting, I know still waiting on the numbers at this point, but I would love to see what CNN’s ratings were during that time between the death of Soleimani and then the alleged, you know, kind of ceasefire, everything dies off because I guarantee you CNN went through the roof during that particular time. And as you pointed out, Wolf Blitzer in the lead up to Iraq had the big map on the floor. He was walking around showing bases here, this is a potential line of attack. They did the exact same thing, I believe it was last Monday.

Mike Papantonio:             Okay, how about this? This is what’s really driving me crazy. MSNBC is parading every weapons whore they can through the studio. If they’re a war pig, they’re at MSNBC or they’re at CNN. Ari Melber has four of them coming through, every one of the people that he has coming through his show, are directly working for the weapons industry. Not one time does he mention or ask the question, gee, what’s your contact with the weapons industry? That guy wants a war. So they’ll watch more Ari Melber. So they’ll watch more, you know, I guess Rachel Maddow. So Joe Scarborough’s show will have something to talk about besides Trump. And so now all of a sudden this whole thing is getting out of control because of the media. I mean, they want a war and there’s no question why they want the war. It’s a money issue. And if you don’t think Phil Griffin or what’s our, our luck, with, with Lack, with MSNBC, if you don’t think they want a war, because they make more money with war, you’re kidding yourself. CNN, they won’t live without a war.

Farron Cousins:                  Oh absolutely. All of these, you know, corporate media networks are watching the ratings go down. Fox obviously the exception, but the rest of them, they don’t have anything to stand on. They don’t really have a brand. They don’t really have an identity. All they know is that war is good for ratings. War is good for advertising. So if we can sell this just like we did in 2001 and 2002 we can be back on top, even if it’s only for a year. Even if it means thousands of us troops die, we can be back on top and that means more money for everybody.

Mike Papantonio:             Okay, Farron, how do you bring, how does Ari Melber bring in guests like, like McAfee, we all know what the guy is. He’s a, he’s nothing but a war pimp. He is a war pig. Karl Rove, Ari Fleischer, all of these people who got us involved in Iraq, Ari Melber knows exactly who they are. Rachel Maddow knows who they, how do you put them on the show and say, oh by the way, let me at least disclose to the viewers that McAfee, Melber, that these folks have a direct interest in war. How do you not at least do that? They didn’t do that with Ari Fleischer, who was my God, look at what he did with Iraq. He, he was willing to go on as a press secretary for Bush, willing to go on the air every single day and lie like hell to get us involved in a war. And now you’ve got the Ari Melber, and virtually everybody on CNN saying, yeah, we need a good war.

Farron Cousins:                  Well, and it’s ridiculous too, because even if you assume for a second, suppose none of these people even had ties to the weapons industry, if they didn’t have that, they still have no credibility because these are the same folks and Michael Chair, toss in there as well. Ari Melber had him on. These are the same people that lied us into Iraq.

Farron Cousins:                  So, so not only are they tied financially to the weapons industry that stands to make a lot of money off this, they also have zero credibility. They have proven themselves repeatedly to lie the United States into war, and we still welcome them with open arms.

Mike Papantonio:             And corporate media says, oh my God, people are cutting the cable. Why are they going to social media? Ari Melber, you know, this is the problem. That’s why the credibility issue with modern corporate media is in the can. Farron Cousins, thank you for joining me. We’re going to be doing a lot more of this story, I can tell you.