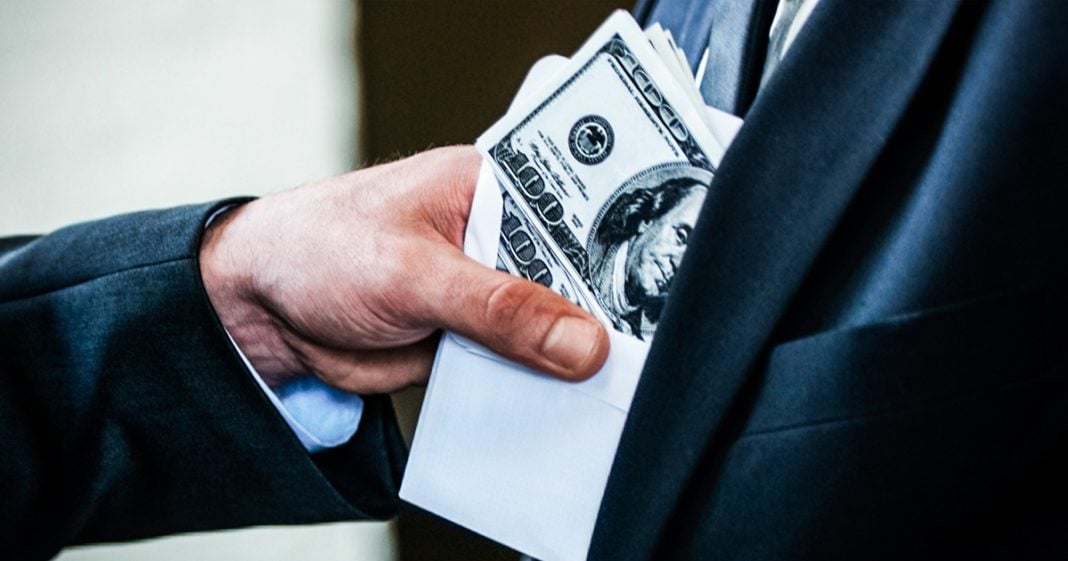 If there was any doubt in your mind that the Republican Tax Scam wasn’t just a big handout to the wealthy, consider the new data that tells us that the biggest banks in this country pocketed a collective $32 billion as a result of these tax cuts. The average working class person saw little to no change in their taxes, but the wealthy are doing better than ever. Ring of Fire’s Farron Cousins once again exposes the Republicans’ tax cut lies.

In the event that there is anyone out there that thinks that the Republican tax scam package passed at the end of 2017 was anything less than a giveaway for the top 1% let me offer you a little bit of new data to further prove that nobody but the top 1% benefited from this tax bill and this new piece of data is $18 billion. $18 billion is what the top banks, top six banks, in the United States collectively saved last year because of this tax bill, $18 billion saved by JP Morgan, Bank of America, Citigroup, Wells Fargo, Goldman Sachs, and Morgan Stanley. The six of them combined saved $18 billion, got to put that money back in their pockets and it’s 100% because of the, the Republican tax bill. Add that with what they saved the year before and that number jumps up from $18 billion to $32 billion that is all directly attributed to the Republican tax cut package. $32 billion for just six banks because we provided them with new tax loopholes, a lower tax rate, and more ways to get around not having to pay anything at all. That’s what this tax cut package was all about. These already hugely profitable banks that even before this, were seeing their highest revenues ever, over $30 billion back in their pockets.

Oh, and one of the reasons they’re also saving so much money and seeing their profits soar right now, not just because of the tax cuts, but also because they decided after they got all this money, they’re going to cut back on lending. So if you need a new mortgage or if you want to go buy a car, you’re going to have a harder time today than you would have before they got all this money. So they’re making more money, which Republicans told us was totally going to somehow trickle down. You free up capital with the banks, they are more likely to lend to you. They told us that. Banks are literally doing the opposite. They have more money. They’re lending less. Oh, and by the way, they also cut thousands of jobs last year too. So, you know, there’s that. So I guess those people don’t get raises or bonuses either like we were promised we would. They instead got nothing. They got worse than nothing because they lost their job for no apparent reason. And that’s what’s happening with this Republican tax cut.

This needs to be a major Democratic party talking point. I find it sickening that at least in this last presidential debate, and we haven’t really seen it much, that they’re not talking about the specific effects of the Republican tax cut package. Not just what do you think of your wealth tax? Isn’t that a little greedy or stingy and how are you going to pay for these programs? No, how about you address these statistics, moderators and networks? How about you talk about the disgusting fact that we have corporations out there pulling in billions of dollars in revenue each year who are literally paying $0 in tax and then ask what are we going to do to make them pay up a little bit more? Those are the questions that should be asked, and these are the types of studies that every Democrat should be talking about on the campaign trail. The reason the network moderators don’t bring this up is because most of them are benefiting from it. Most of them are millionaires, Wolf Blitzer, he is set. The MSNBC host who did that debate, they’re set. They got multimillion-dollar contracts. They get these tax cuts, average person watching at home, we didn’t. We got nothing. We got absolutely nothing. And that is what the Democrats need to be talking about. These tax cut packages have put even more of our money into the hands of the wealthy elite while the working class, the 99%, we once again got screwed out of everything.