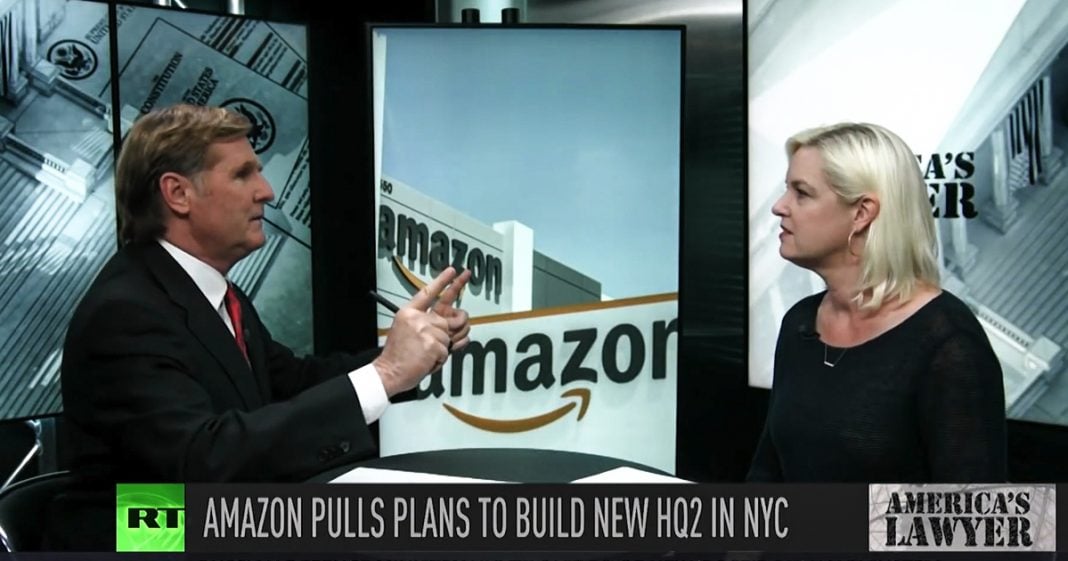 Via America’s Lawyer: After several very successful teacher strikes across the country, the state of Arizona is trying to make it virtually impossible for public school teachers to go on a strike. Mike Papantonio and Trial Magazine Executive Editor Farron Cousins explain more. Then, Legal Journalist Mollye Barrows joins Mike Papantonio to talk about reasons behind Amazon’s decision to cancel its plans to build a second headquarters in New York.

Mike Papantonio:             After several very successful teacher strikes across the country, the state of Arizona is trying to make it virtually impossible for public school teachers to go on a strike. Wow. You know this, this look, this involves, you look at Oklahoma. You look at Arizona. It’s almost like the politicians that are they, they want to take away the teacher’s right to speak. I mean literally to speak. They want to get to the position to where it is, it’s almost criminal conduct to go on strike, but teachers are fighting back. Tell us how.

Farron Cousins:                  Well right now, and we have seen this for several months now, this Red for Ed campaign. Teachers are walking out. They’re striking because they need smaller class sizes. They’re overloading them with kids and they cannot spend enough time with each one to give them a proper education. They do not have the supplies that they need to be able to teach our kids.

They’re getting, you know, horrid wages. And, and listen, I can tell you this from personal experience. My wife is a special education teacher. She spends at least $100 out of her own pocket each and every month to buy supplies for her classroom, reams of paper markers, whatever it is she has to do that. And now under new tax law, we don’t even get to write that off anymore.

Mike Papantonio:             Farron, how have they become the villain? You know, right now where you’re going, where this is going is it’s, it’s okay to fire teachers for virtually anything if they appear in these, this is what these legislators want. If they appear at a civics event and they make a speech about how we’re underpaid and how we’re not being treated right and now we should walk out, teacher can be gone.

Mike Papantonio:             But it’s, it’s a lot more involved in that. How have they become the vic, I mean, have they become the bad guy here? That’s what these, it’s almost as if these legislators have never taken a civics class themselves to understand the constitutional risk in what they’re doing here.

Farron Cousins:                  Well it’s, it’s an extension of the attack on unions because that’s what they’re mad about. They’re mad that teachers can still unionize, that they can still collectively bargain in the, and that they’ve been successful with that. And when you look at the success of these teacher strikes, the massive one in California a couple weeks ago, they got all of the results that they were looking for and that’s how organized labor in the United States used to be fighting against corporations. But these teacher unions really are the last big union power here in this country.

Farron Cousins:                  And they are, and it’s because of laws like this, Arizona, Oklahoma saying, if you talk about politics, you are fired. If you do not show up for work, you don’t have a job to come back to the next day. You’re gone.

Mike Papantonio:             If you show up and give a speech that we don’t like, that sounds like it’s talking about a walkout, you’re fired. I don’t see an end to this because the level of sophistication of some of these legislators is so bad. They haven’t taken civics classes. They don’t understand constitutional law. Thank you for joining me. This is a story that I think this year is a story that’s really going to heat up. You’re going to see teachers that say, you know what, I don’t care. I’m out of here. Thanks for joining me.

Mike Papantonio:             Amazon has pulled out of its plan to build its corporate headquarters in Queens, New York. The move comes after pressure from community leaders and politicians who protested that the cost of doing business with Amazon comes at a very high price for the neighborhood. Mollye, didn’t we see this coming? I mean, first of all, you saw, you saw Amazon set up this fight. It was a fight all over the country and it was the big publicity scam. You know, you need us, here’s what we’re going to do for you. But then when they started doing the numbers on it and they started saying, wait, wait, wait, wait a second, we’re giving you these subsidies. We’re giving you this money. We’re giving you these tax breaks. We’re giving, giving, giving, and it would be 50 years before we ever got our money back. What, so what, what reasons though did the protesters give for this push back?

Mollye Barrows:                Well, I think it boiled down to when they started getting into the nitty gritty. This deal was done, like you said, they were pitting cities against each other all over the country. Where are we going to go for our new headquarters? Then this sort of neighborhood that was in the process of gentrification anyway in Queens on Long Island wins the award. They’re promised $3 billion in all these tax incentives and other incentives and then people start asking questions. Well, wait a minute, this deal’s already done. How was it done in such a secret of manner? How exactly will we benefit? Oh, by the way, our property values are already starting to go up. We’re going to price ourselves out of being able to live here. The neighbors who thought they were going to benefit from these 25,000 jobs that you’re promising with this move, so the more they started to push back and ask questions and say exactly how are we going to benefit from this? We see how you are, Amazon.

Mike Papantonio:             Here’s what happens. First of all, you have to assume that the politicians pushing this are are doing it for another reason. I mean, Cuomo’s, Cuomo’s a great example. You know he, he is tired of being governor. He wants to move on to something else now, Senate, President, who knows? So this was his, this was his going to be a swan song. I’m going to deliver this for you. And it sounded great. There was great hoopla, great, they’re coming to Queens. And then people started putting a pencil to it and saying what they told you, Mr. Cuomo is absolutely inaccurate. What you bought into is inaccurate. And yes, you may say that this is going to be your next platform for running for Senate, but you know what, you’re going to be gone, and we’re going to be here paying for this. It’s like, as we talked about earlier. It’s like an NFL stadium, isn’t it?

Mollye Barrows:                Yes, exactly. We were talking about that and that’s a story I did some months ago. But, you know, they talk about how, what an economic incentive it is to bring in a new stadium to a community. But the fact of the matter is it really doesn’t. Cities are stuck with long-term financial plans. They’re stuck basically bearing the burden of this. It never brings in the sort of business that everybody expects around the stadium. Usually they’re in neighborhoods that need an economic shot anyway. And there might be a few businesses that pop up, but for the most part, the burden is borne by the city government to pay for this monstrosity that ages out fairly quickly. And to a great extent, you have something with Amazon and these other businesses.

Mike Papantonio:             Why are you complaining? It’s like, it’s like off, it’s like letting this alien in that is, you know, from Mars and yeah, come on in the living room. And before you know it, not only are there rearranging the furniture, they’re taking possession of your house.

Mollye Barrows:                And that’s exactly what this mayor of Seattle said, this former leader in Seattle, I should say. He, he told CNBC that, you know, we, we were all excited when Amazon came into our neighborhood. And by the way, we’re not excited anymore. I was a supporter. Now I’m turned opponent. When they come into a community, they drain the resources. And that was what they were concerned about in New York.

Mike Papantonio:             It’s almost like they’ve charmed the folks there in New York into believing that this is some great relief but it’s not is it?

Mollye Barrows:                No, it’s not. And their latest tax report has given naysayers against Amazon, certainly more ammunition because 2018, their federal tax report came in and basically they paid zero back into the public coffers when they’re making, you know, billions, $11 billion in profits in 2018 and yet nothing was given back to the public folks. And of course, part of the benefit of that was because of Donald Trump’s tax plan that he changed, passed into law in 2017. also, tax credits for executive stock options, but basically opponents in New York City Council, this gave them the ammunition to say, hey, we made the right call by pushing back against the Amazon. We don’t care where they go, but they don’t need to be here.