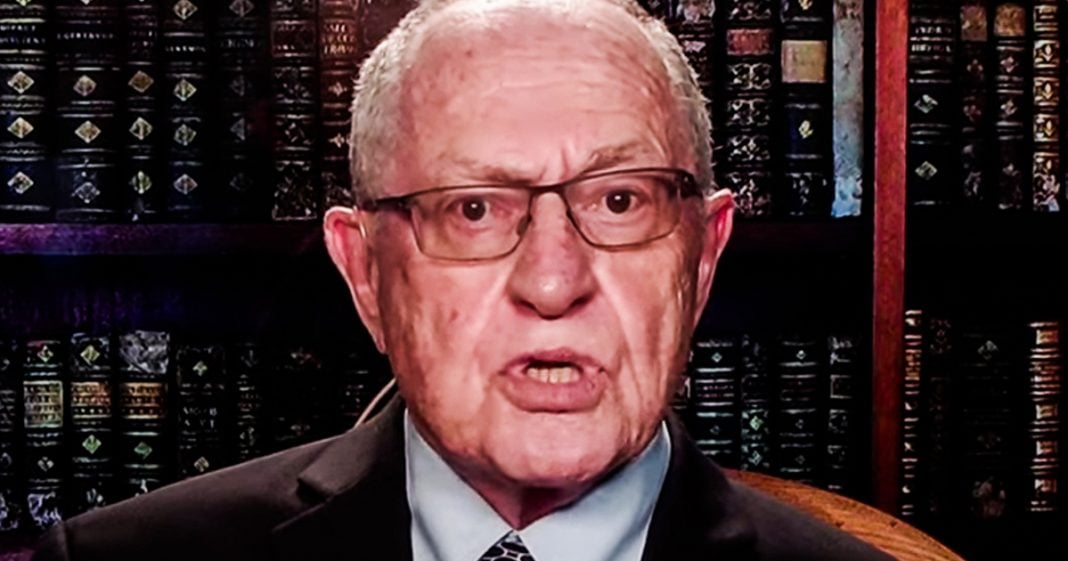 Epstein pal Alan Dershowitz has filed a complaint against Dr. Bandy Lee, the Yale psychiatrist who has led the charge in alerting the public about Donald Trump’s dangerous mental health problems. Epstein is furious that Dr. Lee suggested a “shared psychosis” among Trump supporters, and now he wants to get her fired from her position. Ring of Fire’s Farron Cousins explains what’s happening.

Donald Trump supporter and one of Jeffrey Epstein’s former bestest best friends, Alan Dershowitz, has a problem with Yale psychiatrist, Dr. Bandy Lee. Now, we have spoken about Dr. Bandy Lee countless times here on Ring a Fire, she was the editor, the one who actually put the book together, The Dangerous Case of Donald Trump. That’s where all the mental health professionals wrote articles for this. They put in their medical opinions about Trump’s mental status and how bad it is. Dr. Lee herself has been out there giving interviews, talking about how dangerous Trump’s mind is and Dershowitz being a Trump supporter and also irrelevant to this story, but good friend of Jeffrey Epstein, I love saying that, Dershowitz has had enough. And Dershowitz this past week after Dr. Lee criticized him, decided he was going to send a former complaint, formal complaint to Yale where Dr. Bandy Lee is employed trying to get her fired. He wrote an op-ed where he attacked Dr. Lee and this is what he said in part of that op-ed, he said, publicly offering professional opinions or diagnoses in the absence of a psychiatric examination is a violation of psyche, psychiatric ethics, and the rules of the American psychiatric association.

Dr. Lee has a history of such unethical conduct. She previously diagnosed president Trump as being psychotic. Now, she is doubling down accusing me of having a shared psychosis with president Trump and having wholly taken on Trump’s symptoms by contagion. What Dershowitz is referring to there is that about a week or so ago you had Dr. Lee talking about the fact in response to Richard Painter, talking about the fact, that Dershowitz started using the same language Trump did, you know, that, the perfect phone call. And then Dershowitz started using the word perfect shortly after Trump did in a very strange way, but similar to Donald Trump and Dr. Lee suggested, she didn’t even diagnose you Dershowitz, she suggested there’s, this is a symptom of shared psychosis. So this could be something that’s happening. Well, Dershowitz didn’t like it. Dershowitz doesn’t like to be called crazy. So he sent the complaint, he wrote the op-ed and he thinks that is it.

Let me, let me go ahead and tell you something, Dershowitz. Yeah, sure, psych mental health professionals, I guess, they have the Goldwater rule. They’re not supposed to diagnose somebody based on public appearances or speeches or things like that. Yeah. It’s probably bad for them, yet lawyers get to do it all the time. Right? I know you’re not diagnosing people, but how many times do you turn on the TV and you see a lawyer out there giving, like Dershowitz actually, giving their opinion on a legal case that, that they haven’t seen the documents for? That, that they haven’t talked to the witnesses of, but they’re giving their opinion? How that any different, honestly? Somebody tell me how that is any different than what Dr. Lee is doing. You’re a professional. She is a professional. You know your profession. She knows her profession. You know what to look for in yours. She knows what to look for in hers. Your complaint is going to go nowhere, most importantly because Dr. Lee says she is not going to back down and this country will be a better place because she is going to stand her ground.