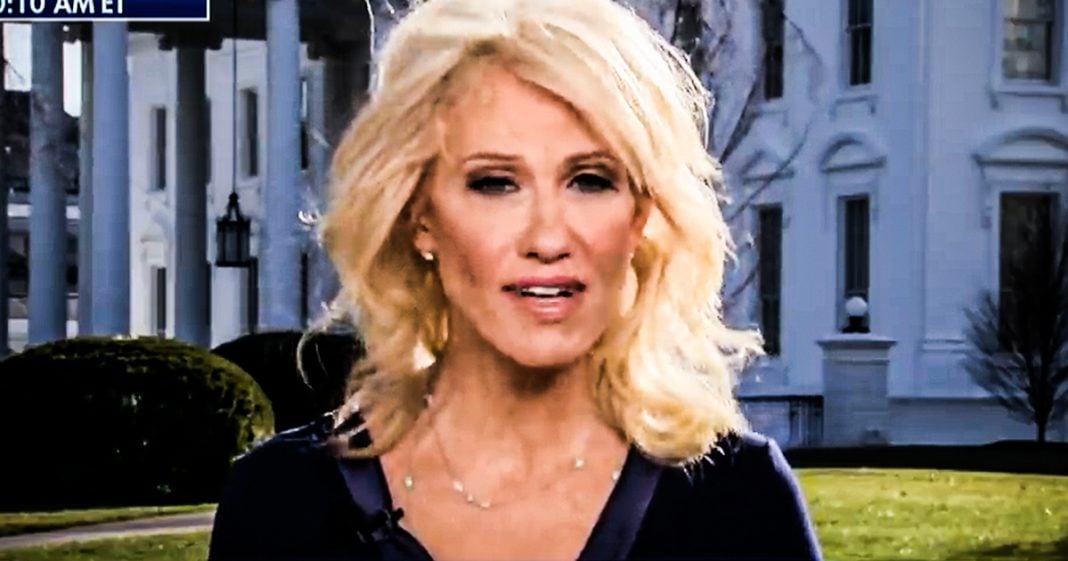 Kellyanne Conway repeatedly ducked a “yes or no” question from Fox News anchors about whether Lev Parnas was lying about knowing and working with Donald Trump. She couldn’t even bring herself to say that Parnas was lying given the amount of information, along with pictures and videos, that Parnas has released. She looked scared and more unprepared than usual for this question, and Ring of Fire’s Farron Cousins explains why.

Yesterday morning following Wednesday evenings, massive revelations by Lev Parnas. Kellyanne Conway was invited on Fox news where I think she thought she was going to be able to attack Lev Parnas defend the president and then go about her day. But unfortunately for Kellyanne, like most things in her life, it really didn’t go her way. And when asked a very simple yes or no question, she seemed to panic quite a bit. Here’s the clip. What is the white house’s position and his allegations that are now?

Well, I remember people go on TV or never under oath. Uh, this is someone who hadn’t come forward to his own volition. He was arrested and then indicted on some pretty serious charges. And when you have the vice president’s chief of staff, my colleague Mark Short this morning saying that the Democrats own witnesses in the house completely, um, subvert and under caught what Parnas is saying here about the VP, you have the attorney general’s spokeswoman saying 100% false. When I spy the mat, I’ll show to comment. I think that speaks for itself, but there is a pattern here, bill and Sandra. The media and the Democrats love to imbue credibility and legitimacy on whomever, whatever, and wherever is tried to take down president Donald John Trump, and that has to stop. It’s Avenatti on TV for 250 some times in the space of a year. Uh, speaking, I’ve indicted and disgraced, uh, or it’s Michael Cohen.

It’s John Dean. Now it’s Lev Parnas. Anybody who’s out there who wants to take down president Trump when, when they’re facing problems themselves or when they can’t, they can’t resist the glare of the spotlight, the clean lights, they all of a sudden have credibility and legitimacy. What you’re saying about are you, are you saying flat out 100% what he alleges is not true. Yes sir. Well, what left part when Lev Parnas says seek it in the court of law. When he says the president knew all of my moves, he gave consent. Objection. You cannot say what somebody else knew or thought. You can’t do that. And so this is a TV that was a TV show, not a court of law. And this is somebody who, I guess lied to the authorities about his wealth when they were setting his bail because you remember he’s been indicted and the president, I think you should go by what the president himself has said.

I remember this. This started out, we’re going to find those 70,000 votes and switch the election to Hillary Clinton. Then. Then we’re going to do Russia collusion. Wait, there’s going to be recession. Then we’ll have two years of a mother investigation. Didn’t find anything there. Now it’s a call with Ukrainian president. You know, the major networks have spent a less than 1% on the presence economy and most of their time when you screen is he lying or not Kellyanne? Well, he’s a proven liar. He’s been indicted. And so I’ve never look, I’ve never heard the president mentioned this person to me ever a single time.

Now we have seen Kellyanne Conway absolutely go off the rails in interviews in the past, right? Yelling, shouting, creating fake attacks like the bowling green massacre. That never happened. Uh, this wasn’t quite one of those. This was something different

and something a little more scary for Kellyanne because you can see it in her face and you can hear it in her response. She was panicking on the inside. She wasn’t exactly sure what to say or how to say it. So she went back to those same stock Republican talking points that we’ve heard for the last 48 hours that, well, I mean you can’t, you can’t trust love. Love was indicted, right? I mean, he, he’s a liar and that’s why he was in Detlev was not indicted for lying. He was indicted for, uh, you know, campaign finance violations with all the money he was giving to Republicans Kellyanne. That’s why the guy’s going to jail. And now he’s trying to save himself by turning over all the records he has about the Donald Trump organized crime administration. But that’s all beside the points. We all know what Lev Parnas has accused this administration of doing. We’ve seen the GAO report that says, yep, they broke the law. What you were asked wasn’t even about the criminal activity. It was a straight up yes or no. Does Donald Trump know left Parnas? Does he know him? Does he know him? Not, did he work with him? Not did the two sit there and map out their crimes together? Does he know who this guy is? And Kellyanne couldn’t answer.

Is Lev Parnas telling the truth was a question she was asked yes or no? Is he telling the truth? And she couldn’t answer that either. She couldn’t answer any of these very simple yes or no questions, which again is odd because Kelly Anne Conway has no problem lying. But she wasn’t even able to muster up a lie and say, Nope, president doesn’t know him. Nope. President didn’t, uh, do crimes with them. Nope. Left Parnas is not telling the truth. She could have done that. We expect that from her, but she couldn’t even bring herself to do that. And the reason is because, yeah, we know that Parnas knows Donald Trump. We know that Trump knows love. Parnas pictures have emerged numerous different pictures and videos of Parnas with the president of the United States along with photos of Parnas with Florida governor and avid Trump supporter. Ron DeSantis, photos of him with house minority leader, Kevin McCarthy, photos of him with vice president Mike Pence. This guy was everywhere in Republican politics. Everybody knew who he was, and apparently a lot of people also knew what he was up to. Parnas was working on behalf of Rudy Giuliani actively with Rudy Giuliani who was good friends with him. Giuliani is good friends with Donald Trump. There is no way Donald Trump was not aware of what Parnas was doing, and that is why Kellyanne Conway couldn’t answer those. Very simple yes or no questions because I think at this point, even she sees that lying about this isn’t going to get them anywhere.