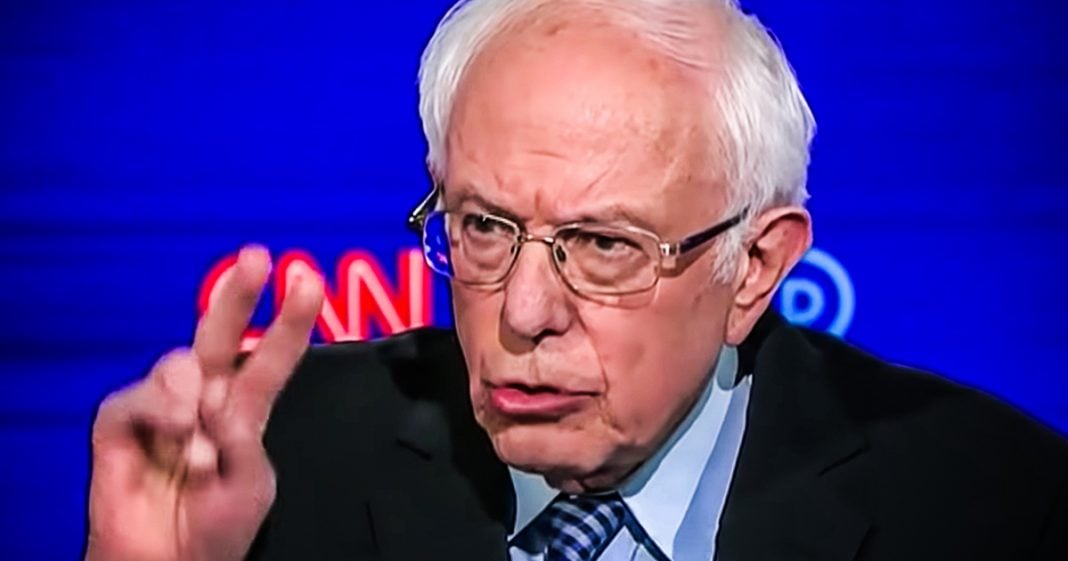 A new poll conducted by Reuters reveals that we have a new frontrunner in the Democratic Race for the nomination: Bernie Sanders. Sanders now holds a one-point edge over Joe Biden in the latest poll, which incidentally was conducted AFTER the CNN hit pieces on Sanders were run. This means that CNN’s attacks have failed, and the public is more on Bernie’s side in this feud than Warren’s. Ring of Fire’s Farron Cousins explains what’s happening.

According to the latest round of Reuters polling, which was conducted this week, we have a new front runner for the democratic race for the nomination. And that front runner is Bernie Sanders. Joe Biden is no longer sitting at the top of the polling. According to this one new poll, Bernie Sanders is Bernie Sanders received 20% of the responses when people said, who out of all these Democrat democratic candidates do you want to see most as the nominee? Bernie Sanders got 20% Joe Biden got 19% so there’s only a one point difference in most headlines about this story are saying it’s a tie. Last I checked 20 was not equal to 19. I mean I’ve actually been helping my a grade school kids with their homework a lot, their math homework and earlier this year, you know they were having to do the greater than, less than or equal to. So yeah, I’m pretty up on the numbers thing and 20 is greater than 19 they are not equal to, so they’re not tied Bernie’s ahead. So let’s get that straight. But I’m also going to pepper in some really bad news about this poll in just a second. But let’s go through the other numbers of the other candidates. 12% said they would vote for Elizabeth Warren. 9% backed Michael Bloomberg. That number is way too high. And sitting down there at the little bitty bottom is Pete Buttigieg with only 6%. Now, this poll, the interesting thing about it is that this poll

was conducted AF stir the democratic debate. So after the exchange between Bernie and Warren after the whole Diddy, or did he not say that a woman can’t be president after this weekend’s shotty hit piece on Bernie saying, Oh, is his team’s out there telling us how to attack Elizabeth Warren? That proved to be completely false. By the way, after all of that nonsense, Bernie Sanders Rose two points since last week. So all of these hit pieces from CNN failed, not only failed, backfired on them because Bernie went up and everybody else remained flat. In fact, over the last three weeks, only two candidates have seen their poll numbers rise. According to Reuters, Bernie Sanders and Joe Biden, everybody else is remaining stagnant and we have seen the other polls come out recently. Bernie is in a statistical tie for the lead in Iowa. Bernie is killing it and New Hampshire, Bernie is rocking it in Florida and California folks. Bernie Sanders becoming the nominee is no longer a pipe dream for those of us who consider ourselves exceptionally progressive.

Yeah, he’s the front runner. Now, the bad news, I mentioned the bad news, and this may negate single thing I just said, is that this poll is not reliable. I have said repeatedly on this program here that we are taught in political science research methods, which details polling how to do polling and what polls to trust to never trust any poll with a margin of error greater than 3% and you shouldn’t. This poll has a 5% margin of error, which calls into question all of the results. That’s disappointing. Right? It is disappointing because it means that we can’t believe these numbers that I was just talking about how great they are. So unfortunately, yeah, I did kind of just negate everything I had previously said with the exception of one thing, Bernie is statistically tied for first in Iowa. He is first in New Hampshire. He is gaining in South Carolina. He is the clear front runner in both Florida and California. At this point. He is gaining in Nevada. He is picking up endorsements left and right over there. So really this pole with his unreliable as it is, doesn’t, I guess negate everything I had previously said, because Bernie is surging, other folks are falling flat or sometimes losing support. And more importantly, the hit pieces that CNN has been trying to use to take down Bernie Sanders presidency have only made him stronger.