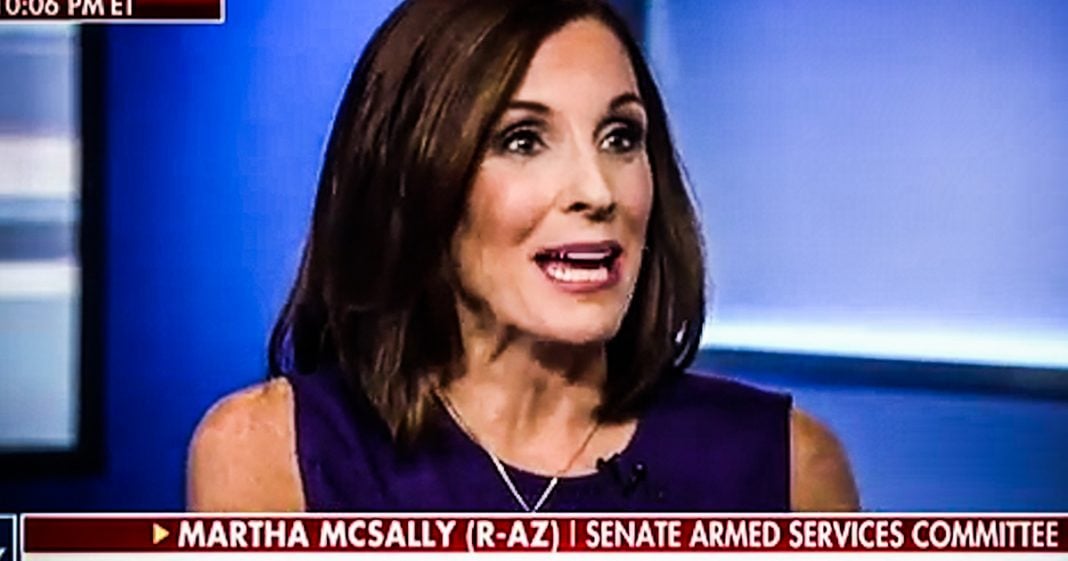 Republican Senator Martha McSally felt like she scored a major victory on Thursday when she called a CNN reporter a “liberal hack,” but all it proved was that she has no response to any of the hard questions that are being asked. If Republicans can’t handle a simple question in the hallways, how are they going to respond when their constituents ask these same questions back home? Ring of Fire’s Farron Cousins discusses this.

Well, yesterday the Senate was sworn in for the impeachment trial that is set to start on Tuesday and obviously the press had a lot of questions. They wanted to ask people about how this trial is going to work out. Well, one CNN reporter actually had the, uh, I guess you’d call it an opportunity to speak with Republican Senator Martha McSally. And just straight up asked her, are you going to allow witnesses in your trial? And McSally responded like the mature adult that she is. Here’s the clip.

[inaudible] consider new evidence as part of the trial. You’re not going to comment

now. I am no fan of CNN. I have made that clear over the years. I cannot stand the network. But right here, this wasn’t a partisan hit job. This guy was not acting as a liberal hack as McSally claim. He was straight up asking a question that the majority of people in this country would like to know. Are you gonna allow witnesses? McSally, you’re a liberal hack. You’re liberal hack. I’m going to my room. I mean like a, like a moody, pouty teenager whose parents are just trying to ask how their day went. McSally couldn’t even answer that very simple question and came across looking like a petulant child, but not in her mind. No McSally thought she was the hero in that situation. And apparently so did every other member of the Republican party and the Republican media because Fox news later that evening invited McSally on so that she could take a victory lap lap and laugh about how rude she was to that reporter trying to get a straight up answer from her. Here’s that clip.

Senator, do you regret what you said? Uh, no, Laura. I do not. And I said it again actually. As I went in, I said, you’re liberal hack, buddy as you know. I mean these, these CNN reporters, but many of them around the Capitol, uh, they are so biased. Uh, they are so in cahoots with the Democrats. They so can stay on the president and they run around trying to chase, you know, Republicans and ask trapping questions. I’m a fighter pilot, you know, I called it like it is. Uh, and that’s what we see out of the mainstream media and especially CNN every single day. Uh, so obviously, uh, I’m gonna I’m going to tell the truth and I did it today and it’s laughable how they recently were saying you’ve gone full Trump. Well, they’ve also said that it was unbecoming a Senator and I lashed out,

what do they say? Make Sally’s happy, right? I mean, look, I call this guy that’s so funny, Laura. Oh my God. Did you see what I did to them? Wow. See, here’s the thing about McSally. McSally’s never won an election for the Senate. She lost in 2018 to Kirsten cinema, but then John McCain passed away. So Arizona had a vacant Senate seat. The governor appoints McSally, even though she was already a Senate loser, she is now up for reelection again. John McCain, if he had held the seat, would be up for reelection this year. But now it’s McSally’s and she’s up and McSally didn’t fare so well against her democratic opponent in 2018. In fact, losing by two points, which would have been four and a half points, had the green party in the state not gotten roughly two and a half percent of the vote.

That’s not a knock at the green party either way. It’s just showing how weak McSally is. She’s not going to win reelection. She is now officially the least liked Senator in the United States. She has now passed Ted Cruz for that title. Martha McSally, most people throughout the country hater and she’s sitting there on Fox news, yucking it up after insulting this poor reporter who asked a very simple question, but honestly it worked out in McSally’s favor because it gained her an audience with the president, at least figuratively speaking because Donald Trump, his campaign then sent out an email asking people to help raise money for Martha McSally. He’s doomed Senate bid in Arizona. So she is going to raise money off this off that little 10 15 second clip of her yelling at CNN for no reason. And another thing that’s interesting to me is that in that Fox news clip, she’s like, Oh well CNN is awful.

They do horrible that she couldn’t even offer one. A concrete argument about why CNN is actually bad, and two, she couldn’t even provide an example of any of the things that she did try to claim about the network. See it in is awful because they’re controlled by corporations and they attack anyone who threatens the power of those corporations. That’s why they’re so bad, Martha, but you think they’re bad and Trump thinks they’re bad because they report the truth about Trump and they’re not exactly nice to this horrid president who constantly insults the network. You know y’all have your own thing happening with CNN. The rest of the public understands that CNN is trash because they have no journalistic standards. See the difference between them? It’s not the same. We don’t hate CNN for the same reasons. Our reasons are legitimate and we’re able to provide them for you. When you ask you on the other hand resort to these ad hominem attacks and say, Oh, well, they’re just, I mean they’re biased. Everyone in Congress that they send their, the CNN sends their, it’s just awful. They’re bad, bad people, and I yelled at him and now the president’s trying to raise money for me. McSally got every single thing she wanted from that exchange, except of course a higher approval rating.