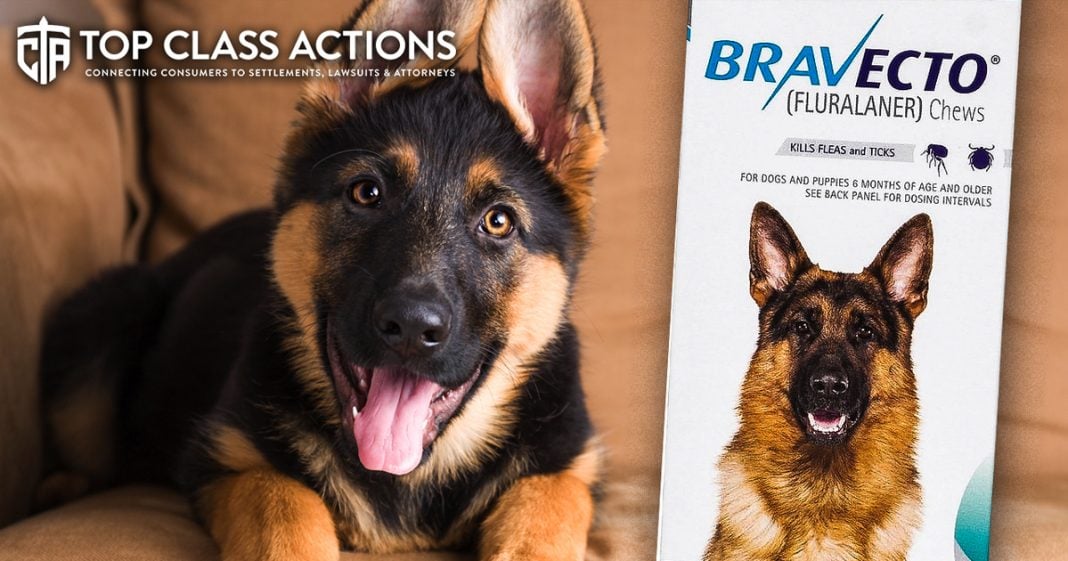 Merck Animal Health has been hit with a class action lawsuit by consumers who claim that their dog and cat drug Bravecto contains a pesticide that is harmful to pets. Bravecto tablets and topical medications are used on both cats and dogs, and are marketed as a way to prevent ticks and fleas for up to three months. Plaintiff Valerie Palmieri says she paid just under $50 for one Bravecto chewable tablet to treat her 78 pound German Shepherd Jake for fleas and ticks. Ring of Fire’s Farron Cousins discusses this with Scott Hardy, the President of Top Class Actions.

Farron Cousins:                  Pet owners here in the United States consider their pets more than just an animal. It’s a member of the family. And as such, we want to take as good of a, as good of care as we can of that family member. We give them the best foods and we give them the best medicines. But unfortunately sometimes just like medicines for human beings, those medicines for pets can actually cause more problems than they solve. Joining me now to talk about what’s happening is Scott Hardy with Top Class Actions and Scott, this is a difficult one. This story is very sad, the plaintiff in this particular case. So I’m gonna let you lay this out for us. Tell us what’s happening right now.

Scott Hardy:                          Thanks Farron. So Bravecto is a pill that you can give to your dog and that dog should be safe from getting fleas or ticks for about three months. So it’s especially helpful in the summertime. You know, you give your, give your pet this one little pill, they can walk around in the grass. Don’t have to worry about Lyme disease, don’t have to worry about other problems. And the thing is these pills work. You know, we gave our, our favorite mascot, Barkley this pill. Thankfully he was fine. And when we’re out there running through the grass in Maine and New York, he’s perfect. But now we find this insidious issue like we have, as you said, with the major drug companies where it looks like they knew that this drug could actually cause a problem for dogs. But they didn’t tell anybody, even though the FDA said, hey, you need to do it.

So in this case you have a pet owner who gave their dog Bravecto, a German shepherd. This German shepherd started to get ill, started to vomit, it couldn’t eat, took it to the animal clinic, the, you know, and, and the, the, the vet said, yeah, it looks like it might actually be a problem with this drug. She called, the owner called the makers of Bravecto and Merck said, hey, we’ll pay for your vet visit, but you need to sign this little release of liability saying that it’s not our fault. Well, they said, no way. You know, we’re not going to try to hide this from other pet owners. If Bravecto has a problem, then, you know, people need to know about it. So the dog keeps getting sick, is actually getting diagnosed with meningitis and the meningitis is connected to an allergic reaction from Bravecto. And that’s why this class action was filed, after we find out that the FDA issued an alert about possible neurological events connected to this and similar drugs.

Farron Cousins:                  Right. They actually, they, they refer to it as Bravecto Toxicity. I mean, it, it, it’s, you know, common enough to actually have its own terminology here. And part of the issue for this is yeah, obviously if this is a three month, you know, dosing, then it’s got a lot of active ingredient in it, enough to last this animal, whether it’s a, you know, 80 pound German shepherd or a five pound Chihuahua, it lasts for three months. And animal bodies cannot process things the way a human body can. And when you, that thing that they’re trying to process turns out to be a pesticide, which is what these flea and tick medicines are, that can cause huge problems in the animal, especially in such large doses.

Yeah, it’s easier. That way you know you don’t forget your pet is always protected, but these are very large doses of pesticides going inside of these animals and, you know, that, obviously as this lawsuit claims, we’re seeing huge problems with that. The FDA says we’re seeing huge problems from that and this is terrifying for pet owners. I mean, this, this story, this woman’s German shepherd did not get better. Right? I mean, you know, I know that might be a little bit of an aside here, but this isn’t something that just kind of clears up this, this toxicity and then it goes away and then the pet is fine. This is a almost life altering, at least in this one instance that we know of for the life of the animal.

Scott Hardy:                          Exactly, you know, this woman, they had to bring their, their German shepherd back into the hospital, the animal hospital multiple times. They’ve racked up tens of thousands of dollars in debt because of these hospital visits. It’s not something that, as you said, their dog has just got better. You know, the FDA issued that warning to highlight neurological events because these events were seeing consistently across the isoxazoline class of products, which are these, as you said, these pesticides that we’re given these dogs and cats so they don’t get ticks. But Bravecto failed to disclose these risks to consumers and misrepresented the safety of the product. That’s what this class action and these lawsuits are alleging is that, you know, Bravecto and Merck knew about these problems.

The FDA said you have to warn people, but Merck didn’t tell and failed to warn vets about these problems, hospitals that are prescribing it. They failed to warn owners that this could, that this drug could put their dog or cat in the hospital and, and rack up thousands of dollars in bills. We’ve had more than 673 comments on this, on this lawsuit so far. So we know there are a lot of people out there who are impacted by it.

Farron Cousins:                  And one thing consumers need to do, and it’s a little bit harder to do this when you’re, when you’re dealing with a vet, because typically you go to the vet, they say you need this medication. Let me go grab it from the back. We can actually give it to your pet right now if you want us to. Versus a human, you go to the doctor, you get your prescription, you go to your pharmacy, you’ve got time in between. But vets will often have it on hand and say, do you want us to go ahead and give this to us. Before that happens though, this is what consumers need to do. Check up on the medication, look it up, look for any FDA warnings on it. Look for any lawsuits on the medications. Because in many instances, you know, as this case points out, the vets were not told the information by the company.

So not saying vets aren’t, you know, informed on this. Sometimes they are and they will tell you, but if they’re not, you need to take that extra step. Look it up on he FDA, see if something has happened with this. See if there’s lawsuits before you put that in your animal and for more information about this, please follow the link in the description of this video. Head on over to Top Class Actions and make sure you sign up for their weekly newsletter. Scott Hardy with Top Class Actions, always a pleasure talking to you. Thank you.