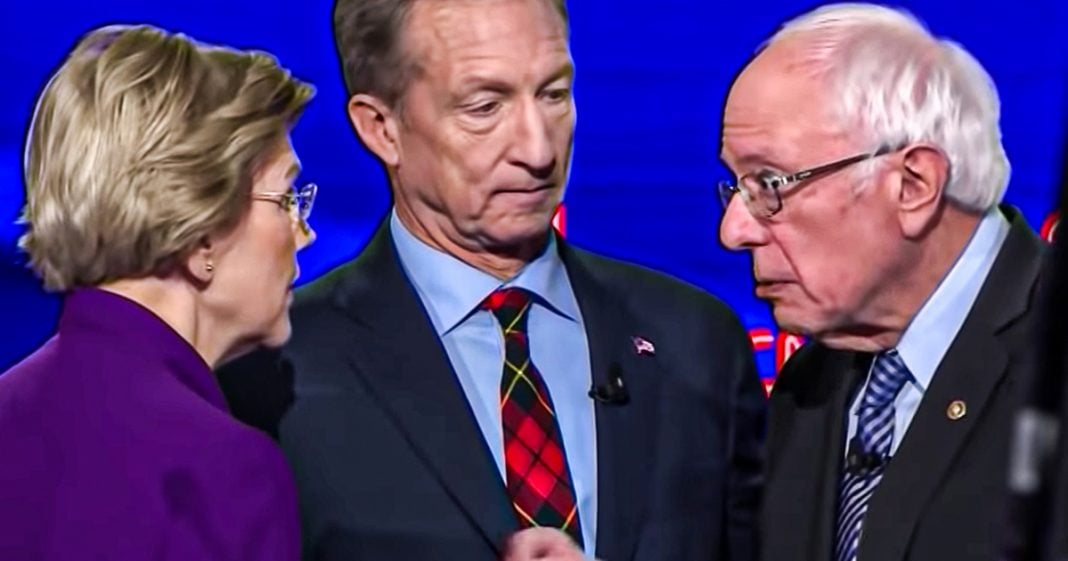 CNN finally released the audio that they apparently forgot that they had of Elizabeth Warren and Bernie Sanders having a tense exchange after Tuesday night’s debate. Warren tells Bernie that he called her a liar on national TV, and Bernie says that Elizabeth did the same thing to him and that they could discuss it later. Ring of Fire’s Farron Cousins discusses this.

Well after letting the public argue for 24 straight hours about what may or may not have been said between Bernie Sanders and Elizabeth Warren and their quick little post debate exchange, CNN suddenly remembered last night that, Oh yeah, we have the audio of that. So I guess we can keep the story alive for another news cycle if we go ahead and release it now. So in case you haven’t seen it without further ado, this is what was actually said between Elizabeth Warren and Bernie Sanders post debate on Tuesday evening.

All right. Several things obviously to address with this little clip. First and foremost, Elizabeth Warren’s claims, walking right up to a Bernie and saying, uh, I think you just accused me of lying on national TV. Bernie responds. I, yeah. Well, you also accused me of of lying too, not let’s not do this here. Um, they did. They both accused the other of lying. Bernie Sanders said, no, I didn’t say the thing Elizabeth Warren says. I said, and uh, she’s also not being honest about being the only Republican to unseat a, uh, oral only Democrats accuse me to unseat a Republican. He did it too and it was within the 30 year time frame. That was a weird awkward exchange between the two. That probably should never have happened. But here’s the thing, somebody is not being honest about the conversation that took place in December, 2018 where Bernie allegedly said a woman can’t win.

Either one of them is forgetting the context or missing the context or intentionally leaving it out to make it sound like the conversation was worse than it was. We need the rest of the information or more importantly, we really don’t. We need to kind of move on from this at this point. All of this infighting between the two most progressive people still left in this race. Yes, Bernie is more progressive than Elizabeth, but Elizabeth is far more progressive than any of the other folks running and all of this progressive infighting is helping Joe Biden, right? I mean this is the guy that’s going out there talking about black parents need to leave the record players on so their kids can learn a little talking about kids at the pool when he was younger, rubbing his hairy legs, talking about fight and corn pop and this guy’s benefiting from all of this, from this silly stupid fight between these two people who used to be friends and that’s the other part of this.

That’s that is really sad. You saw in that little exchange right there, it wasn’t just two candidates kind of duking it out. It was a friendship coming to an end, an end. Any chance that we may have had of a unity ticket between Bernie and Warren as president and vice president. I think that’s out the window now. And that’s probably the saddest part of this. That was the winning ticket. That was the winning combination and that is gone. So I don’t know how we get that back. Can these to work this out? Should they work it out? I mean, if Elizabeth Warren is lying intentionally about what happened in that conversation, that’s not what we need. If Bernie is lying about it, if he did in fact actually say that, then we don’t need that either. I don’t think he said that. I don’t think Elizabeth Warren is intentionally lying. I think she is misremembering or leaving key parts out. Her response in the debate about the question was very rehearsed and I promise you, she spent that entire day knowing the question was coming and crafting that perfect response and it was perfect,

but now she can’t walk it back. She went all in on it. So even if she does come back later and say, Oh yeah, that’s right. He did say because of all the sexism, it’s going to be really hard for a woman to win. She can’t go back now and that’s the problem with this. We can’t go back. But what we can do is go forward or we can go forward and move on from this and focused on getting those corporate Democrats out of the race because any one of them, whether it’s Buddha judge, whether it’s Biden or whether it’s Klobuchar, any of them will lose spectacularly to Donald Trump. And we can’t let that happen. We can’t repeat the same mistakes of 2016 but that appears to be what the Warren camp is wanting to do. So division alienated the Bernie supporters claim that every one of them is a sexist Bernie bro. Even though Bernie ranks highest amongst support for women and donations from women, sure it’s a, it’s an attack that is not based in reality. But her campaign launched it this past weekend by lying about this, uh, alleged attack sheet that Bernie supporters are putting out. Bernie’s campaigners. And there’s just, there’s just no going back. So all we can do is move forward. We know what was said. Now we saw poor little Tom Steyer sitting there like a frightened child wanting a drink of water while mom and dad are screaming at each other and we have, we have to move forward from this petty argument at this point.