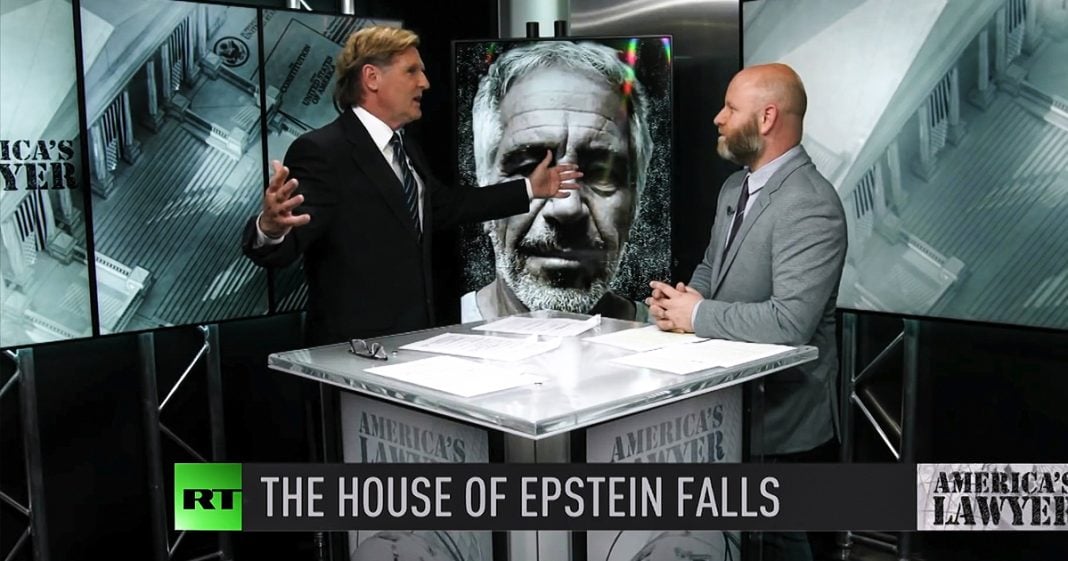 Via America’s Lawyer: Mike Papantonio and Trial Lawyer Magazine editor Farron Cousins bring us up to speed on new revelations surrounding the hotly-contested death of Jeffrey Epstein. From deleted prison cell footage, to guards ‘conveniently’ asleep on-the-job, to a new coroner’s report which suggests Epstein’s death may NOT have been a suicide, the case for exactly what happened during the late financier and alleged pedophile’s final hours remains wide open.

Mike Papantonio:             There’ve been quite a few new developments in the Jeffrey Epstein case in just the last few days. I have Farron Cousins from the trial lawyer magazine with me now to talk about those new developments. Farron, you know, this story is really never going to go away. You understand, we’ll still be reporting on the Epstein saga, but this is, this story comes to me. I, Sun Magazine is a, it’s a UK product and they had a picture of Bill Clinton on an airplane, not with just Maxwell, who was the pimp for Epstein, but with one of the women who says that she was abused and raped by Epstein. Give me your take on this story.

Farron Cousins:                  Right, and Bill Clinton walks in. Kevin Spacey walks in. Chris, not Chris Tucker, or I believe it was Chris Tucker and she said the whole time she’s, you know, chatting it up with Bill Clinton, she’s being forced to dress in a pilot’s uniform so that she looks professional. But she did say, you know, Bill Clinton was a total gentleman, a gentleman. They got to Africa. She went shopping with Bill Clinton. They chit chatted. She helped pick out a present for Chelsea Clinton while her and Bill were out shopping. But she swears nothing happened between the two. But at the same time, we know who Epstein is. Bill Clinton claims he didn’t know at the time. We know who Maxwell is now. Clinton says he didn’t know. And this, this young woman who was a victim, a sex slave for all practical purposes, palling around in Africa with Bill Clinton, the former president, and you don’t bring it up. I mean, I wish she would have.

Mike Papantonio:             Here, here’s what bothers me about this story. It’s not, look, she can say whatever she wants about her day with Bill Clinton. But the truth is, Bill Clinton made more than 20 trips on the Lolita Express. On this one trip, we don’t know a lot of, you know, we don’t have all the facts, but we do have her, his arm around her, his arm around the pimp who worked for Epstein, Maxwell. And the real issue to me is do you really think it’s credible that Bill Clinton says, I didn’t know anything about what happened in South Florida. I had no understanding about the fact that, that he spent time in jail for this.

Although it was, it was a ridiculous, he had to, he had to show up for jail for I think four or five hours a day and then he could go home. Something ridiculous like that. But to say, I just didn’t know any of, any edge of the story. Everybody in the country knew the edge of this story, including the people that Epstein was giving money to, like MIT and all of these social elite types up in New York who would have Epstein giving money to their favorite charity. All the cats in LA that would just embrace Epstein. They were part of his family after they clearly knew that the guy was a serial pedophile.

Farron Cousins:                  Well and to me another part of the Bill Clinton story that’s very odd is this is a guy, again former president. He has secret service protection with him 24 hours a day. How is he walking around in this little African village with this woman who he doesn’t know? What, what did bill think was happening? What did he think her role was? Because I think, you know, for me personally there’s a lot of pieces missing from this story. Bill Clinton doesn’t just pick up or hang out with random people he met on an airplane five hours ago. That, that’s not normal behavior.

Mike Papantonio:             Yeah, the report on this actually suggests there’s more to the story.

Mike Papantonio:             We don’t know more of the story but to say that the president, a onetime president of United States just didn’t know that this guy had been arrested for raping teenagers. Literally raping teenagers, had been arrested and is put in a cell that is like a free get out of ticket, it’s a get out of jail free, because all he has to do is show up for the cell six or seven hours and then leave. This story about the deletion of the video though. I mean, come on.

Farron Cousins:                  I, you know, at this point I almost feel like they want everybody to think this is a conspiracy theory because everything’s playing out that way. What we’ve learned now is that prosecutors in the Epstein case said, listen, we wanted this video from outside, outside Epstein’s jail cell from the first alleged suicide attempt. And so the prison said, okay, we’re going to give you the video. Oh, oh, it looks like that video was deleted because we accidentally in the file system.

Mike Papantonio:             Here’s where it gets weird. Now, that computer deletion of the video that, that showed what was going on in Epstein’s cell, that was the first time he supposedly tried to kill himself. And so there is a character that’s on, his cell, cellmate who is a murderer and a, you know, he, he potentially could get the death penalty. So his lawyer says, I’d like that video to show that my client had nothing to do with that and that video is missing. But the point is, everything around this, around this case right now, it just invites the conspiracy types to say there’s something going on. There may be something going on. I mean, the new coroner’s report that comes out, new coroner says, look, I can’t conclude that this was just a suicide. There are other things that lead me to believe there might’ve been other people involved.

Farron Cousins:                  You know, I, I agree with you 100%. Everything about this story smells fishy from, from a huge contacts that Epstein had. The friends he had, the report that Bill Barr may have visited the prison a few days before the suicide, the footage being deleted, the, the guards conveniently being asleep and nothing makes and sense.

Mike Papantonio:             Well, it’s either a Confederacy of Dunces, of complete drooling fools, or there’s something to this story.

Farron Cousins:                  Well, you know, and I do want to add real quick, if I can, just a anecdote about the Bill Clinton thing and this young woman, because you and I, there’s a TV studio we used to have to go to, and they had Bill Clinton come in and they told us how the secret service came and swept the whole place. Ran background checks on everyone there. And so I just, I’m sorry, I refuse to believe that.