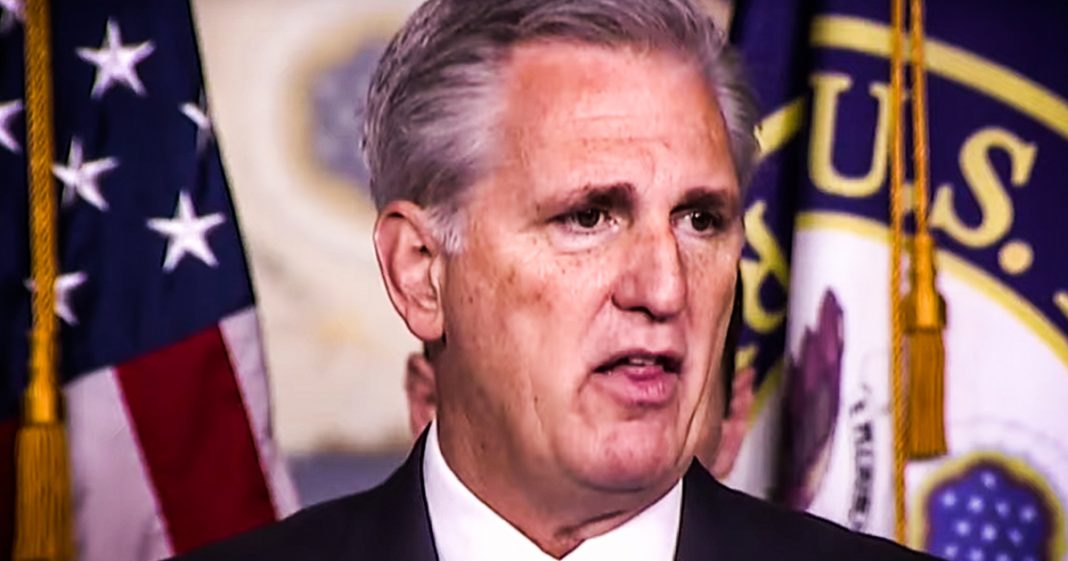 Republican House Minority Leader Kevin McCarthy is peddling conspiracy theories, claiming that Nancy Pelosi is withholding the articles of impeachment from the Senate in order to hurt Bernie Sanders and Elizabeth Warren. McCarthy is trying to play on progressive fears, but there is absolutely no truth to his claim here. Ring of Fire’s Farron Cousins explains what’s happening and why McCarthy thinks he can score a cheap win with this talking point.

You know, I like to attack Republican lawmakers all the time saying that they’re not very bright. Well, it turns out I’m wrong about that. Republican lawmakers are actually pretty smart, some of them, not all of them, not even most of them, but some of them are actually pretty smart and they know exactly what they’re doing. Take for example, House minority leader Kevin McCarthy. Now, yesterday Kevin McCarthy came out, did a little press conference where he actually accused Nancy Pelosi of withholding the articles of impeachment from the Senate in order to hurt Bernie Sanders and possibly even Elizabeth Warren. But McCarthy really singled out Sanders in his little press conference here. Here’s a couple of quotes that McCarthy had to say during this. If there’s anyone who gained from this, it would be anybody who’s running for president that’s not in the US Senate. Sanders actually has a chance to win the Democratic presidential nomination. But now, not now that Nancy Pelosi has held these documents.

And the reason I say this is a smart move by McCarthy, it’s an evil move, it’s a disgusting move, and it’s a move that I hate, but it’s smart because what he’s trying to do right now, much like what Tulsi Gabbard did, is try to sew more division within the Democratic party. Try to once again, convince the public that somehow the DNC, the Democratic party, the leadership, the, the establishment, whoever it is, whoever the boogeyman is now is somehow once again conspiring against Bernie Sanders. Look, we have seen things unfold in this primary that, yeah, the media is unfair to Bernie. The Democrats have been unfair to Bernie. He’s the victim of these vicious lies and smears, but as far as the process goes, they haven’t been going after him and McCarthy sees that. He knows how pissed off the hardcore Bernieites got in 2016 because yeah, things were rigged against him and he wants to recreate that division in 2020. He believes that that division is going to lead to a Trump reelection.

Even though that division in 2016 is not what led to Hillary Clinton’s defeat, but he’s trying to play it that way. He’s trying to paint this as something that it’s not. Now I disagree with Nancy Pelosi’s decision to withhold these articles of impeachment. It did not serve any purpose whatsoever. She is not going to get the concessions that she wants from Mitch McConnell. Mitch McConnell is not going to budge because he doesn’t have to. It’s political theater at this point and McCarthy is now trying to take advantage of that and say that Pelosi is somehow conspiring to harm Bernie Sanders. If this were true, and maybe it is, I don’t know Pelosi’s manner of thinking here, it’s very hard to follow with this issue. But if this is true, Nancy Pelosi would have to be basically agreeing that she’s going to torpedo our chances in 2020 and I don’t think Nancy Pelosi is anywhere close to being that stupid. Not at all. But McCarthy on the other hand, wants us to think that this is what is happening, so that once again, all us Bernie supporters are going to get mad at the DNC and not show up at the polls in 2020. Don’t fall for it. Don’t listen to it. This is bait. Don’t take it.