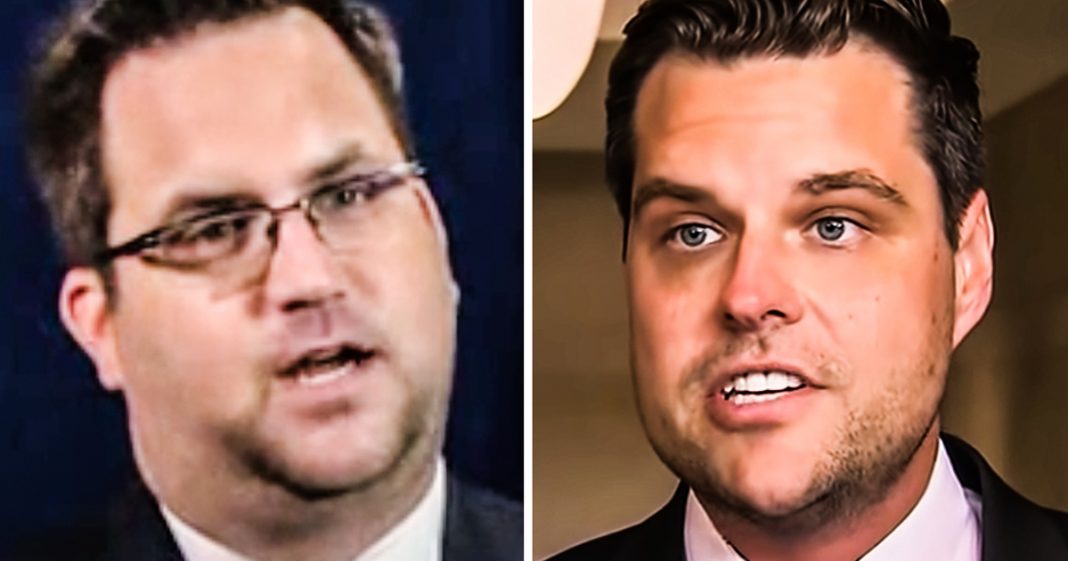 Republican Matt Gaetz got into a bizarre Twitter feud with a fellow Florida Republican lawmaker this week, attacking Chris Latvala after he posted a picture of himself talking with Al Sharpton. Things went off the rails after Gaetz attacked Sharpton and Latvala, with Latvala bringing up Gaetz’s DUI arrest and accusing him of creating a weird sex game where lawmakers get points for sleeping with lobbyists and lawmakers. Ring of Fire’s Farron Cousins discusses this utterly insane exchange.

At the request of a member of Gaetz’s staff, we are letting everyone know that there is no evidence to suggest that Gaetz created the sex game, as Latvala claims (which we also made clear in the video.)

At any given point, there’s lots of different little political feuds happening with some candidates going after other candidates, other people lying about stuff other people did. But right now there is a political fight happening that I think everybody needs to be aware of just because it is so incredibly bizarre. This is a fight between Florida Congressman Matt Gaetz and Florida state Congressman Chris Latvala. And here’s what happened, earlier this week on Twitter, Latvala posted a Twitter of him meeting Al Sharpton. That was it, you know, it said it was an honor to meet the Reverend Al today. That’s it. And that tweet with that picture of the Republican meeting with Al Sharpton apparently sent Matt Gaetz over the edge. So Gaetz responded, accused Al Sharpton of all sorts of racism and then that got Latvala furious. Where he unloaded on Matt Gaetz accusing him of creating some kind of very weird sex game during the time when Gaetz was a representative for the state of Florida.

Here’s a bit of the, the Twitter exchange that happened. Obviously, okay, first tweet was, it was an honor to meet the Reverend Al today. Gaetz responds accusing Sharpton of all these horrible things, then Latvala responds, have you been drinking tonight? I hope you don’t get behind the wheel. I know you have had a rough few days up there. Referencing of course, the fact that Gaetz just a few days ago basically got blacklisted by the White House. Now Gaetz responded, said, I spent my day talking to my friend and supporter, the president, you spent yours with Al Sharpton. Latvala goes on to respond, yep, I’m not afraid to meet with folks with differing opinions other than mine, hence why I posted the picture on Twitter and then at some point in this back and forth Latvala says the following, he says, and you created a game where members of the Florida house got points for sleeping with aides, interns, lobbyists and married legislatures, legislators, excuse me, hope DC is treating you well, Congressman.

Now Matt Gaetz then went and told the Tampa Bay times that I have no idea what he’s talking about. Maybe he’s projecting because his dad had to resign from the Florida state Senate because he got busted having sex with a lobbyist in exchange for other political favors. So there is a lot of corruption between the Gaetz family and the Latvala family. I mean these guys are absolute scumbags and the best thing about this is that when two scumbags fight, everybody else wins because they’re just sitting there exposing the secrets of one another. Now about that creepy little sex game that Matt Gaetz allegedly created, I’m going to read this. In 2013 Politicos, Marc Caputo, reported that according to the rules of the alleged game, legislators received one point for sleeping with a lobbyist. Two points for sleeping with legislative staff. Three points for sleeping with another legislator, and six points for sleeping with a married legislator.

And according to Latvala here, Matt Gaetz is the guy who created this creepy little sex game that, I guess, they all were playing. So if this feud continues to escalate, and my God, I hope it does, I would love to see Latvala come out with some kind of evidence showing that Matt Gaetz did in fact create this game. Because if you have that Latvala, please do release it. Because I live in Matt Gaetz district here. It is an exceptionally conservative district. And while they don’t care about all the horrible policies you have, they love the sucking up to Donald Trump. They love that around here. One thing they don’t like is a sex scandal. So if you could do me a favor and somehow prove that Gaetz was the one who created this, may just solve both of our problems here.