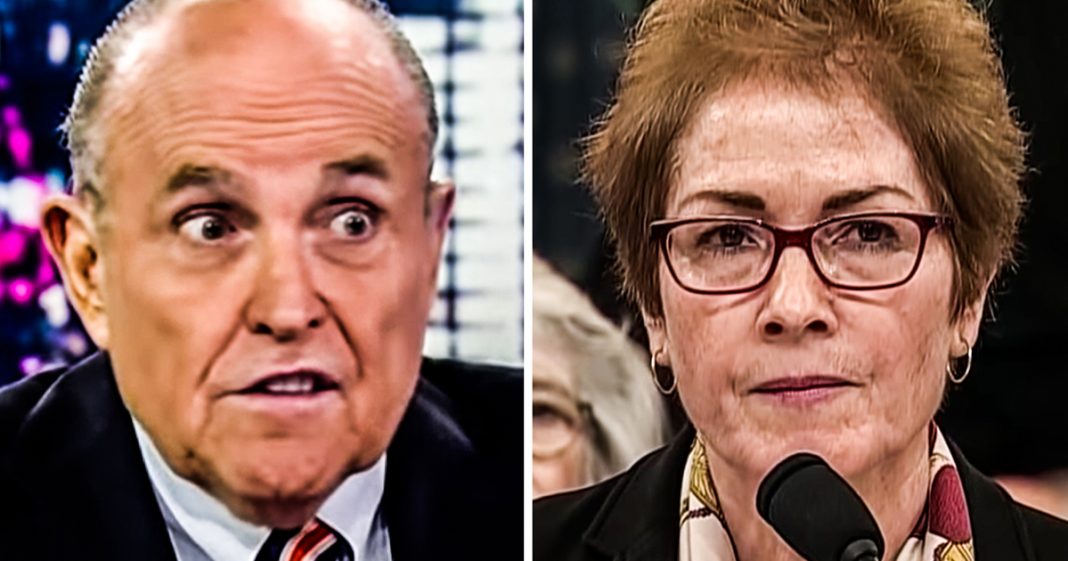 Newly released evidence by the House of Representatives appears to confirm that Rudy Giuliani was involved in a scheme to spy on former Ukraine Ambassador Marie Yovanovitch. The evidence comes in the form of text messages between Rudy and his pal Lev Parnas, where they mention that her phone and computers are turned off, something they could only know if they were physically watching her, or if they bugged her equipment. Ring of Fire’s Farron Cousins discusses these new revelations.

Yesterday, a treasure trove of evidence was released by several different committees in the house of representatives, all committees who held hearings on impeachment. And all of this evidence that they have released is evidence that was presented during those impeachment hearings that they held. It’s also part of the things that they’re eventually, I guess, going to be sending over to the Senate. And what we found out in those documents, which the ones released yesterday all happen to come from our good friend Lev Parnas, it reveals that former Ukraine ambassador Marie Yovanovitch was spied on at the request of Rudy Giuliani. That’s what we learned yesterday. Yovanovitch has now called for a full investigation into this matter after learning yesterday, as we all just did, that she was spied on by this administration. Ironically, the same administration who keeps claiming they were spied on even though they actually weren’t, they spied on her.

And here’s how we know it. According to the text messages that were released yesterday from Lev Parnas and Rudy Giuliani back and forth. You had Parnas texting Rudy saying that Yovanovitch’s phone was turned off right now, her computer is turned off right now. You know, she wasn’t near her electronics. So either, either Giuliani had his henchmen, which includes Parnas, tail her and follow her around and physically spy on her. Or they had her devices bugged so that they could determine where she was if the device was turned on, who she was talking to and for how long. We don’t know which one I guess it is yet, but that’s why an investigation is necessary. And the house has said they’re going to submit this as new evidence for the Senate to consider in their impeachment trial, which is great, right, because the Senate hasn’t even decided if they’re going to allow new evidence to come forward yet.

So, oops, Democrats again, again, you, you really screwed up there. You really screwed up there. These are the kinds of documents and the kinds of evidence that should have been made public during the hearings that you were holding. We should have known about this then because if this goes to the Senate, first and foremost, everybody right now is distracted. Trump gave a really crazy rally last night. The Democrats had a debate. Bernie and Warren are fighting. Matt Gaetz is creating sex games. Nobody’s paying attention to the impeachment at this moment and you release this info on a day when other crazy stuff is happening, it already got buried and the Senate’s going to make sure they keep it that way because if they vote to not allow any new evidence, if they vote to keep this thing behind closed doors, nobody else going to know that this stuff was released.

It will die in the news cycle as it already is and that’s what I keep saying. The public has the attention span of a drunken goldfish. They forget about things instantly. What? What? Oh my God, new scandal. Oh my God, over here is a new scandal, I, what was the, I don’t even know anymore. And it’s already over, hasn’t even been a day, and the news has already moved on. But just imagine how it could have been Democrats, had you made this public and showed that the president’s personal attorney was spying on a US ambassador working in the Ukraine. Imagine what the public approval rating for impeachment would be today if you had told us this back when people were paying attention.