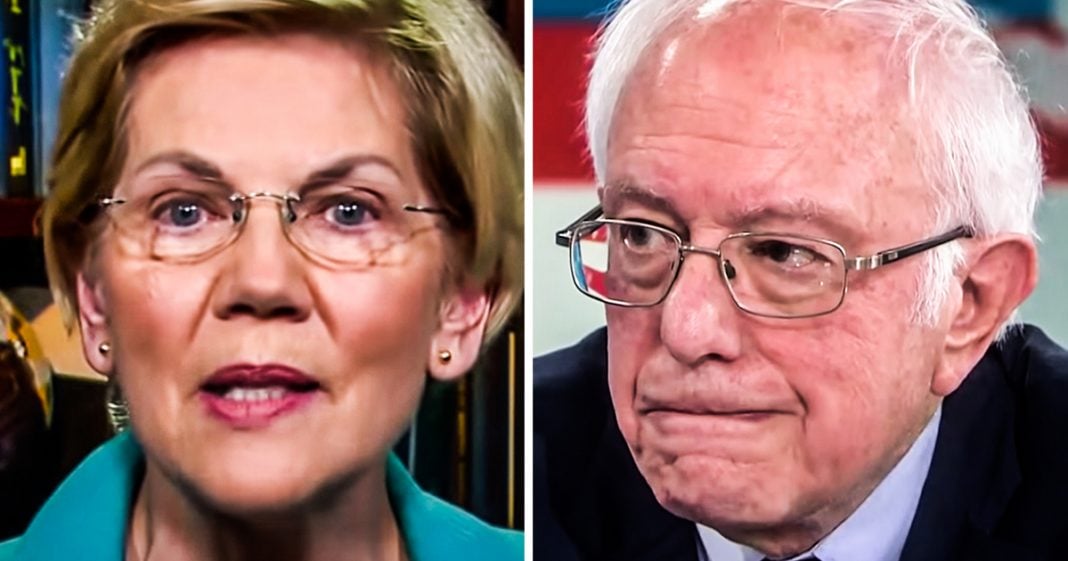 CNN ran one of the absolute worst hit pieces on Bernie Sanders on Monday, claiming that several unnamed sources close to Elizabeth Warren said that Bernie told Warren in 2018 that a woman “couldn’t win the presidency.” This claim flies in the face of Bernie’s on-the-record comments over the past 30 years, and the whole thing smells a little fishy. Ring of Fire’s Farron Cousins explains what’s happening.

All right, we got to talk about it. I don’t want to talk about it. I think the whole thing is rather stupid, but we have to talk about it. And of course, I am referring to the CNN piece from yesterday claiming that four anonymous people who allegedly heard about a meeting between Bernie Sanders and Elizabeth Warren at Elizabeth Warren’s home in December of 2018, where Bernie Sanders allegedly told Elizabeth Warren that I don’t think a woman can win the presidency. Now that story blew up yesterday and everybody, no matter where you were from, which side of the aisle you sit on, how far left you are, how far right you are, everybody had an opinion on it. Bernie Sanders immediately responded to CNN. This was his response to them, he said, it’s sad that three weeks before the Iowa caucus and a year after that private conversation, staff who weren’t in the room are lying about what happened.

What I did say that night was that Donald Trump is a sexist, a racist, and a liar who would weaponize whatever he could. Do I believe a woman can win in 2020? Of course, after all, Hillary Clinton beat Donald Trump by 3 million votes in 2016. So that was Bernie’s response to it. Hours upon hours upon hours later, Elizabeth Warren finally responded. You know, she didn’t immediately come out and say, hey, yes, this is true. He did this. She didn’t immediately come out and say, no, this is ridiculous. These, these people have made something up or misconstrued what I said, she came out later and said, yeah, he said it, but I don’t want to talk about it. Let’s all move on.

That was her weak response to all of the attacks that Bernie Sanders is now getting because of this story. Now, here’s the thing. In order to believe that Bernie Sanders said this to her, you have to ignore the fact that at least since 1988, Bernie Sanders has been saying publicly on television in speeches that a woman can win the presidency, since 1988. You also have the fact that in 2015, I guess it was, he begged Elizabeth Warren to run for president in 2016. It was only after she refused to do so that he decided to get in the race personally. He didn’t want to do it. He wanted her to do it and carry the torch. So yeah, that sounds like the actions of a man who does think a woman can win the presidency.

Lot of people have already said all that stuff though. So I’m going to bring up something that I haven’t heard anybody else say. You would have to believe that Bernie Sanders is functionally stupid to say that to Elizabeth Warren. I mean, really think about that. What kind of mental malfunction would Bernie Sanders have to be suffering under to look at Elizabeth Warren in her eyes knowing they’re both about to run for president and say a woman can’t be president. Bernie’s not that dumb. I mean, on its face, this claim is absolutely insane because he is not that stupid, but here’s what this does. Obviously Sanders is surging in the polls. You had Norman Solomon over at Common Dreams who predicted a month ago that these sexist attacks against Bernie Sanders, claiming he is a sexist, we’re going to ramp up now that Bernie Sanders is surging in the polls, and lo and behold, less than a month after Norman Solomon wrote that piece, here it is, folks. If this in fact did happen in 2018 why sit on it? Right? Why sit on it for 13 months. Never once bring it up until of course, as Bernie pointed out, three weeks till Iowa, Bernie surging in the polls, they want to take him down. They want his supporters because Warren is now sinking in the polls a little bit and that’s why this happened. That’s why this came out now.

Furthermore, you also have the fact that Bernie Sanders and his supporters, since 2015 has, have been attacked for allegedly being misogynist. All the Bernie haters out there constantly attack him as some kind of alleged misogynist. So her campaign, these alleged people who were hearing from other people who might’ve been in the room, we don’t even know, they knew that that was the main attack against Bernie. They wanted to pile onto it and stop his momentum and that is why they did this and has plenty of others have pointed out, this actually helps Joe Biden. This helps the centrist. This helps the corporatists because it pits the two most progressive people running for president against each other in a fight that could have easily been avoided. And another thing that others have mentioned is the context. What was the context of Bernie saying this, if in fact he did say it? Because as he points out in his statement, he was talking about how Donald Trump a huge sexist and actual sexist is going to use whatever he can to attack somebody.

I mean, that’s why he’s still even as of, I guess this morning tweeted out the Pocahontas thing, like he will attack you based on anything. Not to mention the fact that there is still a lot of misogyny in this country. So was Bernie referring to that? Was that the actual context? I guess at this point only Elizabeth Warren would be able to clear things up for us, but she is refusing, so far, to do so. She doesn’t want to talk about it. CNN is hosting a presidential debate tonight. Bernie will be there. Warren will be there, and I guarantee you somebody’s gonna ask about this. And we will be able to know immediately based only on Elizabeth Warren’s response, whether this story has any merit or if it’s just another vicious smear against Bernie Sanders.