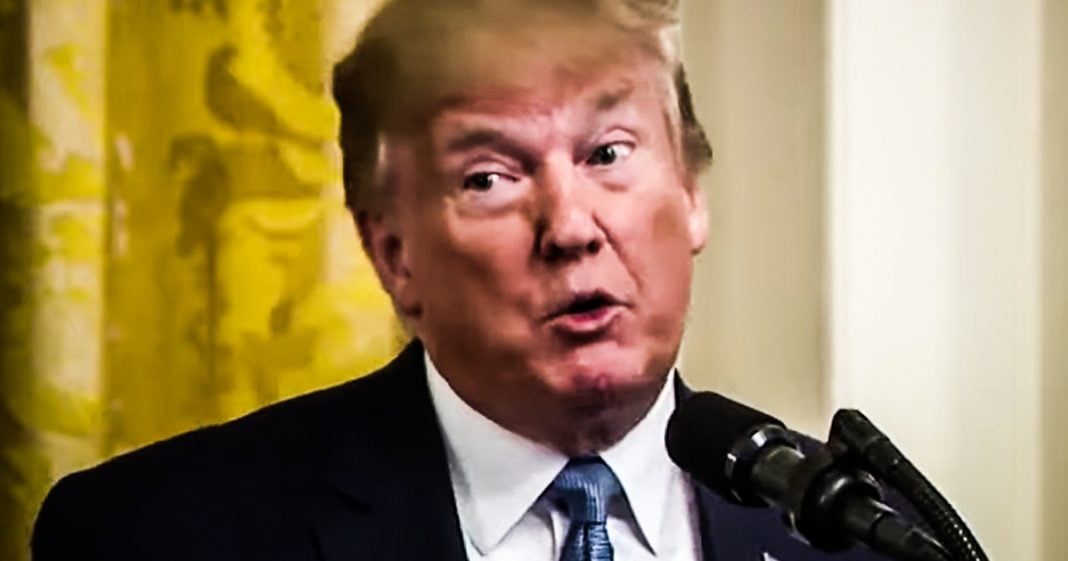 Donald Trump has told thousands of lies since he took office, but the one he told earlier this week might be the most insane lie he’s ever told. In a Twitter tirade, Trump claimed that HE was the one who protected Americans with pre-existing health conditions, and DEMOCRATS are the ones trying to take that away from them. The exact opposite is true, but is the American public smart enough to know that the President is lying to them again? Ring of Fire’s Farron Cousins discusses this.

It’s no secret that Donald Trump is a liar. I mean, at this point, we know based on what the fact checkers have told us, the man’s told well over 10,000 lies in just under three years in office. So yeah, he lies about everything. He lies about things that don’t matter. He lies about things that do matter. The guy just flat out lies. But earlier this week, Donald Trump may have told the most insane lie that I think I’ve ever heard this man tell. And here it is, in a series of tweets as usual. Mini Mike Bloomberg, first of all, mini Mike, I don’t even understand that insult. Is it just because of the alliteration there, Mini Mike? I don’t know. But anyway, mini Mike Bloomberg is spending a lot of money on false advertising. I was the person who saved preexisting conditions in your healthcare. You have it now while at the same time winning the fight to rid you of the expensive, unfair and very unpopular individual mandate.

And if Republicans win in court and take back the house of representatives, your healthcare that I have now brought to the best place in many years, will become the best ever by far. I will always protect your preexisting conditions. The Dems will not. This is crazy. This is the tweet of a crazy person because it was the Democrats who actually crafted the bill and passed the bill that actually saved people with preexisting conditions from being either kicked off their insurance or forced into a more expensive insurance risk pool. The Republicans voted against it. The Republicans for 10 straight years have been trying to dismantle it. They’re literally trying to dismantle it right now. Actually, last Friday, William Barr asked the Supreme Court to hold off on hearing the case that would destroy preexisting conditions and kick tens of millions of people off their health insurance plans until after the election.

They still want it to be thrown out, that part of the law, but they don’t want it to happen till after the election. Republicans are literally in court right now fighting to strip you of your preexisting condition on Donald Trump’s orders. That, that’s what’s happening folks. The man is absolutely insane if he thinks people are going to believe this. Not only that, but let’s touch on the one thing that healthcare is better than it’s ever been. Really, for who? For the people who have to hop the border to go get their medication because they can’t afford it here in the United States? For the people who are struggling to pay these astronomical premiums and because their deductibles are so high, they literally still can’t afford to even go to the doctor? I don’t think it’s better for any of those people, to be honest, I don’t think it’s better for anybody in this country and we see that with the numbers, the stats, the facts, they back this up.

It is not better for anyone, in fact is getting worse and that is what Trump should be taking credit for. He and the Republican party. Yeah, I know the affordable care act did not go as far as it should have, but it helped tens of millions of people get health insurance coverage that otherwise would not have had it. So that is a positive. Destroying the affordable care act without replacing it with a Medicare For All program will cost millions of people their health insurance and that’s what the Republicans are trying to do. In the 2017 bill, I think it was the Republicans in the house passed, it did not include protections for people with preexisting conditions. So we know what kind of legislation we would get from Republicans if they get to write our healthcare laws here in the United States. They’re not going to protect your preexisting conditions like Donald Trump claims they do and Democrats don’t. They’re not going to make things more affordable. They’re not going to negotiate drug prices. They’re not going to get rid of all the costly overhead administrative costs that amount to about one third of our total spending on healthcare. They will do nothing other than make sure that Barack Obama’s name is no longer on that piece of legislation. Because at the end of the day, that’s what this is all about. Donald Trump is a crazy person trying to take credit once again for yet another accomplishment that is rightfully Barack Obama’s.