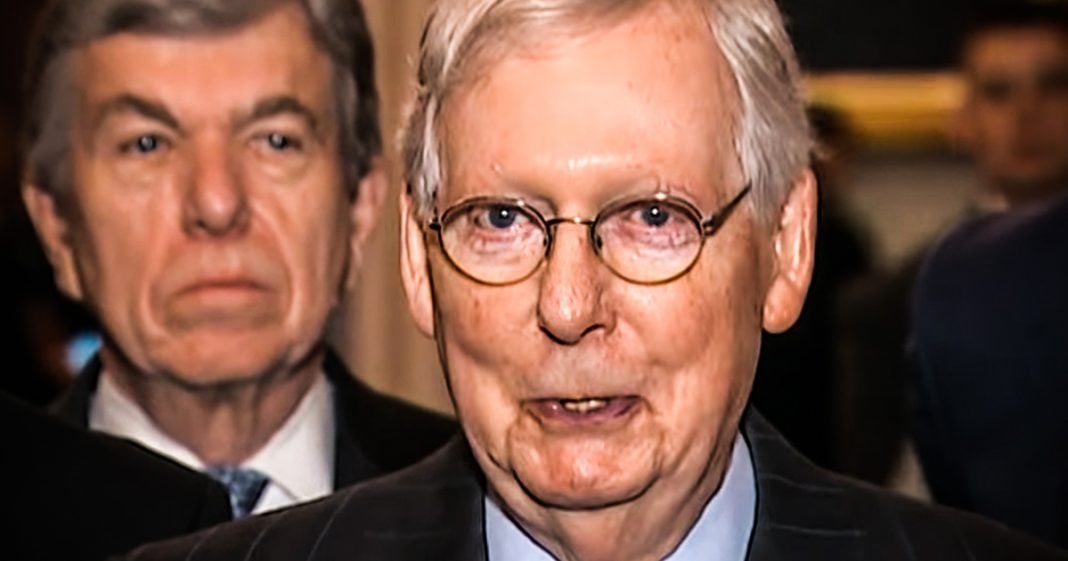 The advocacy group Public Citizen has filed a formal ethics complaint against Senate Majority Leader Mitch McConnell over statements that he has made recently about not being an impartial juror in the upcoming impeachment trial. By refusing to even act like he’s not going to vote to acquit Trump, McConnell has violated his oath of office, according to the complaint. Ring of Fire’s Farron Cousins explains what’s happening.

Yesterday, the advocacy group, Public Citizen, filed a formal ethics complaint against Senate Republican majority leader Mitch McConnell. In their complaint, Public Citizen explained that McConnell has repeatedly made it clear that he is not going to be an impartial juror in Donald Trump’s impeachment trial. In fact, McConnell has stated on the air that he is in fact working with the White House and that whatever the White House wants him to do with the impeachment trial is what he’s going to do. He is coordinating with them every step of the way, according to him, he is the one who told us this. This isn’t hearsay or conjecture. This isn’t a report based on an anonymous source. This is straight from the turtle’s mouth here. I am doing this, Mitch McConnell said, so Public Citizen said, yeah, that’s a violation of your oath of office by the way, so we’re filing this formal ethics complaint against you.

Now I fully 100% from the bottom of my heart support this ethics complaint because I do believe that Mitch McConnell and Lindsey Graham for that record, because Graham has done, said the same thing, they need to be punished in some form. Whether it’s, you know, just admonishing them, a little slap on the wrist. At this point, I don’t even care as long as it is some thing. If for some reason we manage to get this into the court system and we force these two morons and perhaps who else is out there to have to recuse themselves from the trial, then suddenly we’re looking at a very real possibility of Donald Trump going down. Slim, I mean, I’m talking like 1% maybe, but with McConnell gone with Lindsay Graham gone, then maybe things could happen. I mean, right now you do have Mitt Romney saying he’s going to vote against McConnell and vote to call witnesses because he thinks John Bolton is somebody we definitely need to hear from and he’s right about that.

But one guy ain’t going to do it. Collins and Murkowski have to flip too, and they’re really not acting like they’re going to. Oh sure, they’ve, you know, been a little disappointed in Mitch McConnell’s actions, but they’re not going to vote against him. And even if you only get one of them, and suddenly there’s a tie in the Senate well you got to call on the tiebreaker, and that’s Mike Pence. Pence isn’t going to vote to call witnesses. And then we move on with this sham trial. So yeah, I think the best we can hope for this is that Public Citizen’s complaint ends with something, because as it stands right now, this impeachment trial is not going to do that. It’s not going to give anybody left of center the results that they’re wanting. But this complaint, this has the opportunity not just to punish Mitch McConnell, but to remind the public of what a disgusting, spineless little weasel McConnell truly is.