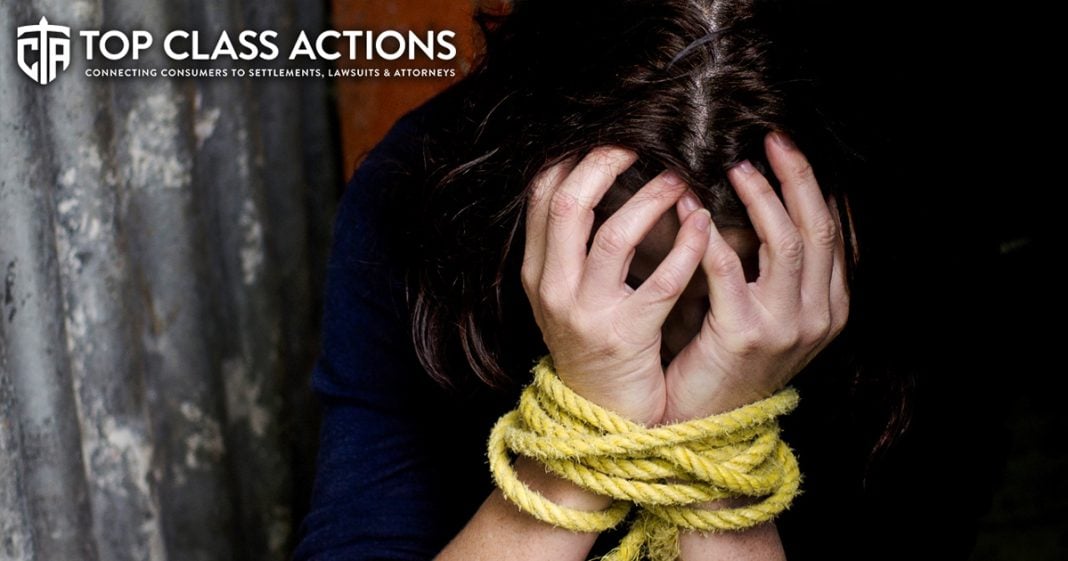 Sex trafficking, particularly of young, vulnerable persons is a global epidemic, representing the largest, most extensive criminal enterprise in the world. In the United States alone, forced prostitution generates hundreds of millions of dollars for the perpetrators and businesses.  Yet, businesses have escaped liability, until now. Ring of Fire’s Farron Cousins discusses this with Scott Hardy, the President of Top Class Actions.

Scott Hardy:                          Sure. So now we’re seeing the human trafficking lawsuits actually target a lot of the hotel industry and the entertainment industry because that’s where, typically these women, are being trafficked. And what we’re seeing are just horrifying reports from all over the country of different employees who knew this was happening from, front desk employees to management to, you know, of course the housekeepers who are cleaning the rooms, who are aware and think or suspect that some of these young women are being trafficked through their hotel. And that there have been massive cover-ups and lack of reporting at these large and very successful different corporate chains because of course they’re, they’re profiting from these hotel rooms being taken up.

And, you know, we don’t want to disparage any of these large hotel brands. They, they’ve tried to battle us in the past, but this is a very intense and, and it’s a problem that doesn’t go away and that they’re just really struggled with. But now, as you said, trial lawyers are actually going after these corporations trying to get some justice for the victims who have been ignored while they’ve been suffering, just terrible torture, under these human traffickers.

Farron Cousins:                  Right, and we haven’t seen a whole lot of, I guess you, headway from any kind of, you know, national law enforcement agencies, from the FBI. Sure, they’ve, they’ve done great things on this issue, but unfortunately it’s not enough because you, you track down one human trafficker, another one pops up somewhere else. You’ve got local law enforcement agencies across the country that do not have the resources or the training to be able to address this crisis. And a lot of people think, well oh, human trafficking, it’s probably happening down at the Southern border. Okay, well not really. Oh well it’s only a big city issue. Okay. But not really. And that’s why there’s so many, so many problems with it, with addressing it through the law enforcement aspect is it’s not happening where the FBI has their headquarters and where they’re training agents.

This is happening, a lot of times, in rural America. You know, where you have a small local police department and they don’t know how to address this. They’ve never been trained. They don’t even know, they don’t even know what to look for. So that’s why in instances like this, we do have to turn to the trial lawyers because they, they know what to look for. They know who to go after. It may not be the actual people smuggling human beings, but it’s the people who are turning away when they see these warning signs.

Scott Hardy:                          Exactly, and that’s what we’re really focused on in these lawsuits are, it’s targeting these businesses, making sure that they’re paying up and paying it to these victims. And that’s going to be the way to continue to shut this down is that when you have these businesses that are turning a blind eye to these human traffickers, you have to make them pay. You’ve got to hit their pocketbook to change that behavior. And that way it becomes standard, commonplace. If anybody is working that front desk, if a housekeeper sees something that’s untoward, they report it, they can report it anonymously and they can make sure that these folks are, are taken care of and not just ignored as these corporations pocket these profits.

Farron Cousins:                  And so one of the things that has to happen too is not just with the lawsuits, but there has to be a better method of training. You know, the person at the front desk, whether it’s a, you know, locally owned hotel or a massive chain that’s all over the world, they have to know what to look for. You know, the, the housekeeping staff has to know. They have to be able to recognize the signs, right? I mean that, that, that’s a huge part of it too.

Scott Hardy:                          Exactly, they’ve gotta be able to recognize it. I was just at a hotel last week for a conference and I saw a couple of signs talking about human trafficking. So it’s good that the larger corporations, this was a Weston, is they’re actually, you know, working on training their employees or trying to educate customers because, you know, those of us who spend a lot of time in hotels, we’re walking up and down the hallways. If we see something, we need to report it. So it really is an everybody has to be looped in and cognizant of this effort if we’re going to have a positive impact and, and help these young women.

Farron Cousins:                  Absolutely. For more information on this issue, you can follow the link in the description of this video, head on over to Top Class Actions and make sure you sign up for their weekly newsletter. Scott Hardy with Top Class Actions, always a pleasure talking to you.