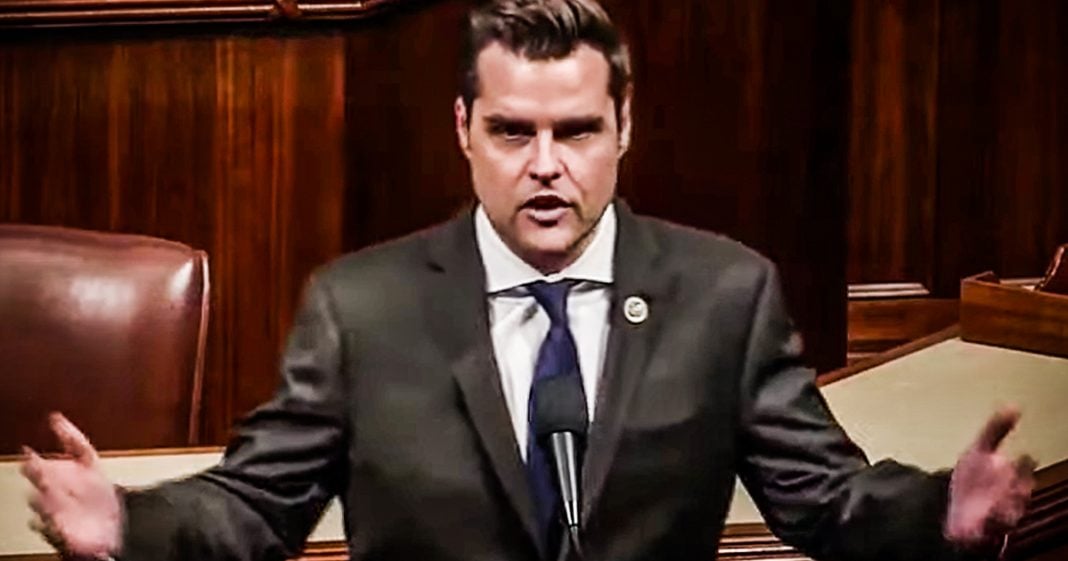 Republican Congressman Matt Gaetz has always been a loyal Trumper, but after he voted last week to limit the President’s war powers, the White House grew angry and they are no longer on speaking terms with Gaetz. Gaetz made the right decision, and his reason for doing so was sound, but that doesn’t matter to the Trump White House. Ring of Fire’s Farron Cousins discusses this.

Matt Gaetz, one of Donald Trump’s formerly favorite members of the Republican caucus in the US house of representatives has now been essentially blacklisted by the White House after he voted with the Democrats last week to limit Donald Trump’s authority on using the military against Iran. Here’s what happened, before they took a vote last week on that resolution, Matt Gaetz sent an email out to all of his fellow Republicans saying, hey, I love Trump. You know, I, I brag about being his favorite Congressman, all this stuff, yada, yada, yada. I love him. He’s great guy. Um, we got to do this though because this is a dangerous situation and as Republicans, aren’t we, you know, all about constitutional power and literally says in the constitution that Congress would have to declare this. So, so how can the rest of you not support this, basically? He also said, you know, we, we also have to consider sometimes, you know, constitution over loyalty to the president.

Well, obviously Donald Trump wasn’t happy about this, and according to reports, Donald Trump was fuming in the White House when they learned that Matt Gaetz had sent this email out to Republicans even before he voted with the Democrats. So then the vote goes, Matt Gaetz votes with the Democrats. You know, he gives a great speech about it, which is accurate, believe it or not. He talked about the fact that his district right here where I am, we have three massive military bases here. Matt Gaetz does represent thousands of current and former members of the US military. He, he, he kind of does have a feel for that. He understands the, these folks don’t necessarily support military aggression at the whim of just a president. So kudos to Matt Gaetz for finally getting something right. But that doesn’t matter to Donald Trump. And as I mentioned, they’ve essentially blacklisted him, at least for the moment.

It’s not just because Trump is angry, it’s because reports say they won’t take his phone calls anymore. They’re not talking to him anymore. They’re not communicating with him in any way. Matt Gaetz has been shut off, at least for the time being from his best friend Donald Trump. But this also goes to show you just how thin skin Donald Trump was. Matt Gaetz even got on the floor of Congress and said, listen, this piece of legislation here, that all it does, by the way, is essentially reaffirm what’s already in law. It just says, the president cannot use any further military force in the country of Iran unless Congress approves it. And that’s already the law. Matt Gaetz got on that floor of Congress and he said, listen, there is nothing in this piece of legislation that critiques Trump. There is nothing that calls him out. There’s nothing that even condemns the strike that killed Qasem Soleimani, nothing.

Okay? This is just about reaffirming Congress’s power under the constitution. He made it crystal clear that he still loves Donald Trump, and that this legislation had nothing to do with that brotherly love that they share, but that wasn’t good enough for Donald Trump. So it’s going to be interesting to see how this plays out in the coming weeks and months. Is Donald Trump going to embrace Matt Gaetz once again? Or is Matt Gaetz going to have to return to his exceptionally red district down here while running for reelection and realize that all of these little Trump supporters down here suddenly don’t like him because one time he voted against Donald Trump? That’s going to be very interesting to see as Gaetz reelection campaign ramps up.