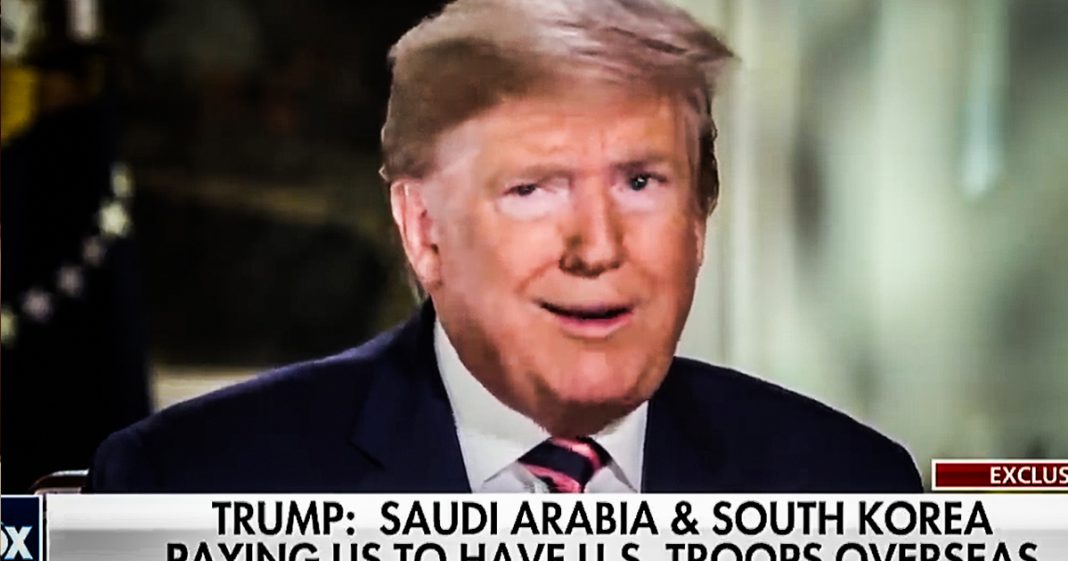 In a recent interview, Donald Trump claimed that he has told other countries that if they want US troops within their borders, they have to start paying us. This immediately prompted backlash from critics claiming that the President is using our soldiers as his own private mercenaries, which apparently isn’t that far from reality. Ring of Fire’s Farron Cousins explains what’s happening.

On Friday, Fox news aired a very weird, I guess you would call it, interview between Donald Trump and Fox news host Laura Ingraham, where Trump appeared to have admitted that he is actually selling US troops to other countries. Here it is:

So immediately after this clip went public and everybody heard Donald Trump say what he says to other countries, oh, you want some of our troops? You got to give me a little bit of money, right? Yeah. Put some money in my back pocket here and then I’m going to send some troops over there to protect you. Now, if that kind of sounds familiar, it’s because it should because that is essentially how the mafia used to work, right? You want protection for your little shop. Well, the shop owners got to give us a little bit of money, right? Just leave it in an envelope there by the door. We’ll pick it up and then we’ll make sure that nothing bad happens to you, but if you don’t give us our money, then we can pretty much guarantee you that something bad is going to happen to you.

Now, one of the bigger questions that arose from this little clip that’s now going viral is where’s the money going? Right? Is it actually money that’s going to Donald Trump? Is it money that’s going to the federal government or is it some kind of backhanded deal? Is it more Donald Trump saying, hey, Saudi Arabia, you want some of our troops? I’ve got all these condos that need to be sold. Maybe, maybe that’s what Trump means. Honestly, we don’t know at this point, but we do know that Saudi Arabia, as Trump himself has said they buy lots of condos from him. They buy lots of real estate from this guy, so therefore he loves them and he’s willing to sell out literally our military to have them go over and do whatever Saudi Arabia needs them to do, to fight and die for a different country just because Donald Trump or whoever it is, gets a little extra cash in their pocket.

That is not what any member of the US military signed up for. They signed up for the military because they wanted to protect and serve the United States. That’s what they wanted to do. But it’s all about the United States. Right? They didn’t ever think for a second that they were going to be sold to another country, that they were going to have to act as private mercenaries for some country they’ve never stepped foot in, but that is exactly what Donald Trump is doing here. Now again, immediately after this clip went viral, you had lots of people come out, actually some Republicans and former Republicans too, attacking the president for essentially turning the United States military into his private mercenary army for hire. Give us the money. We’ll give you the troops. Those are mercenaries. You, you sell them to the highest bidder, and that is what Donald Trump admitted to in that clip with Laura Ingraham.

That’s what’s happening right now with our military. So any of you hardcore Republicans out there, you know you’ve got your little I support the troops stickers on the back of your pickup truck, I want you to take note of this story. Donald Trump, the Republicans in general, they do not care about US troops. Trump has said repeatedly that these men and women in our military, they’re just killing machines. That’s all they are. They’re not human. They’re killing machines and now he’s out there selling them to any country willing to pay Trump’s price. That’s not supporting the troops, that’s turning our military into Trump’s private army for hire.