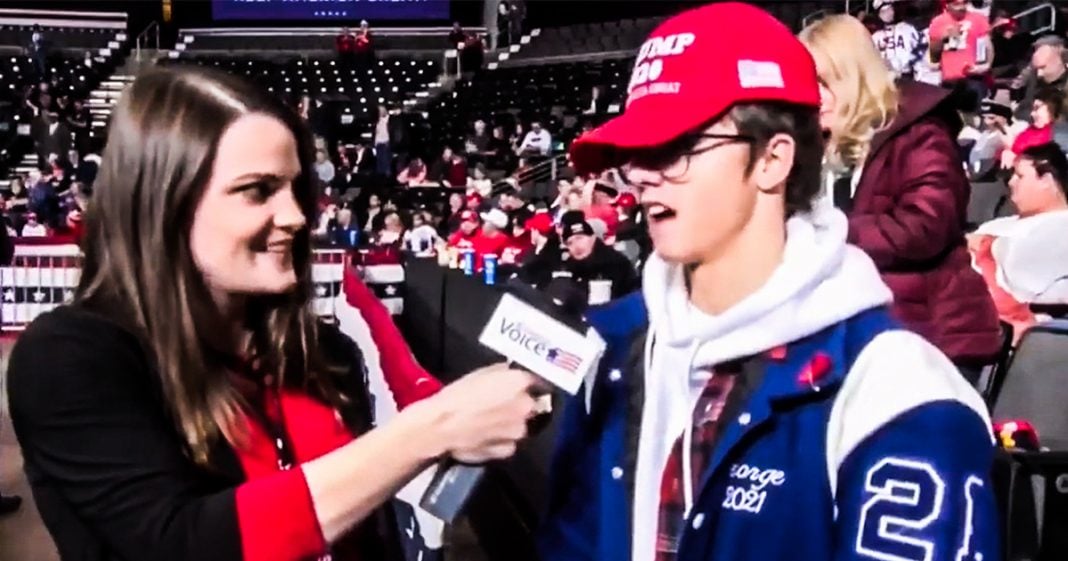 At Donald Trump’s rally in Ohio this week, a reporter asked a young Trump supporter to name just one single item that Trump has done well. The young man sat there for a moment, thought as hard as he could, then admitted that he couldn’t name a single thing and that he just supports him. This is a cult. Ring of Fire’s Farron Cousins discusses this.

On Thursday, Donald Trump held a rally in Ohio and a reporter was able to find a very young Trump supporter and just ask a very simple question, what has the president done that you think he’s done well? And this young Trump supporters response is absolutely shocking. Here it is:

Okay. This is just a little note for anybody out there. I don’t care who you support, what candidate it is, what office they’re running for. But if somebody asks you with a camera rolling in your face what this candidate or politician has done that you like, don’t just sit there and be like, oh, blah, blah, blah. I don’t know, I just like them because that’s not an answer. You can’t just like somebody, you can’t just support somebody just for the heck of it. You gotta have a reason. Otherwise, you’re a cult. And I’m pretty sure we all know that the Trump supporters like that kid there, those, they’re a cult and he just kind of further proved that by saying I, I can’t name a single good thing he has done. Not even one. I just support him.

I just support him. But what’s really funny about this to me is this is what I’ve been saying for so long and this is what I have been telling our viewers to do when they encounter these Trump supporters. What has he done that you like? What has he done that’s actually benefited you because you didn’t, average workaday Trump supporter, get any part of that tax cut. None of it. Your jobs are not being threatened by illegal immigrants coming over the border. They’re simply not. That’s a myth. You’re not benefiting from the trade war, I’ll tell you that much. You’re actually paying more. Your healthcare costs continue to go up. Jobs are still being shipped overseas. Job growth, we just got the job numbers on Friday, 145,000, that’s low and they’ve been dropping every month.

Job growth is getting worse. You’re not better off than you were four years ago. So what has Trump done that’s good for you? And that’s the question we need to be asking to Trump supporters. And I guarantee you if you were to walk up to one of them in a civil manner, you know, much like this reporter did, and you ask them that same question, point blank. Every single one of them is going to give you the same response that that MAGA hat wearing child gave to that reporter.