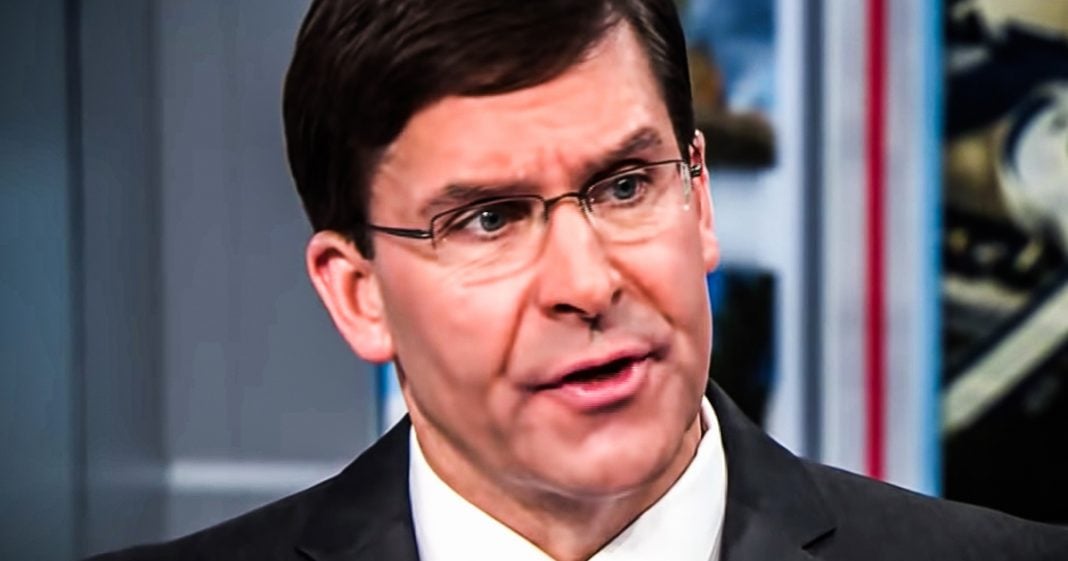 According to Secretary of Defense Mark Esper, there isn’t actually any intelligence showing that Iran was preparing to attack US sites, as Trump claimed last week. Instead, Esper says that they all had a feeling that Iran was going to be doing something like that, but again, there is literally no intelligence to back it up. This is Iraq all over again, as Ring of Fire’s Farron Cousins explains.

On Sunday, secretary of defense, Mark Esper, appeared on CBS’ Face The Nation where he was asked point blank about Donald Trump’s claims earlier in the week that Qassim Suleimani, the Iranian, Iranian general that the United States killed the week before, he was asked about Trump’s claims whether or not Suleimani had in fact planned attacks on foreign US embassies, which Donald Trump had said last week. And if so, is there intelligence to back it up? And defense secretary Esper said, no, there is no intelligence. I haven’t seen any intelligence that says anything like that, Mr. Esper told CBS’ Face The Nation, and I don’t think the president has either, he went on to say. But, but before you think for a second that that is Esper admitting that Donald Trump lied about the intelligence, which he did, Esper then went on to say, but, you know, we’re pretty sure. We’re pretty sure that Suleimani was totally going to strike something. You know, maybe, maybe it was US embassies, maybe it was just , you know, sites with a lot of Americans overseas. Hell, maybe he was even going to attack us here in the United States. We don’t really know because there is no intelligence, Esper told the world, but he does support Donald Trump’s decision to take out Suleimani and he does support Donald Trump’s claims that he was going to attack some kind of US outpost.

even though he had already admitted that there was no intelligence to back any of this up. Esper right there in that one single interview proved that he cannot serve as our secretary of defense. He admitted there is no intelligence, then he said, I don’t care that there’s no intelligence. I’m going to make this claim anyway and I’m going to back up the president for making this claim, which we all know is a lie, including Esper himself, but he’s going to do it anyway. He’s going to back it up. Esper has access to the intelligence. There is nothing that is withheld from this guy. He is the secretary of defense. If there is a piece of intelligence anywhere that our government has control over, has in their hands, has on their computers that says the United States or any of our outposts around the world are going to be attacked, Esper has seen it.

So we have to believe that when he says, I’ve never seen this intelligence, that it simply doesn’t exist. Esper’s not some lower level guy. He’s in charge of the Pentagon, he knows all of the intelligence, all of the information. If it exists, it runs through Esper to the president of the United States. So if Esper didn’t see it, then there is a 0% possibility that Donald Trump saw intelligence that said that, yeah, four US embassies were absolutely going to be attacked. It was a lie folks, much like we saw on the run up to the Iraq war, Donald Trump did the exact same thing to us last week. And so for right now, sure tensions are a little bit on hold. Things seem to have calmed down a little bit. The public is against Donald Trump, 56% say he handled the whole Iran situation poorly. So we’ll see. Maybe this is over, maybe there will not be further escalation or maybe in the near future, Donald Trump’s going to need another distraction. And that may be the point when a couple more drones and missiles find their way from the United States back over to Iran. And you can guarantee one thing, though, there will be no intelligence whatsoever to back up any claims that this administration makes about Iran.