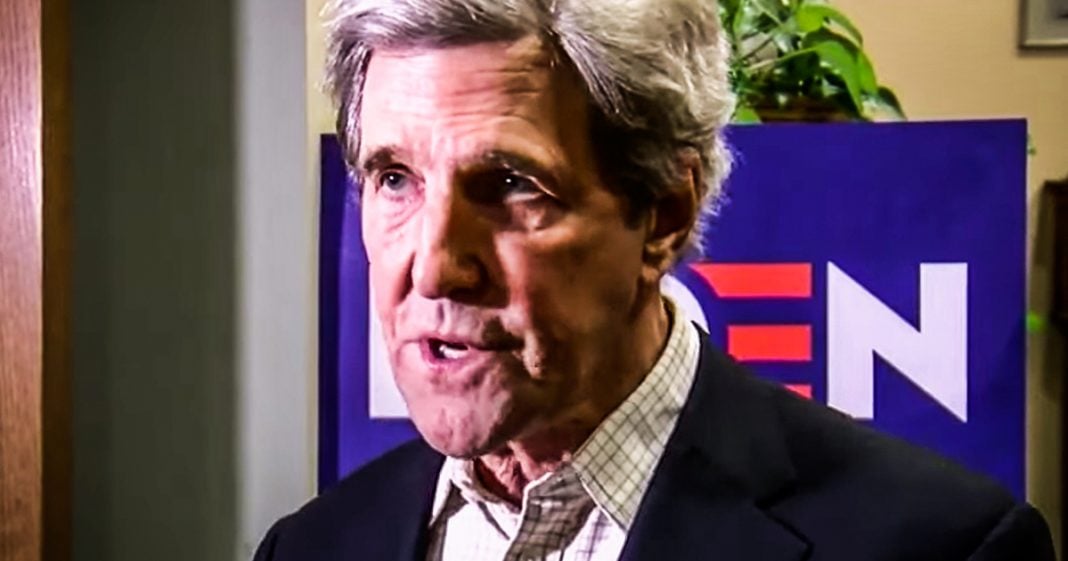 Former Secretary of State John Kerry has decided to join Joe Biden on the campaign trail after his endorsement, but his help actually just appears to be making things worse. Kerry tried to defend Biden from the growing attacks on his vote in favor of the Iraq War by claiming that Biden isn’t a bad guy, he was just duped by Republicans who “didn’t keep their word.” So Biden has terrible judgement and shouldn’t be trusted with big decisions? Ring of Fire’s Farron Cousins discusses this.

Recently, former vice president Joe Biden, has been basically receiving a lot of flack, right, for his vote in favor of the Iraq war. You know, all those many years ago, 18 years later, that vote is still coming back to haunt him most importantly, because Biden still refuses to own up to the fact that he made a big mistake and he shouldn’t have voted for it anyway. He’s already lied to us about, with his claim that, oh yeah, I voted for it. Then, I like totally immediately knew it was a bad idea and I wish I could have taken it back, ah. That’s a lie. He’s not being sincere about this. So he tried to pull out somebody who might be a little bit more sincere than Biden is and that somebody is recently, endorsed I guess, Joe Biden’s campaign, John Kerry. Former secretary of state, failed democratic presidential candidate running against at the time, the most unpopular president in American history and he still couldn’t manage to win that election.

But anyway, John Kerry came out, endorsed Joe Biden. Then he hit the road this past weekend acting as a Joe Biden surrogate. You know on this, we know Joe tour. So he’s going out there trying to sell Joe Biden to the public as somebody who knows Joe Biden, and this is what John Kerry had to say this past Friday about Joe Biden’s vote in favor of the Iraq war. The fact is that we were promised by a president, by an administration that they were going to do it as a last resort after exhausting diplomacy, that if they have to go to war or be with a coalition that they built broadly and that they would do it only in conjunction with our allies. It didn’t have to happen. It was a war of choice, John Kerry tells us, it was a mistake to have trusted them, I guess, and we paid a high price for it, but that was not voting for the war.

John Kerry tells us, that wasn’t a vote for the war. So then what was it, John? That was a vote for the lies, a vote for being duped, a vote for bad judgment. You think you’re out there helping Joe Biden by just telling people, hey, listen, the guy got conned. I mean, he got totally scammed on this, right? That’s not his fault. He’s just a crazy old man who was a little less crazier and a little less old back then. Yeah, you’re literally making things worse for him, John Kerry. Not to mention the fact that, oh, you were duped. Oh, they, they pulled a fast one on ya when they said, we’re going to friggin Iraq instead of going after the people who just attacked our country on 9/11? That wasn’t your first warning sign, John and Joe, and all of you other Democrats who voted for the war.

Really, that wasn’t a big red flag for you? Because we had plenty of senators who had enough good sense to know that hey, this administration’s lying to, we shouldn’t give them this power. One of those people was Bernie Sanders. He saw through the BS. So why couldn’t you John Kerry, why couldn’t you Joe Biden? Because you didn’t want to. That’s why. So you can go out there and try to sell this to the American public any way you choose. You can continue lying to them, which is exactly what you did. Like, oh, well, this isn’t technically a vote for the war, bull. You keep pulling that crap with the American public and you see how far that gets you in this primary because not only is it disgusting that you’re still trying to whitewash these votes for the Iraq war, but it’s also insulting to every person in this country.