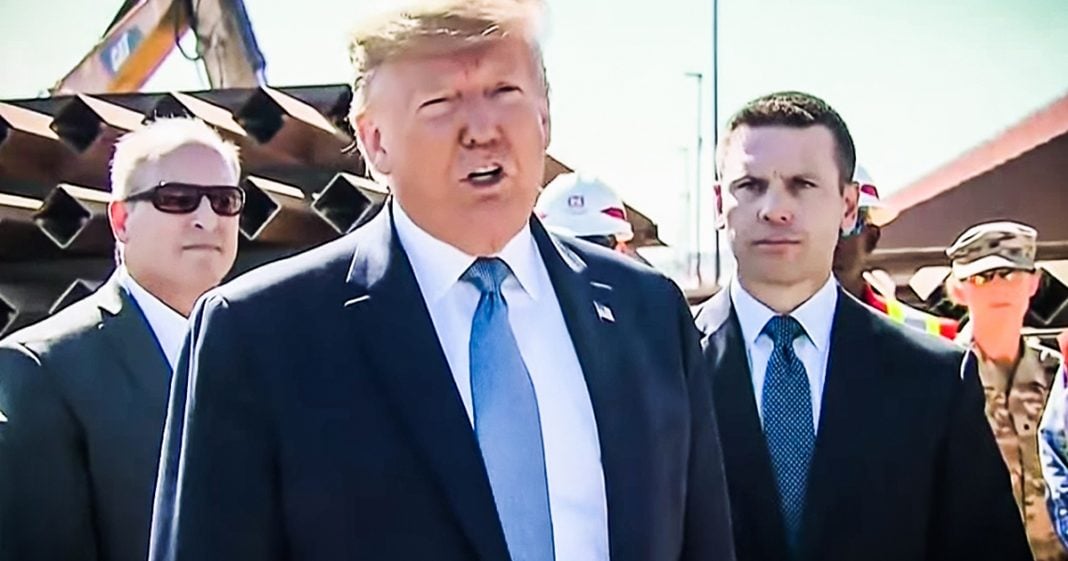 A U.S. Court of Appeals this week handed Donald Trump a rare, but powerful, win after they ruled that he can start moving money away from the military and put it towards his border wall. The laws of this country are very clear about the use of military funds, and this court ruling was absolutely the result of partisan judges trying to hand the President a victory. Ring of Fire’s Farron Cousins discusses this.

In a horrible ruling earlier this week, the US court of appeals in New Orleans voted two to one to allow Donald Trump to steal money from the US military in order to fund his border wall. This could be as little as $2.1 million, billion dollars, excuse me, or it could be as much as a little over $6 billion that the two judges on this panel said, sure, Mr. Trump, you can go steal money from these military projects and use them to fund you’re completely useless and not needed border wall. So the two judges out of the three judge panel who voted to say yes, Trump, you can have this, one of them not surprising was a Trump appointee. The other was a Ronald Reagan appointee and I want to hit on that point just a little bit here. A Reagan appointee from the 19 friggin 80s is still sitting and serving on a court in the United States and clearly basing their rulings on their party affiliation because the law US law is very clear about the was what the president can and cannot do with military funds, once Congress has voted on them.

If he wants to change the allocation for what military funds have already been allocated for by Congress, when they vote on it, he has to get congressional approval and if Congress does not approve, he cannot divert that money. If he declares a state of emergency, which he has, then he is free to use a little bit of that money, but he must also tell Congress what it is for and since it’s from the military, the military has to be the one to do the actual project and none of those things are happening. He’s hiring private contractors. People who’ve donated to his campaign are getting rich off this, so he’s clearly not following the very clear rules set forth in US code. And the two Republican judges on this panel, one of whom has been sitting there since the 1980s just said, sure, go ahead.

We don’t care. We’re Republicans and Republicans stick together and that’s all we base our rulings on. But back to the idiot sitting on that court since the 1980s let me hit on that for just a moment because that absolutely pisses me off. This is why we need term limits. There is nobody in this country who was appointed in the 1980s who should still be serving on a court today. They shouldn’t have been serving on a court 10 years ago, and to be honest, they shouldn’t have even been sitting on a court 10 years after that. We have got to put judicial term limits in place, now. The next president of the United States has to make that a priority because there is no way in hell that somebody who’s been sitting on a bench since the 1980s still has the same kind of mental clarity that they had when they were first appointed.

There is no way that they have the same acute legal mind that they had when they were appointed. People’s cognitive abilities, once they hit a certain age, begin to decline, that’s science. That’s not an attack on whoever this judge is. I’m not going to name them, but it’s not an attack on them. That’s basic human biology. This person should not be there, and their partisanship with this particular ruling just goes to prove that even further. So now, Donald Trump, the administration already issued a response, a statement to the world declaring a victory here saying, here we go, folks. Buckle up. We’re about to build this unnecessary and useless wall because this court with a Trump appointee and a Reagan appointee says that we can ignore the established laws of the United States and steal money from the military.