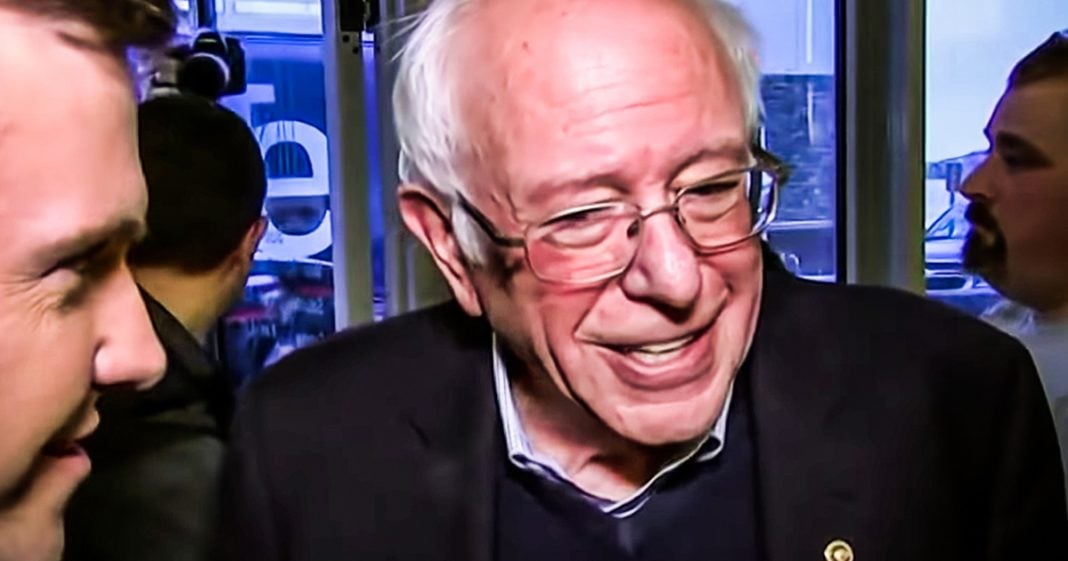 Bernie Sanders can win the 2020 election, and that isn’t a pleasant thought for those who are happy with things the way they are. That includes Donald Trump, the corporate media, and establishment Democrats – all of whom have been relentlessly attacking Sanders and his campaign. As Bernie continues to rise in the polls, we can expect even more of these bad-faith arguments from all sides, as Ring of Fire’s Farron Cousins explains.

You know, I don’t think that Donald Trump thought even for a second that he was going to have to face Bernie Sanders in the 2020 presidential election. But as the polls are now showing us, that is a very real and very likely possibility for Donald Trump. And so since they’ve seen all the latest polling showing that Bernie Sanders has now pulled ahead in Iowa and New Hampshire and a lot of the other early primary and caucus States, and considering the fact that Bernie Sanders is the only person running for president right now who soundly beats Donald Trump in national polls in a head to head match up, the Trump administration or Trump campaign, excuse me, has decided that they’re finally gonna go ahead and start attacking Bernie Sanders. They spent several days last week, including over the weekend with Trump himself, going after him on Twitter. Right? The Trump 2020 campaign sent out this huge tweet thread trying to go after Bernie Sanders.

You know, saying things like the word socialism and socialist and Venezuela, and that’s about the extent of the content of those. They think that is somehow going to convince people that Bernie Sanders is a horrible human being. And then Donald Trump on Sunday, ominously tweeted the following, he said, wow, crazy Bernie Sanders is surging in the polls looking very good against his opponents in the do nothing party. So what does this all mean? Stay tuned. Now it was later pointed out that James O’Keeffe, right, the guy from Project Veritas who lies about everything he can possibly lie about, is teasing some kind of damaging, horrible information that he’s going to release about Bernie Sanders in the very near future. So obviously somebody connected to Donald Trump found out about James O’Keeffe’s new little project, and that’s what Trump was hinting at in that tweet about Bernie Sanders. Now here’s the big problem with this.

But those aren’t even the two worst groups, right? Corporate media sucks and most people already agree with that left, right and center, everybody hates the media and not for the reason that Trump hates it either. They, they, the public hates it for legit reasons. So we don’t buy into their crap most of the time, most of the time. Majority of people hate Trump, right? So who’s worried about his stupid attacks, calling him crazy Bernie and talking about socialism and oh my God, he flew on a plane and he’s supposed to be for doing something about climate change. Oh, what a hypocrite. Ha ha ha. Yeah, those arguments don’t fly with people with normally functioning brains. But there is one remaining group that’s launching huge attacks against Bernie Sanders right now that actually could stick and those people unfortunately are the democratic establishment. You have former Hillary Clinton aides right now in a article posted on the Hill, I believe it was this morning.

Perhaps it was yesterday, but either way, this article, you have former Clinton aides out there literally lying about Bernie Sanders. Out there saying that, oh Bernie didn’t do much of anything for Hillary except for, you know, those 39 rallies in 13 different States. He was all over the place doing stuff for Hillary Clinton. And then they lied in that same article saying that, you know, it was ridiculous because Hillary supporters went all in for Obama after she lost that nomination. Much more so than Bernie supporters did for Hillary in 2016, which is a flat out lie that you can easily disprove with statistics, but the Hill didn’t bother to do that in their article, no. 25% of Hillary supporters in 2008 did not go on to vote for Barack Obama in the 2008 general election. Only 13% of Bernie supporters in 2016 didn’t go on to support Hillary. Those are numbers that you can verify for yourself.

It’s very easy to look those up. It’s shocking to me, but not surprising really, I guess, that the Hill didn’t bother to do this and it’s infuriating that Hillary Clinton’s former staffers are still out there perpetuating these lies because they have some kind of grudge against Bernie Sanders that has no basis in reality. Bernie’s people came through for Hillary Clinton in 2016. Bernie himself came through spectacularly for Hillary Clinton in 2016 anyone who says otherwise is lying and is clearly too stupid or too dishonest to be able to talk about politics in a reasonable fashion. That’s the truth. Bernie Sanders is getting it from every single front right now, and you know what’s happening because of it, his poll numbers keep going up. Bring it on folks. Bernie’s not going away. Bernie’s not going to fall to your ridiculous lies and smears, including the one that emerged this weekend about, oh no, they’re telling people to go out there and attack Elizabeth Warren by pointing out her policies. Oh wow. Good luck selling that one to the public, folks, because yeah, you’ve got a lot of irrational Bernie haters out there right now, but Bernie’s staying above it and his poll numbers are rising. Why? Because he’s not doing all these horribly stupid things that all his haters are accusing him of doing. He’s actually out there talking policy, and as it turns out, the American public really likes candidates who talk about ideas and not their opponents.