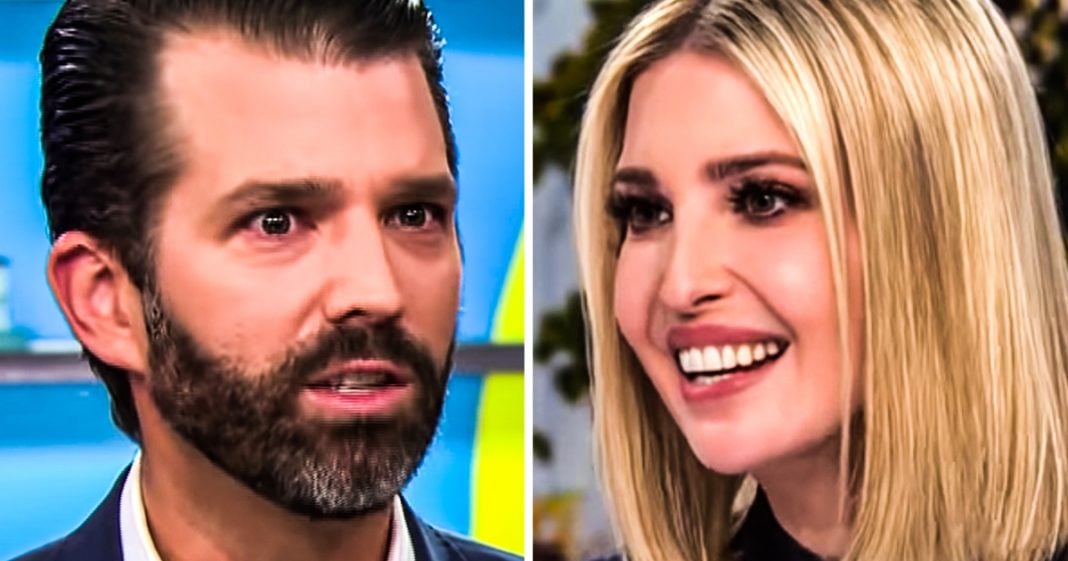 Republicans are already looking ahead to 2024, and they have decided that they either want Donald Trump, Jr. or Ivanka Trump to be the nominee in 4 years. Not only does this show that there is no intelligence left in the GOP, but it also shows just how far the Party has sunk to truly become the Party of Trump. Ring of Fire’s Farron Cousins discusses this.

You know, we have said repeatedly over the years, that Donald Trump is not the cause of all of the problems we see today with the modern Republican party. He is merely a symptom of it and we still stand by that. That is still an accurate statement, but it’s time to amend that just a little bit because yeah, Trump may be a symptom, but that symptom has now taken over the entire disease, which is the GOP. According to a new report by Axios, two of the top favored candidates among Republican voters for 2024 happen to be Donald Trump Jr and Ivanka Trump. Axios is reporting on this new poll from survey monkey that says that there’s four front runners right now, I guess for the GOP nomination in 2024. 40% of respondents chose vice president Mike Pence. 26% chose Donald Trump Jr, 26% of people polled said, yeah, you know what, I would like Donald Trump Jr to be the Republican nominee in 2024.

Oh, I’m sorry it was 29% said Don Jr, 26% said Nikki Haley, and then 19% said Ivanka. Now here’s the thing, I understand the Republican appeal towards Donald Trump Jr. He’s just like his father. He’s charismatic, he’s crazy, he’s stupid, but he knows how to manipulate people, so I get that. I don’t agree with it, but I get it. But Ivanka, what? A fifth of respondents in this said, yes, Ivanka should be the nominee. What has Ivanka done? What kind of charisma has she even shown that would make people say, you know what, I think she’d be a good president? I think yeah, mhmm. Ivanka has been absolutely worthless in this administration. She has been mocked relentlessly by other members of this administration. Her husband, by the way, Jared Kushner still under multiple different criminal investigations. Ivanka is absolutely poison. Now, that’s not to say that Don Jr is not also poison because as I mentioned, he’s got a lot of the traits that his father has.

He can manipulate people. He can work a room. But, whereas Donald still has some people convinced that he is some kind of self made man, Don Jr can’t con people into thinking that. Don Jr has been a failure. I mean, ever since his dad became president, and he took over the business, they have been hemorrhaging money left and right. Hell, they forgot to pay their taxes in the city of Chicago last year under Don Jr’s leadership. So yeah, I think Don Jr would have a tough road ahead. I do think he would stand a good chance of actually winning, but I think Ivanka, you put her out there on a debate stage against literally anyone, even if it’s somebody on her side and you’re going to see just how dull witted that woman truly is.