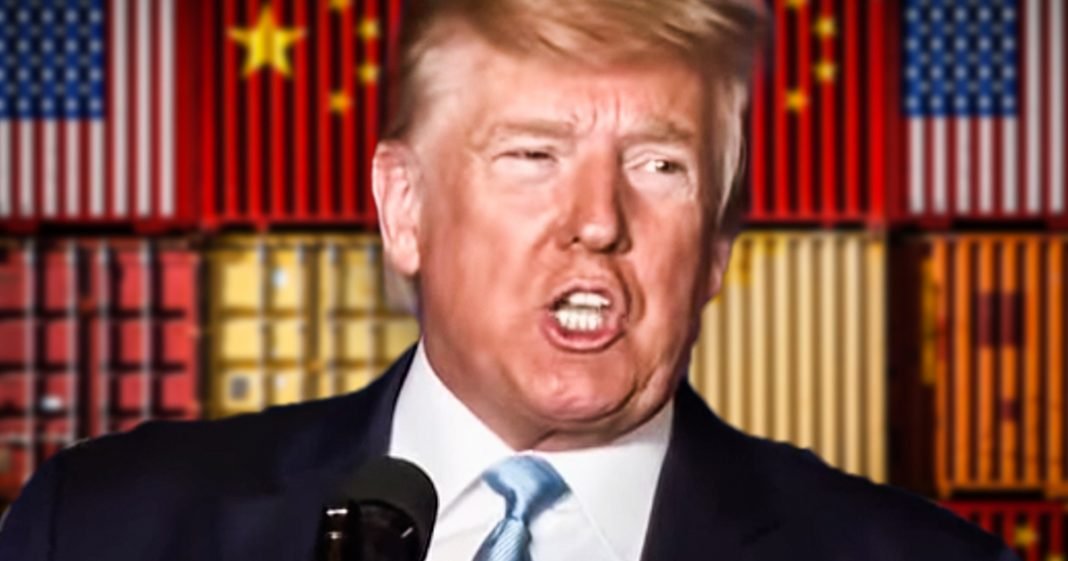 A new analysis by Yahoo Finance has confirmed what we have been telling people from the start of Trump’s trade war: The tariffs that he has put in place have been 100% paid by US consumers. This new analysis should become a talking point for every person running for office in 2020, pointing out how much Trump’s policies have hurt regular Americans. Ring of Fire’s Farron Cousins discusses this.

Throughout most of 2019 and between weird tweets attacking the city of Baltimore, attacking members of the media, Donald Trump would occasionally tweet out something or mention during a speech or a rally that China was paying all those tariffs he was putting in place and man, they were hitting China hard. China was struggling. China was barely staying afloat according to what Donald Trump said throughout all of 2019. Well, according to multiple different reports out in the past two weeks, including the most recent one, an analysis by Yahoo finance, it turns out that those tariffs were not in fact being paid by China. As we have said from day one of this trade war, 100% of those tariffs ended up being paid by American consumers. That is what all of the recent reports have shown. Not just most of the tariffs were paid by American consumers. Not three quarters, not 99%, 100%. Every penny of Donald Trump’s trade war has been paid by American consumers. Oh, and get this, those reports also told us something else. They also looked at what has happened to China because of the trade war. And do you know what’s happened to them because of the trade war, according to all of these new reports? Nothing, nothing, nothing has changed.

Nothing. They’re not paying more. They’re not paying less. They’re still paying the same amount they were. They’re still making the same amount they were. They’re not struggling anymore because of these tariffs. They’re not struggling any less because of these tariffs. Things are exactly as they were before the trade war. Meanwhile, those of us here in the United States we’re paying upwards of $40 billion per month on goods because of Donald Trump’s trade wars. And yet this idiot has the audacity to go out there repeatedly and lie to us saying, China is paying these and you are not because he thinks we’re stupid. And that’s the problem with stupid people is stupid people always think everybody else is dumber than them. And that’s why Trump makes those lies. That’s why he makes those outrageous claims because he thinks we’re dumber than he is, but we’re not. And the economists who have run these studies and looked at all the numbers are not dumber than he is either. In fact, they’re much, much smarter.

But these are the kinds of stories that democratic candidates, whether you’re running for president or dog catcher, this is what you need to be talking about. The fact that these tariffs are 100% paid by American citizens, that it’s costing us close to $40 billion per month and it’s hurting us. This is what we talk about. You’re not going to beat Donald Trump by trying to say he’s just a mean bad guy. You’re not even going to beat him on the Iran issue, by the way. What you’re going to beat him on is go out there, go to Wisconsin, go to Iowa. You’re there all the time anyway as if the place matters. Sorry, Iowa, but come on. Go to the Midwest, come to the South even and tell people face to face the stories that we have been saying for the last year and a half about the trade war. Bring these studies with you. Hell bring hundreds of copies and hand them out to people and just say, you want to know how bad Trump’s policies have been for you? Look at this piece of paper. Look at this, read this. Everything is in there, and everything in there is accurate and tell the stories and tell them that you’re going to end this and tell them that you’re going to do better. That is how you win an election.