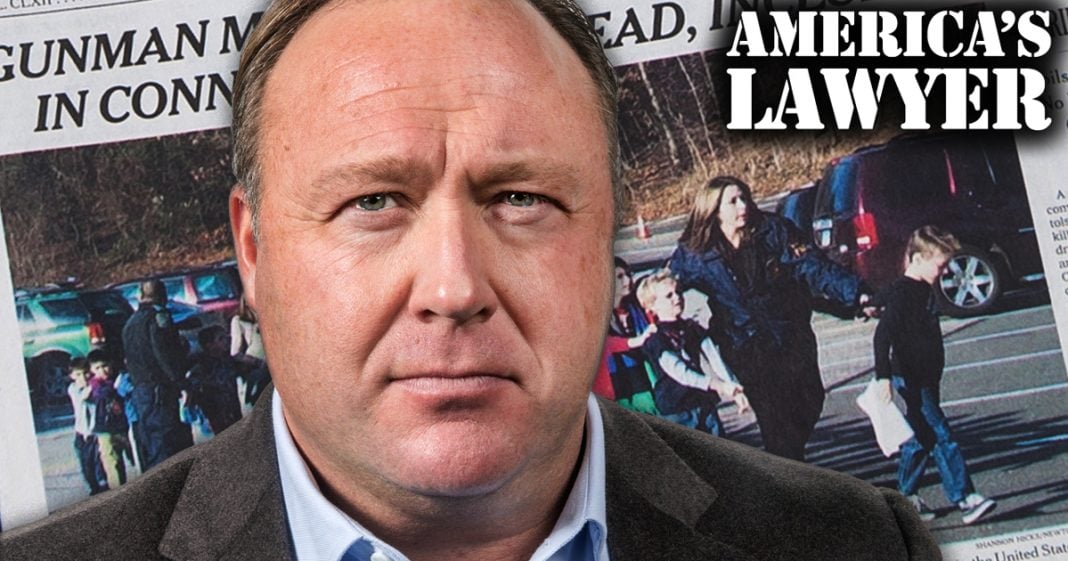 Via America’s Lawyer: InfoWars founder Alex Jones is finally facing the consequences of his years of spreading conspiracy theories and fake news. Farron Cousins fills in for Mike Papantonio on this episode of America’s Lawyer to explain more.

And finally tonight, some good news. InfoWars founder Alex Jones is finally facing the consequences of his years of spreading conspiracy theories and fake news. A judge in Texas last week ordered Jones to pay nearly $100,000 in court costs for the families who are suing him over his claim that the Sandy Hook massacre was a hoax. The families of the victims filed suit against Jones years ago for his claims after they began receiving death threats from deranged InfoWars viewers. This is just the latest blow to Alex Jones and InfoWars in this particular case, and hopefully it provides a little bit of relief for the families who are still grieving over the loss of their children. Furthermore, let’s hope that this actually sends a message to the purveyors of fake news all across America. Outlooks, outlets like InfoWars need to be on notice that spreading conspiracy theories and fake news can come with a hefty price tag.

And that’s all for tonight, but you can find us on Twitter and Facebook @facebook.com/rtamericaslawyer. You can watch RT America programs on Direct TV, Channel 321 and you can stream them live on YouTube. I’m Farron Cousins and this is America’s Lawyer, where every week we tell you the stories that corporate media is ordered, not to tell because their advertisers won’t let them. Have a great night.