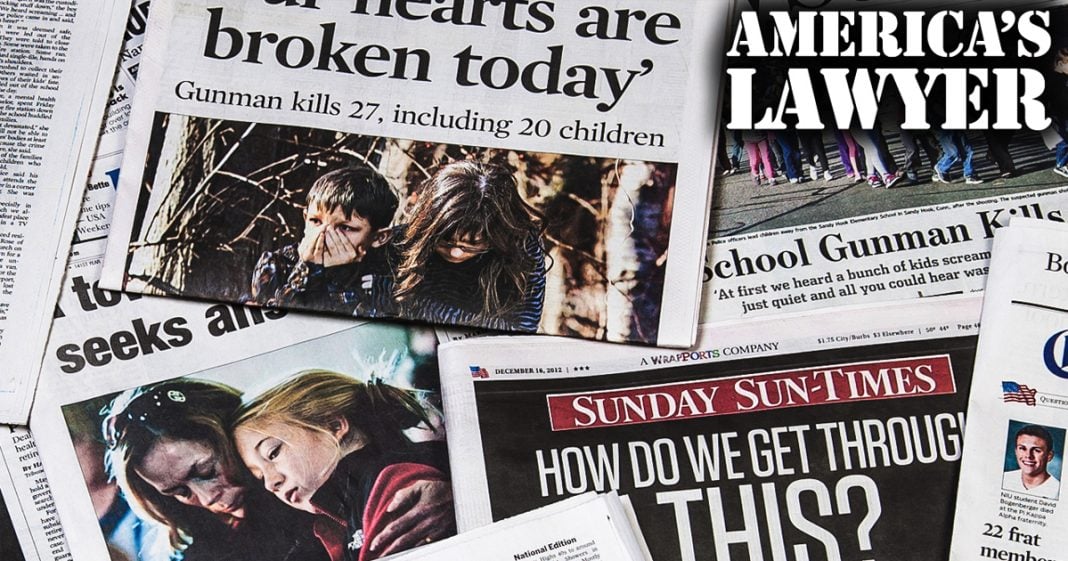 Via America’s Lawyer: Farron Cousins and legal journalist Mollye Barrows break down a ruling that could break the immunity back of the gun industry after the courts allow a case against them to go forward on behalf of Sandy Hook survivors. Farron Cousins fills in for Mike Papantonio on this episode of America’s Lawyer.

Farron Cousins:                  For over 10 years, gun manufacturers enjoyed a pool of profits with a federal law that prevented survivors of gun violence from holding gun makers responsible. But that looks to be changing now. Last month, the Supreme Court allowed a major case against the industry to go forward that was filed by family members of victims from the Sandy Hook shooting. Joining us now to discuss this is legal journalist Mollye Barrows. So Mollye, first off, what is this case? You know, what’s happening right now?

Mollye Barrows:                So it’s interesting, as you said, the gun industry has felt pretty immune from lawsuits like the one that’s being petitioned in this case for years, at least since 2005 when that federal law was passed. But this particular case is called Soto v. Bushmaster Firearms International, which is essentially Remington. That’s their parent con, company, and it’s a family members of some of those people that were killed in Sandy Hook. You remember the kindergarteners and the teachers that were killed.

Mollye Barrows:                When the kid walked in with the AR 15 and basically opened fire. And they’re saying that Bushmaster/Remington illegally marketed these weapons in a, in a military, for use in a military style way, basically military style mission. And that this shooting was the result of that. And the, traditionally lawsuits like this have not been able to move forward because of that 2005 law that was passed, The Protection of Lawful Commerce in Arms Act. And we can get into that a little bit, but, the gun industry said, hey, we don’t, you know, we want to strike this complaint. This case shouldn’t be allowed to move forward because of this federal law that basically supersedes their complaint.

And the US Supreme, or no, the state Supreme Court in Connecticut said, oh wait one second, we are going to allow this to move forward because these people are bringing their case forward on grounds that you illegally marketed it. And it’s not just targeting gun regulations. So that particular federal law really hammers down on individual States that are trying to pass laws that hamper who can own a gun, who can possess a gun. And that’s not the angle that they were taking with this case. So basically they said this is more than just about targeting laws that affect gun regulations. This is a bigger issue in how you marketed it, so we’re going to allow this case to proceed. And of course they went to the US Supreme Court as well, and you know Supreme Court was like, eh, let’s let it move forward. See what happens.

Farron Cousins:                  So, so the, the law itself, the one that says you cannot sue the gun manufacturers, it is limited in what it actually says. It’s basically saying like, look, just because somebody goes in and commits a mass shooting you, you can’t sue the person or the, the maker of that gun. But, then you get into the kind of muddy area, you start looking at, well, gun violence is a national health epidemic.

Farron Cousins:                  And you’re starting to say, well, okay, I can’t sue you just because your weapon was used in this. But once we start looking at your practices and the overall impact, that’s where this law, oops, we didn’t cover that. You guys are in trouble now, right?

Mollye Barrows:                Yeah, and you’re exactly right and this particular case is going to give, you know, folks that have been opposed to gun rights advocates and really not so much your average person that’s just supporting, you know, their second amendment rights. They’re really talking about the industry in general, which has been manipulating laws in order to protect their profits. So this case involving the Sandy Hook victims that Connecticut has allowed to move forward is going to give a jury a chance to hear about some of those practices, to get that information, to see the bigger picture. And I think that’s why you’re gonna have so many States, state attorneys general watching this to see how it comes out. You may see other lawsuits of course that follow. But going back to your point on the 2005 law, the PLCAA, you know, that was passed in 2005 by the US Supreme Court, mostly the one who wrote the majority of the opinion was justice Scalia.

And he took a lot of criticism for it because at issue was the second amendment and it wasn’t just applying to the right to a militia to bear arms against any opposing government or corrupt government, but it, it focused more on an individual’s rights. And it’s a number of States that use this particular logic, which was criticized heavily by the way, that said, hey, you shouldn’t be, you know, yeah, that’s fine. But our founding fathers were really more about protecting us from a corrupt government. We’re fine that individuals feel like they can have the right to protect themselves, but this isn’t just about protecting an individual’s right to own a weapon. We have to look at the fuller purpose behind it. And Scalia was criticized for essentially having more political speech, political wordplay in his decision as opposed to judicial logic. So this 2005 law was a result of what you had mentioned earlier.

It was the gun industry being concerned that they were going to see the same fate as what you saw with big tobacco in individual States. Fred Levin of our own Levin Papantonio spearheading that effort right here in Florida, which started a wave of lawsuits of States saying, hey tobacco, you’re making our people sick and we want you to pay for it. And so the gun industry sees these, the outcome of some of these cases and they were like, oh boy, we’ve got lots of people dying from our stuff too. We don’t want to be personally held accountable. We don’t want our manufacturers held accountable for people dying in mass numbers. And there has been a 17% increase in gun violence since that law was passed, 10 years, well, it’d be 14 years ago now.

Farron Cousins:                  And prior to that, violence existed, it was out there, but these two things, when they came together and exploded, really, that’s when we saw the numbers spike. As you just said, a 17% increase just since these two things have happened. You know that, that’s not an accident. That’s not a coincidence.

Mollye Barrows:                Because that is ultimately, you even have state’s attorneys general that are supportive of the gun industry writing letters about this saying, well, you know you’re going to hurt their profits and we certainly don’t want to impact their economic activity. Well, I sure don’t want to have to see parents grieving over a dying kindergartener because some lunatic man should get his hands on an automatic or semiautomatic weapon, any kind of weapon that’s used in these kinds of cases, whatever the age of the victim. If it can be prevented, it should be prevented. This isn’t about second amendment individuals having the right to bear arms protect themselves in their own homes. That’s not what we’re seeing. We’re not saying John Smith with a handgun killing, you know, that, that certainly happens. But for the most part, what you’re saying though, headline making cases are the ones where it’s mass killings and, or individual shootings by a person who had mental health problems, which is a whole another issue.

Farron Cousins:                  You know, but what we’re saying, those, those of us who say things have to change is maybe, just maybe, the same weapon that you use if you’re a soldier in the trenches.

Farron Cousins:                  Maybe the guy down the street who’s paranoid of the government coming and knocking down his door and thinks there’s black helicopters flying around his house, maybe that guy shouldn’t have. And just maybe if we do that, we’d all be a little bit safer. Mollye Barrows, thank you very much for talking to us today.