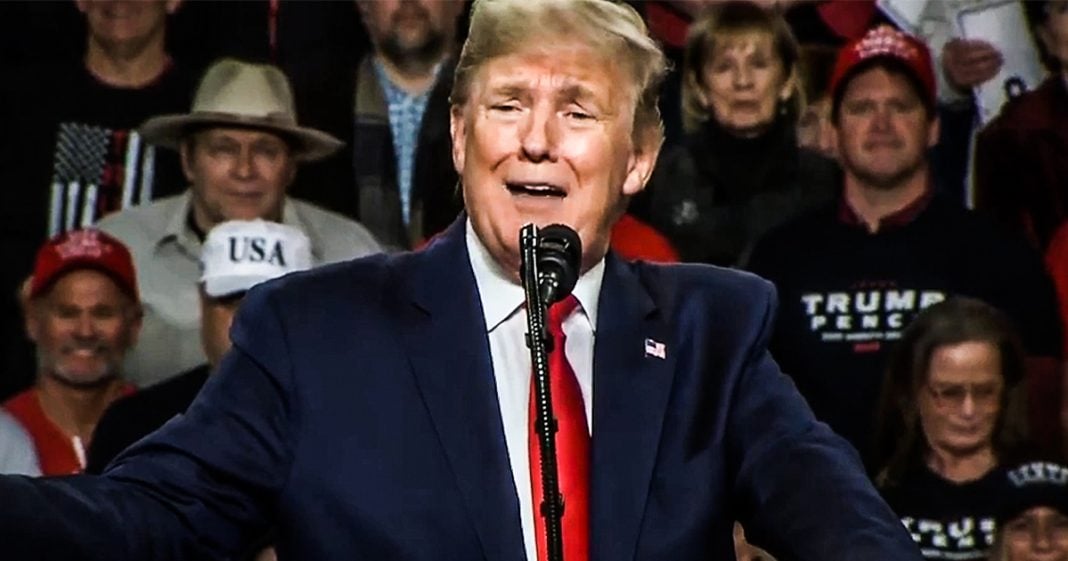 During his rally in Ohio on Thursday, Donald Trump complained that he was not immediately nominated for a Nobel Peace Prize for NOT starting a war with Iran. This is the same man who, earlier in the week, threatened to commit war crimes against Iran which led to a global backlash against the President. Ring of Fire’s Farron Cousins discusses this.

So Donald Trump held a rally last night in Ohio, and as usual things went off the rails pretty quickly. There was his talking point that all Democrats are horrible, horrible people, he said. Reminiscent of Hillary Clinton’s basket of deplorables when referring to the actual horrible people who supported Donald Trump. Not all of them, just the actual horrible people who like to wear white hoods and carry Tiki torches in their little khaki pants. But nonetheless, Trump said, all Democrats are horrible and he gets away with it. So whatever. But it was this statement here that was truly, truly weird, not just what he said, but also how he said it. Here it is:

So let’s get something out of the way real quick here, Mr. President, just a couple of days ago, four or five days ago maybe, you threatened to commit war crimes and then you re threatened to commit war crimes after people got mad about that. And then after people got mad that you said it a second time, you went and said it a third time on air force one. Okay. Three different times you threatened to commit war crimes. Now you have the audacity to whine about the fact that you’re not immediately nominated for a Nobel peace prize because you didn’t start a war that you were trying to start in the first place. I don’t understand how that works. And second of all, your claim that the leader of Iran’s now nominated for a Nobel peace prize, where? I can’t find that information anywhere. That’s a straight up lie that you told that crowd and they cheered because I’m assuming none of them have access to Google.

Either that or they truly are just a cult and they take everything you say at face value and believe it without ever once questioning it because no, there is no sudden nomination for a Nobel peace prize for the leader of Iran. There is no Nobel peace prize for you because you stopped a war that you had wanted to start anyway. You were the aggressor here, Trump. You threatened to commit war crimes. Why in God’s name would anybody nominate you for a Nobel peace prize for that? You have turned your back on the other world leaders who are actually out there committing these atrocious acts that you tried to attribute to Suleimani. There are actually people out there leading countries doing those things right now. Some of them are your good buddies running Saudi Arabia. We know about the crimes against humanity they have done. We know that they are funding the bad guys over in the Middle East, selling them our weapons that we’re selling to Saudi Arabia and then using those to kill innocent civilians and occasionally US troops, but yeah, we’ll let them go because they buy lots of your condos.

They buy lots of our weapons and they give us lots of oil. Well, sell us lots of oil, and those are the only three things that matter. Now, it used to just be, they buy weapons and give us oil, but since Trump’s president, it’s, they buy weapons, sell us oil and pay lots of money for his horrible condos. So no Trump, you haven’t done a single thing throughout your entire administration to warrant consideration for a Nobel peace prize, let alone winning that prestigious award. But that’s all you want, right? You already got the presidency, you allegedly have that billionaire status, you’re known around the world, but that’s still not enough for you. Your narcissism makes you want even more. But that Nobel peace prize is something that is always going to be unattainable for you. But Barack Obama got it, and that is going to haunt you for the rest of your days.