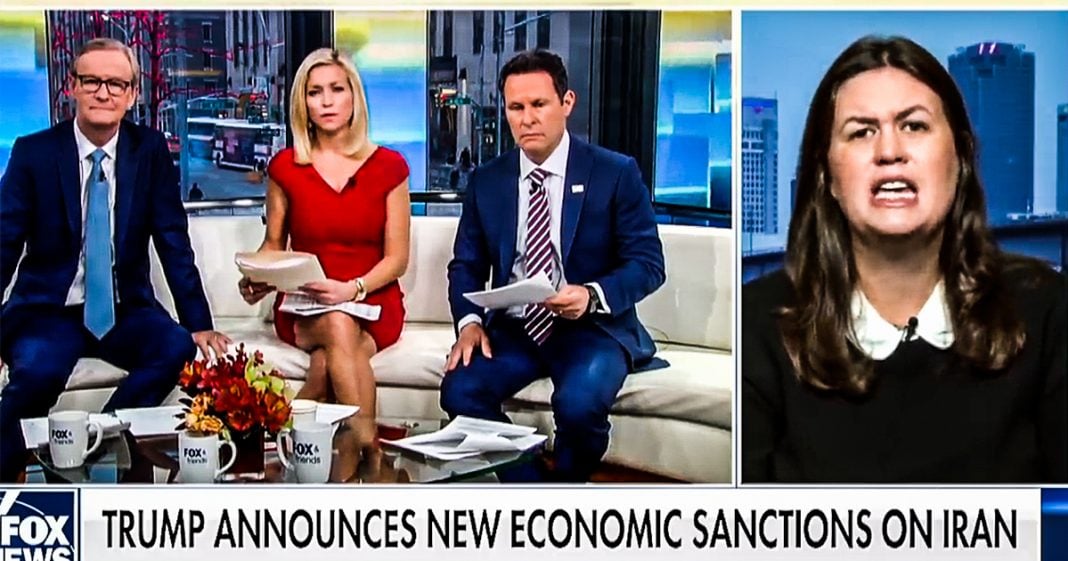 Newly minted Fox News contributor Sarah Huckabee Sanders went on Fox & Friends on Thursday to complain about Democrats (and even a few Republicans) in Congress voting to limit Trump’s ability to strike foreign countries with our military. She said that she couldn’t think of anything dumber than this idea, which is funny considering that the Constitution gives sole authority to declare war to Congress. Is that what Sarah thinks is dumb? Ring of Fire’s Farron Cousins discusses this.

Well just what everybody has been waiting for, Sarah Huckabee Sanders, she is back folks with her new gig as a Fox news contributor and one of her first appearances here yesterday on Fox & Friends certainly did not disappoint. This is vintage Sarah Huckabee Sanders out there lying, name calling, trying to pepper in a little bit of her phony religion into it. And without further ado, here it is:

Ainsley Earhardt:                Sarah, the president said yesterday the US is ready to embrace peace. He’s calling for more economic sanctions on Iran’s already struggling economy. He did say that Iran is standing down. So why is the House putting up this resolution to try to limit the, the president’s powers?

Sarah Huckabee Sanders:                           You know, I can’t think of anything dumber than allowing Congress to take over our foreign policy. They can’t seem to manage to get much of anything done. I think the last thing we want to do is push powers into Congress’s hands and take them away from the president. Any Democrat that doesn’t understand that America is safer, now that one of the most dangerous terrorist in the world is rotting in hell, is completely naive and completely misses what we need to have in a foreign policy. And the last thing I want to do is see them take power away from president Trump and put it into their own hands. I don’t think anything could be worse for America than that.

Okay. So there’s a lot to unpack from that deranged clip. But I want to start with her suggestion that giving Congress these war powers, powers over foreign policy, I guess as she referred to it, which isn’t even what it is, but, but nonetheless, the dumbest thing she could think of, the dumbest thing. And by extension, obviously Sarah Huckabee Sanders thinks that the constitution it, itself is, is dumb because you see, Sarah, it’s not that yesterday anything changed with this war powers resolution. It really didn’t, really didn’t because since that constitution was drafted a couple of hundred years ago, Congress has actually always had that power. You see, here it is article one, section eight, specifically States that Congress has the power to “to declare war, grant letters of marque and reprisal and make rules concerning captures on land and water to raise and support armies and to make rules for the government and regulation of the land and Naval forces.”

If you want to go even further into it Sarah, which I know you don’t, you could also look at the war powers act of 1973 that also says that the US Congress is the sole authority when it comes to declaring war. And that con, the president, whoever it may be, has to seek Congress’s approval for any kind of sustained attack. So sure, the president can every now and then launch a missile or two, but that’s about it without congressional approval. So what you’re complaining about, the thing you’re saying is really dumb, the dumbest thing you can think of, because you can’t think very hard obviously, is actually already in the constitution. It’s already written into the US law, which you apparently think is dumb. But now there’s a second part I want to address, the weird claim you made about Suleimani burning in hell. Do you know that?

Does the devil talk to you personally? Does he let you know who comes and goes from there so that you’re not shocked when you finally get there? Is that what’s happening here, Sarah? Because that’s the only thing I can assume because you have no idea, right? You don’t, you don’t know this guy. First of all, you don’t even know that heaven or hell are real. Like you’re just throwing that out there as a bone for evangelical base for your eventual run, for the Arkansas governorship. You want those people down there in the Bible belt to think that you’re one of them, that every bad guy goes to hell and every good guy goes to heaven. But here’s the thing, Sarah, if you want to talk about who’s good and who’s bad, according to biblical terms, thou shalt not kill, does not come with any caveats.

So that would mean that every single member of the military who’s ever killed someone, every single president who’s ever ordered the killing of someone by military force, Democrat or Republican, they would all immediately be going to hell. That’s the bottom line. That’s how it works according to the Bible. And you, yourself, you’re in trouble too, because I’m pretty sure one of those commandments is thou shalt not bear false witness. That means you can’t lie, Sarah. So unless you are genuinely sorry in your heart, and you have gone to seek penance, then I’m sorry, Sarah, but that place where you think Suleimani is, you better hope it doesn’t exist because that’s where you’re headed too.