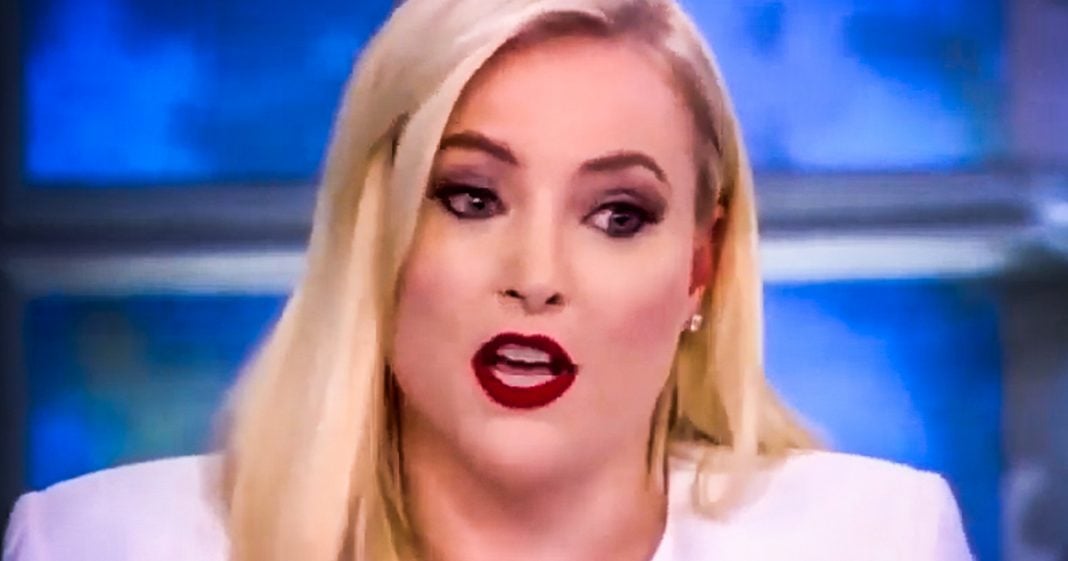 According to a new report by Page Six, Meghan McCain doesn’t have any friends at The View, including her conservative co-host Abby Huntsman. Her on-air antics have driven most people away, but behind the scenes she is apparently just as rude and condescending to people as she is on the air, and that has alienated the few people who may want to still interact with her given her political views. Ring of Fire’s Farron Cousins explains what’s happening.

You know, several times a week we see stories popping up, little video clips emerging of Meghan McCain on The View doing something that most would classify as stupid. She puts her foot in her mouth, you know, she tries to interrupt the other people. She tries to yell over them. She tries to make these slam dunk points and then herself ends up getting dunked upon. Well, according to a new report from Page Six, these antics of Meghan McCain on The View have alienated everyone who works on that show from her. To put it bluntly, Meghan McCain has no friends left at ABC and that includes her conservative cohost, Abby Huntsman, who much like McCain only has that job because her father was in politics. But here’s the thing, Abby and Meghan actually agree on their political views, but according to this Page Six article where they actually spoke to people who work at The View, Meghan is so rude, so dismissive and derisive and condescending, not just on the air, but behind the scenes that even Abby Huntsman, who used to be her friend cannot stand her anymore.

They don’t talk. Nobody, according to this report, talks to Meghan McCain when the cameras are not rolling. She has no friends. She is all alone and she is in that position because she has put herself in that position. As these people who were interviewed for this story said, it’s the rudeness, it’s the condescension. It’s the constantly thinking that you’re better and smarter than everybody else, solely based upon who your daddy was. Meghan McCain has no business being on The View. She is not smart on issues of politics and she has proven that repeatedly. She honest to God, doesn’t know where she stands on the issues. One day she’s railing at Donald Trump and the Republican party for crapping on her father’s legacy. The next, she’s blindly repeating his talking points because she’s gotta be a good little Republican even though she’s only been a Republican for about 10 or 12 years now.

And yeah, she married a Republican who goes out there and lies every single day. So it’s now a part of who she is, kind of, because occasionally you see the liberalism trying to creep out of her, but she does her best to swallow it back down and spew these idiotic talking points. Meghan McCain has no qualifications to be on The View other than who her father was. She has a degree in art history, not political science, not in broadcast journalism, not in journalism of any kind, not in anything that would actually help with talking about politics on the daily. Now, that’s not an attack on people with degrees in art history. I’m just saying that her education, her training as a professional is not even in this field, but her dad was John McCain. John McCain was a long serving Senator. John McCain survived being tortured in Vietnam. John McCain ran for president multiple different times, and those were about the only things I can imagine on, are on Meghan McCain’s resume. Nothing about her because she has no accomplishments of her own, and now her horrible attitude has alienated the few people on this planet who could, if only for a few minutes actually stand to even be around her. That’s pretty sad.