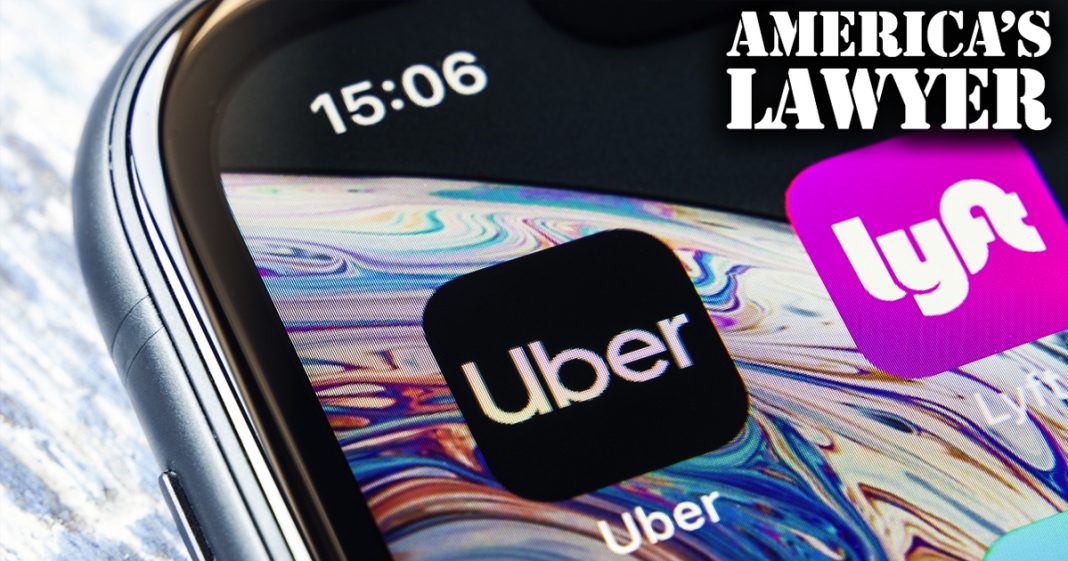 Via America’s Lawyer: Farron Cousins is joined by RT correspondent Brigida Santos to explain how a California state law meant to protect Uber drivers lead to massive layoffs of freelance journalists, writers, music producers and more. Farron Cousins fills in for Mike Papantonio on this episode of America’s Lawyer.

Farron Cousins:                  A new labor law has taken effect in California that will forever change the gig economy. The bill was designed to give wage protections and benefits to gig workers, but instead the bill has resulted in layoffs and controversy. RTs Brigida Santos joins me now with the story. So Brigida, why is Assembly Bill 5 so controversial? I mean, after all, this is something you know, we had wanted for a long time, protect gig economy workers, but it seems to not be doing that. So tell us what’s happening with this.

Brigida Santos:                   Farron, this is controversial because it wasn’t well thought out and had almost no input from the public before going into effect. Assembly Bill 5 changes the classification of independent contractors to employees. The point of the bill is to force ride share companies like Uber and Lyft to pay their workers benefits and overtime. That all sounds good, right? But under the new law, all workers are required to operate as businesses or be hired as full time employees. The latter not being so easy. Freelancing is basically no longer possible. Now there are some workers who could be exempt if they meet the strict requirements to maintain an independent contractor status in the state. Exemptions include those for workers in professions like medicine, architecture, engineering, accounting and real estate to name a few.

A federal judge has also temporarily exempted truck drivers from the law, but we don’t know if that’s going to stick. We are all for workers’ rights, but as a result of this new law, we’re already seeing companies lay off freelance workers instead of hiring them on as full time employees. Plus the companies that this law sought to reform Uber, Lyft and Postmates are refusing to comply and lobbying against the bill. Uber has even reportedly started developing new app features specifically for California drivers to help the company create ways to make sure that its drivers can be included on that exemption list.

Brigida Santos:                   So many. Now just before the holidays, hundreds of freelancers were cut from their jobs as companies prepared for this bill to roll out and now that it’s actually in effect, we can expect more cuts this year. Vox media, for example, has fired it’s California based freelance writers because under the new law, the company would be forced to classify people whom submit more than 35 articles every year as full time employees with benefits. The law has also effected other non-union freelancers in the state, including photographers, independent actors and musicians. Those are all industries that are booming right here in Los Angeles where I live.

The music blogger and author, Ari Herstand, recently published an article on his website Ari’s Take stating, if you want to hire a bass player to play one gig for $100 you have to put that bassist on payroll, pay unemployment taxes, provide benefits, get workers’ compensation, insurance, deduct taxes, work with a payroll company and W2 that bassist as they will now legally be designated your employee. He says that as a result, musicians and music producers will lose their jobs and gigs unless they set themselves up as a corporation and pay yearly fees and payroll taxes to keep the corporation running.

Farron Cousins:                  So, the big question is, who actually wrote this bill that seems like it’s such a disaster? Are they doing anything to revise it now that it’s received so much backlash?

Brigida Santos:                   The bill was drafted by democratic assembly woman, Lorena Gonzalez. Despite the backlash, she says she stands by it. Now, this is problematic because out of 57 million gig workers in California last year in 2019, 46% said that they chose freelance work because they were unable to work for traditional employers due to personal circumstances, including disabilities, age or health. AB 5 has now established the strictest test in America, which workers must be considered employees, and it sets a dangerous precedent for other States. You know, we don’t have strong unions in America anymore, and without those fighting for the rights of workers, we can really see the death of freelancing pretty soon.

Farron Cousins:                  You know, it, it, it’s really sad. I, I’ve done a lot of freelancing in, in my time writing for various websites, different magazines, and it’s been very helpful. And yes, I would have lost those jobs, had those organizations at the time had to hire me on as a full time person. They simply could not afford it. And so that’s why when you’re talking about some of these freelancers, yes, Uber and Lyft drivers have been getting screwed. They’ve been getting the raw end of the deal on this for years and years and years.

But there’s others for whom freelancing works tremendously. This is what they want. This fits in with their lifestyle a little bit better, allows them that freedom. And unfortunately, this piece of legislation with the way it was written is having a huge impact on all sorts of media. As you pointed out, musicians are facing trouble now. Actors are facing trouble. So Brigida Santos, thank you very much for telling us this story today.