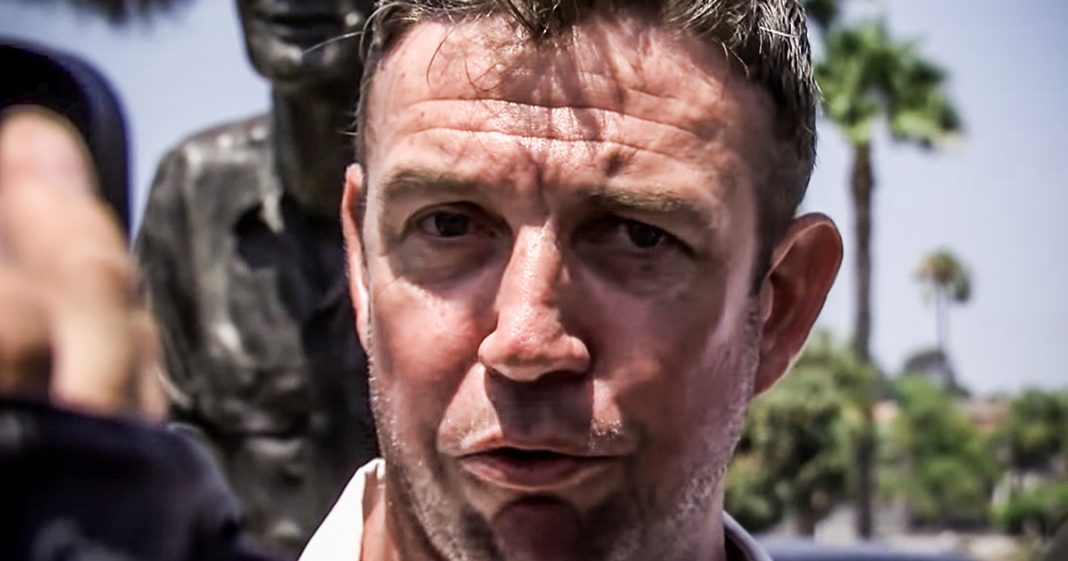 Republican Representative Duncan Hunter has finally resigned from Congress a month after he pleaded guilty to corruption charges stemming from his misuse of campaign funds. Democrats are frequently forced out of office at the first sign of questionable behavior, but Republicans were far more silent about Hunter’s criminal activity and allowed him to stay. Ring of Fire’s Farron Cousins discusses this.

Republican representative Duncan Hunter yesterday finally submitted his letter of resignation. Two letters, actually, one sent to Nancy Pelosi, speaker of the house of representatives, the other sent to California governor Gavin Newsome. He had to send it to Newsome because Hunter represents a district in California. So we had to send it to the governor so the governor can make plans to either hold a special election or considering we’ve got an election coming up in November. Anyway, just let that play out and leave the seat empty until then. But here’s the thing, Hunter, a month ago, a month before he sent his letter of resignation, pleaded guilty to corruption charges. So the guy admitted in court, he said, okay, yes, I did it. I’m guilty. I’m a criminal.

I’m just going to take my sweet time and not resigned from Congress. And uh, I think what annoys me the most about that, and I’ll get into some of the charges about Hunter in just a moment because they’re absolutely insane. But what annoys me about that is that Republicans remained completely silent about this issue throughout the whole investigation. Every time new evidence came out about Dunkin Hunter. Nobody said a thing on the Republican side. Meanwhile, we have had Democrats who have been accused of far less than this who immediately face backlash from their own party and are told they need to resign. We saw with Al Franken, we saw it most recently with the Katie Hill out there in California too. She resigned immediately after it was revealed that she was having a relationship with a staffer, immediately resigned. She didn’t even technically do anything wrong and she resigned for fear of what the party would do to her.

Duncan Hunter admitted he committed crimes. The evidence was overwhelming against him. Hundreds of thousands of dollars misused in campaign funds and he got to stay. He got to stay until he chose to leave because he’s going to go to prison. That’s insane. That’s what’s insane to me is that Republicans should have been calling for this guy to resign the minute this indictment came out against Hunter months and months ago, but they didn’t because for Republicans, criminal behavior is totally fine. Hell at this point, it’s almost a prerequisite for holding a job within the party. But here are some of the charges against Hunter. Um, the indictment which came out actually in August, 2018 2018, uh, accused Hunter of using $200,000 in campaign money to fund family travel, school tuition, jewelry, groceries, gas, et cetera. Prosecutor said he also spent the funds on extra marital affairs and flights for his family’s pet bunny. He tried to conceal the illegal spending by listing it in federal records as donations for military veterans and other campaign related expenses.

So not only, all right, this guy’s having an affair, he’s flying his bunny all over the country. And I don’t mean that metaphorically. I mean literally a rabbit flying it around the country having an affair. And then when he gets caught on the affair using the campaign funds, he tries to say, no, no, no, no. I was giving, I was making donations to veterans. I was giving this to the people who go out there and fight for our freedom, which you didn’t. You were using it to conceal your affairs so that your wife and kids didn’t find out. And in fact, that’s actually why your wife went ahead and pleaded guilty long before you did because she didn’t want the kids to hear all the info about your affair. She wanted it to go away because she unfortunately was involved with it too. She was spending some of this money, but again, if a Democrat had done this, they would have been forced out of office before they even had their first day in court. But when it’s a Republican, they’re allowed to stay in office up to a month after they have already pleaded guilty and admitted that they are in fact a criminal.