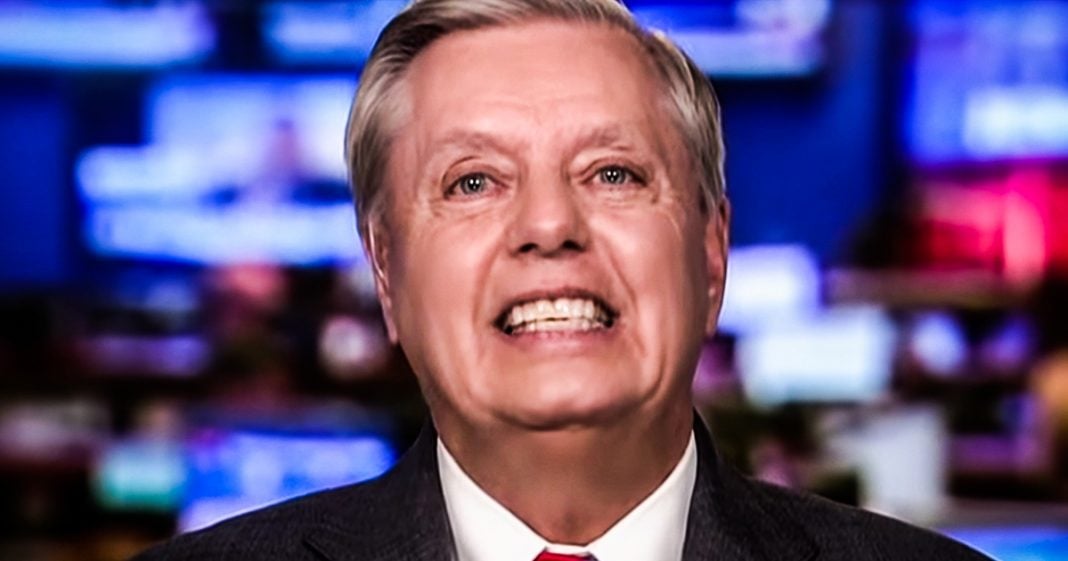 According to Republican Senator Lindsey Graham, the impeachment trial in the Senate is going to begin next week. Even though the Senate still doesn’t have the actual articles of impeachment, the Republicans are ready to move on with the trial so that they can quickly exonerate Trump and start trying to convince the public that the Democrats made everything up. Ring of Fire’s Farron Cousins explains what’s happening.

Well folks, the moment we have all been waiting for might finally be arriving next week. According to Lindsey Graham last night, Lindsey Graham, while speaking to Sean Hannity on Fox news, said that the Senate is prepared to start their impeachment trial against Donald Trump next week. And what’s interesting about Lindsey Graham’s claim here that we’re starting the trial next week, is that they still actually don’t even have the articles of impeachment. So technically they don’t even have the things that the entire trial is based off of. So, so they don’t really know exactly what they’re doing here. But what they do know is that Mitch McConnell with his gang of Republicans in the Senate voted on a set of rules that is going to ensure that this thing is an absolute scam so that they can quickly exonerate Donald Trump. There’s been some back and forth between Pelosi and Mitch McConnell. Pelosi says she is not going to send over the articles of impeachment until McConnell agrees to some kind of trial framework that includes the calling of witnesses and the allowance for new evidence.

Mitch McConnell, who again has already voted on the rules, has said, okay, we may allow these things, we’ll leave the door open to that, but right now we’re not going to let that happen. But if we decide we do want to call witnesses all, it’s going to take as a simple majority vote. And if we get the majority votes, insurer, call all the witnesses you want. Each one by the way, has to be approved by a majority vote in the Senate and who has the majority in the Senate. It’s not the Democrats, it’s the Republicans. And even if Democrats managed to flip one or two Republicans and somehow we ended up in a tie on the vote, well then guess who the tie breaking vote goes to? That would be vice president Mike Pence. The Democrats have no chance here in the Senate. And Pelosi at this point is holding onto those articles of impeachment for show.

She may as well go ahead and send them over. At least that way you can say that you did it instead of waiting for the Republicans to exonerate Trump and find him not guilty. And then the public says, well, Pelosi didn’t even send them over. What was the point of this? They’re gonna come back and blame the Democrats on this so you may as well go ahead and send it over. Now let them blame the Republicans, let them know that the Republicans did have those articles of impeachment, looked at them, saw them, debated them, and discuss them, and then still said, you know what? We don’t care. He’s innocent, but if Pelosi hangs onto them, then people are going to say, well, of course they acquitted him. They had no info to go on. Pelosi didn’t send that over so we can’t do this. Right? All right, here’s the thing, and this sucks to even say, but we’ve already lost on impeachment. It ain’t going to happen. Sure. So go ahead and send them over to you.

You’re only hurting at this point by not sending him over. Trump’s not going to get removed from office. The Senate is not going to convict him, and I would be shocked if even one single Republican sides with the Democrats on this hell. I’ll be even more shocked if every single Democrat is on the same page here. Cause I’m willing to bet Doug Jones and Joe Manchin, possibly even a couple others, are going to vote with Republicans on this. So you know what? Let the stupid thing start next week. Let’s get this over with and let’s move back and focus on the issues and focus on beating Trump in November’s election because that is the only way you will get this man out of office because impeachment, unfortunately has failed.