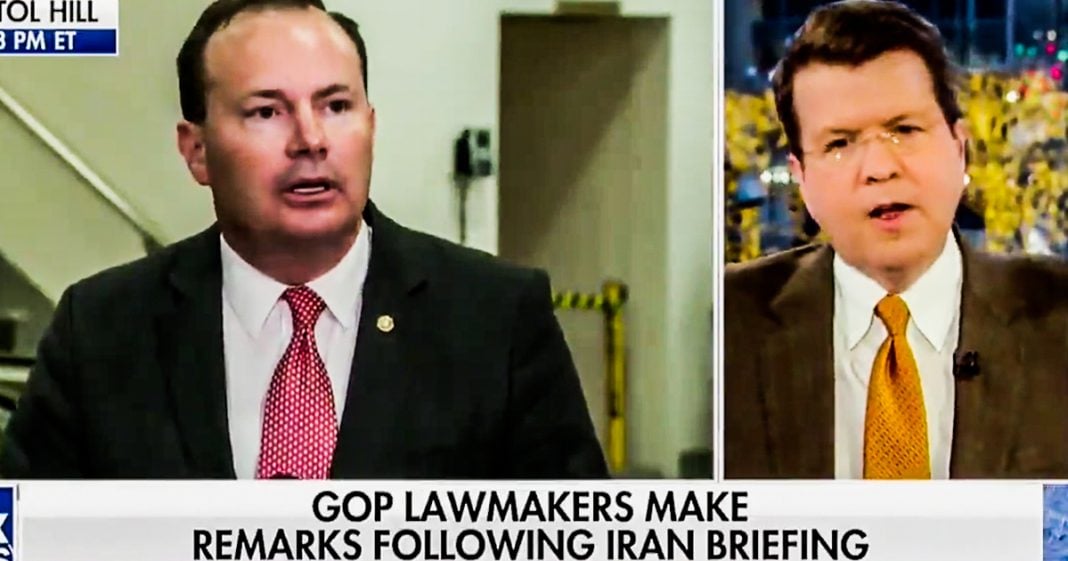 Republican Senator Mike Lee wasn’t happy about Trump’s speech on Iran yesterday, and he wanted the entire world to know it. Unfortunately, Fox News wasn’t prepared for Lee to take such a strong stance against the President, and the network had to awkwardly cut away from their live feed of Lee speaking in D.C. Ring of Fire’s Farron Cousins explains what happened.

Republican Senator Mike Lee from Utah was certainly not happy with the Senate briefing on a ran yesterday and he decided that he wasn’t going to hold back and he was going to let the entire world know it and Fox news, assuming that no Republican would ever criticize Donald Trump was actually airing. Mike Lee’s rant about their briefing live on air, but then when they realized that he was attacking Trump and not supporting him, they tried to awkwardly cut away from it as if they had other things to do. Here’s the clip. Take a look at what happened.

Mike Lee:                     Now I find this insulting and demeaning, not not personally, but to the office that each of the 100 senators in this building happens to hold. I find it insulting and I find it demeaning to the Constitution of the United States to which we’ve all sworn an oath. It is after all the prerogative of the legislative branch to declare war. Article one section eight makes that very clear. Alexander Hamilton in Federalist number 69 made clear that this was a sharp contrast from the form of government that we had prior to the revolution. A form of government in which the executive, the King had the power to take us to war. He did not need the, the parliament to weigh in on it, to support it. That was the Parliament’s job after the fact, after we had gone into war. This Hamilton explain in Federalist 69 it’s exactly the reason why this power was put in article one, section eight in the branch of government, most accountable to the people with the most regular intervals. When we send our brave soldiers, sailors, airmen, and Marines…

What’s funny about that to me is that Neil Cavuto is typically pretty good on the air, not necessarily as content, but the way he handles himself, right? He doesn’t get shaken very frequently, and so right there at the end when he’s like, ah, yeah, we got a, we’re going to blah blah blah. That’s all folks, I guess? He didn’t even know what to say. He was confused. He was a little scared because nobody expected a Republican to come out and say, this was the worst briefing I’ve ever seen in my entire life, which is one of the things that Republican Mike Lee had to say. Rand Paul, to his credit, even though he’s a horrible human being, also came out and said, yes, I, I don’t believe anything.

They said this was a horrible briefing. And then of course on top of all of that, we had Donald Trump’s incredibly slurred speech about the entire matter. The facts are the Republicans are lying to us much like they did with a rock. They’re lying to us again saying there were imminent threats. Okay, well can we see these threats? Can we see the intelligence? And they say, no, no, you can’t. You can’t see the intelligence because as Mike Pence said, we don’t want to give you everything we have because that could then compromise some of our, some of our sources here. So we’re going to hide, you know, the most important information, right? It’s not because it totally doesn’t exist. It totally does. Mike Pence tells us, you just can’t see it much like with Iraq. Oh yeah. We have all this evidence of weapons of mass destruction and we’re going to show you a little bit of it, you know, and maybe not be so convincing, but Hey, the real stuff, that good stuff, we keep that locked away for ourselves.

Cause you know, we don’t want to compromise anybody. We want to keep our sources safe. And that’s why Rand Paul and Mike Lee were both like, yeah, this, this doesn’t fly. We’ve seen this show before and we have, you know, 17 years ago, not even that long ago. It’s so they were angry. And that’s good. We need everybody to be a little bit angry right now about this issue. We need to make sure that we do not get into yet another unwinnable, endless war in the middle East. And right now it appears that Donald Trump may have backed off Iran, at least for the time being. They struck back, didn’t kill any U S a citizens. So Trump seems to be okay, and let’s hope that we leave it at this. Let’s hope that it does not escalate any further, but if Trump, since his trouble on the horizon, if he needs another good distraction, he now knows that he has that Iran card in his back pocket. And as we’ve seen from the last week and a half, he is clearly not afraid to play it. Unlike Fox news, who will now be afraid to play any clip from Mike Lee for the foreseeable future.