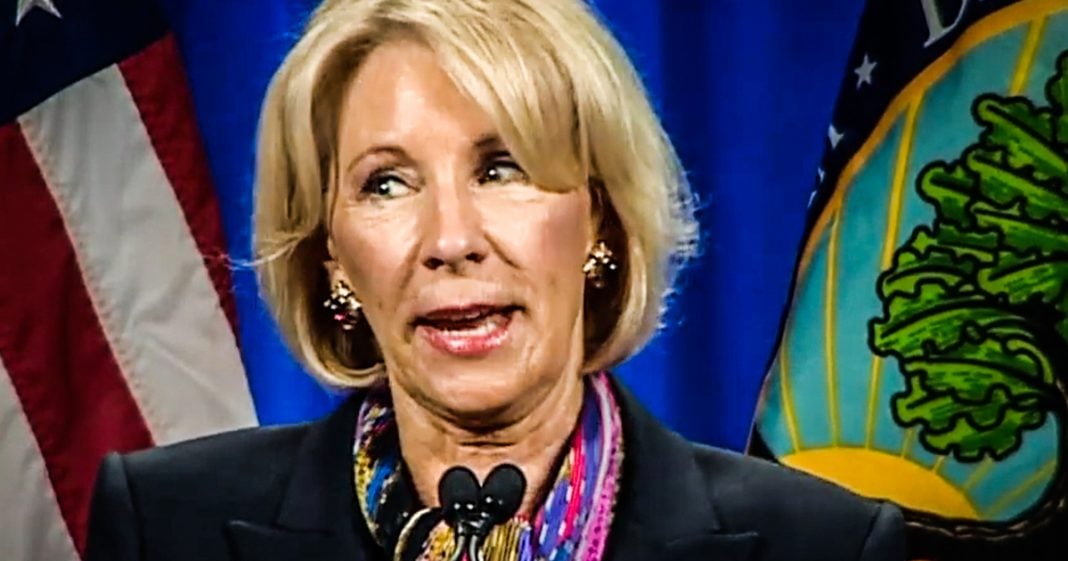 The judge overseeing the lawsuit against Betsy DeVos and the Department of Education is sick and tired of waiting for DeVos’s department to comply, and even though she’s already held DeVos in contempt, the judge now believes that this isn’t enough. So the judge is reaching out to the victims – the students who are being illegally forced to repay student loans that should have been forgiven – to tell her how she should punish DeVos further. Ring of Fire’s Farron Cousins explains what’s happening.

Well, they have been submitting those reports and they’ve also still been collecting student loans from the students who were scammed by Corinthian colleges. So this week US Magistrate judge Sallie Kim had finally had enough of this and considering the new evidence that judge Kim received from these compliance reports from the department of education, judge Kim has now to say, decided that she is going to allow the students to come up with a better punishment for Betsy DeVos. Apparently the $100,000 contempt fine isn’t enough anymore, according to the judge, and so she has granted the students who, by the way, two months ago there was 16,000 of them. These compliance reports that the department of education has submitted revealed that, oh, it’s actually a little more than 16,000 it’s 45,801 which is part of the reason the judge says, you know what? Maybe this original punishment wasn’t quite enough.

So she has now granted a motion by the plaintiffs, the students who brought this lawsuit in the first place and said, I’m going to let you file a motion to say that the original contempt punishment of $100,000 fine, that the department of education pays, which means actually we, the taxpayers pay it. I’m gonna let you come up with a better punishment and you file that with me and we’ll take it from there. So now Betsy DeVos might be looking at either a much stiffer fine. She could be looking at very serious contempt charges that could, believe it or not, land her in jail for her failure to comply or something, somewhere in between. But either way, the court system is sick of DeVos. These students, now 45,000 of them, are sick of Betsy DeVos. We, the public are sick of Betsy DeVos. She very clearly cannot follow the rule of law. She’s been slapped down pretty hard already for it. And the people that she has taken advantage of and helped to scam are now the ones in charge of her fate. That to me is a very fitting end for Betsy DeVos.