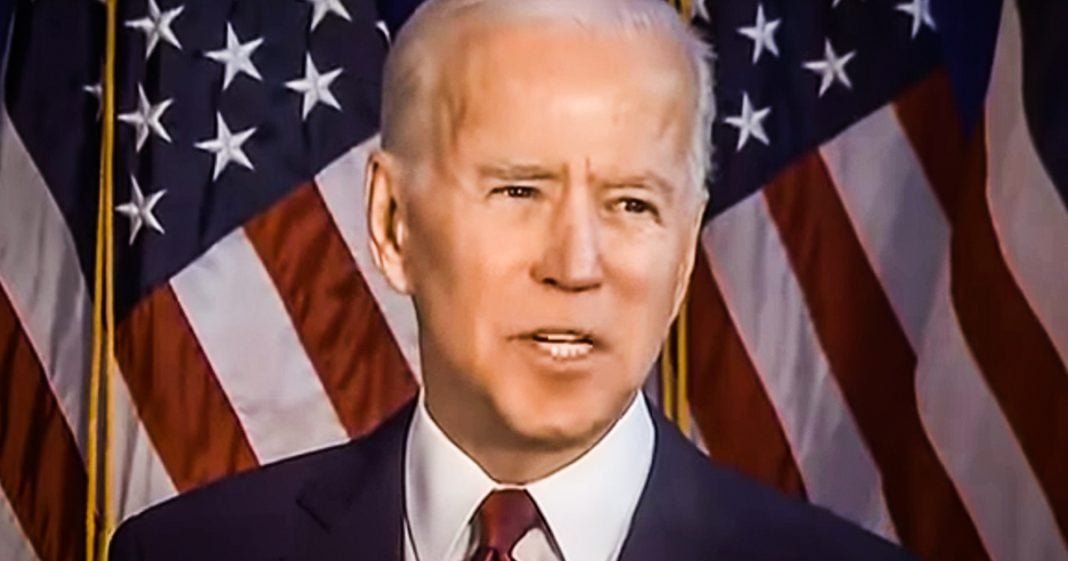 At a fundraiser in New York City this week, Joe Biden made a bold prediction that Republicans, including Mitch McConnell, could suddenly become “mildly cooperative” if Biden wins the presidency this year. Either he is planning on proposing Republican policies, or he hasn’t been paying attention for the past 12 years, because Republicans will not work with Democrats on ANYTHING that could benefit the American public at large. Ring of Fire’s Farron Cousins discusses this.

So I have now come to the conclusion that Joe Biden is one of two things. One, he is either living in a complete fantasy world or two, he is actually a moderate Republican. And the reason I think that these are literally the only two possible options for Joe Biden is because once again, he has made the claim that Republicans in the Senate are somehow going to magically start cooperating if Joe Biden becomes the next president of the United States. Now, he made these claims yesterday at a swanky fundraiser at $1 billion law firm in New York city, Skadden Arps. Joe Biden was there shaking hands and making these ridiculous claims. This is what he said. He said, that’s why I think you’re going to see even Mitch McConnell changing some ideas or being more, how can I say, mildly co-operative. Now that came at the end of a very long speech about, oh, Republicans may change their views because of Democrats have the majority.

You’re seeing it in the house. No, we’re not actually, Joe, seeing it in the house of representatives. We’re, we’re actually not. But you said that, you said it right here. It’s in the quote. And if you don’t believe me, you can go to the link in the description of this video. It’s all right there. He said it, he, he made this up. So again, either you’re living in a fantasy world or your actually a moderate Republican. Here’s the thing, Joe. I know that you think that Donald Trump is the only reason Republicans are not being cooperative right now. They all want to appease Trump. And that’s why we’ve seen this sudden shift, right? Let me tell you bud, that sudden shift happened in 2006, not 2008 when Obama was elected. It happened in 2006, is when Republicans decided we don’t need to work with Democrats anymore.

We have nothing in common with them. We have become far too polarized because we are polar opposites, really. So why bother? And then Obama got elected and things got so much worse with the Republican party. They couldn’t stand the fact that a black man was now the president of the United States. They held secret meetings in clubs in Washington, DC before he was ever inaugurated, including Mitch McConnell, by the way, and their expressed intent was to make Obama one, a one term president. Leave him with no accomplishments after that first term and get him kicked out of office. Joe, you were a part of that administration, man. You know this, you know this, and yet you have repeatedly made this idiotic claim that somehow Joe Biden’s going to come in there and by God you’re going to start working with me because no malarkey, right? You were a part of it, Joe.

You were there. You saw it. In fact, the only time you could actually get Republicans to work with you on something to agree with you to pass a piece of legislation was when you and Barack extended the Bush tax cuts. So yeah, that’s why I say the other option is that you’re a moderate Republican because if you think you’re going to get Republicans in the Senate to work with you, the only way to do that would be to propose horrible legislation that only benefits the top 1%. So if you’re planning on doing that, then sure I, I’m willing to bet you’re going to get lots of Republicans willing to work with you. You’ll probably receive more than just mild cooperation from Mitch McConnell on that. If you’re going to appoint right-wing judges, then yeah, they’re gonna work with you on that. But if you’re going to try to do a single thing that actually helps the American public, Medicare For All, which I know you don’t even support. A Green New Deal, which you also don’t support.

But let’s pretend that you did that you were decent for a second, Mitch McConnell’s already said he’ll never allow those things to pass his Senate. So why don’t you stop telling the public that Republicans are going to be normal again after Trump leaves. Trump is not the reason Republicans are insane. Trump is the result of years of Republican’s insanity. It’s not going to go away when he leaves. If anything, Joe, it’s going to get much, much worse. So stop telling people that Republicans are going to be normal because that just provides clearance for people to vote for Republicans. Tell it like it is. Tell them what you experienced after eight years of being in the White House with Barack Obama. Remind them of that and just maybe we won’t even have to worry about working with Republicans after 2020.