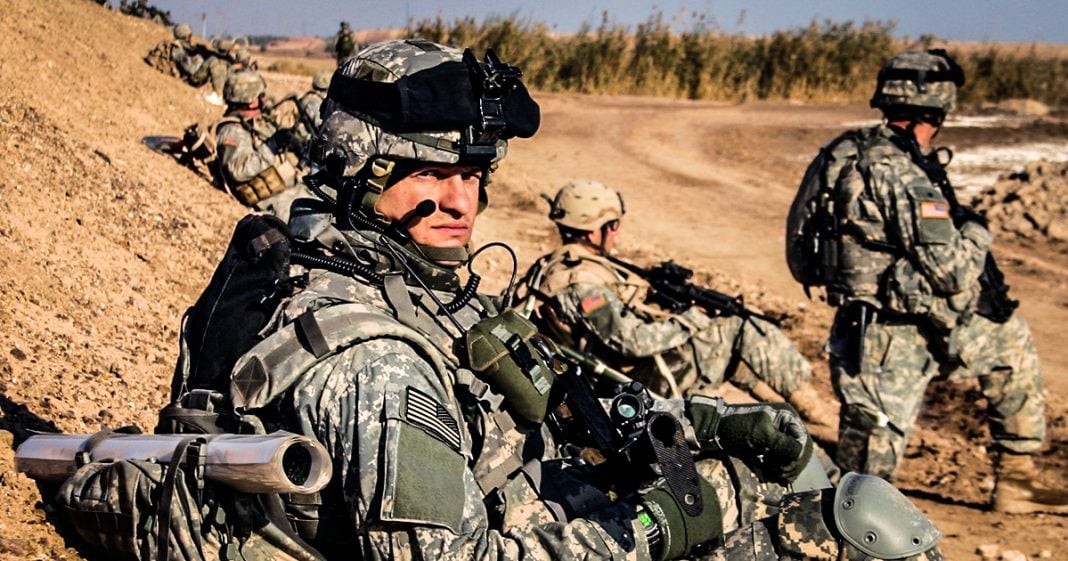 The Iraqi Parliament has voted to expel US forces from their country, and on Monday the Pentagon released a letter saying that they were complying and would be removing troops in the coming weeks. They then immediately said that the letter was a mistake and was never meant to be released because we aren’t leaving. Trump has already ordered an additional 3,500 troops to the region against the wishes of Iraq, and a withdrawal is nowhere on the horizon. Ring of Fire’s Farron Cousins discusses this.

In a shocking move yesterday the Pentagon announced in a letter to Iraq that we, the United States, would be pulling our troops out of the country in the next coming, coming days and weeks. Here’s what part of that letter said. It said, sir, in deference to the sovereignty of the Republic of Iraq and as requested by the Iraqi parliament and the prime minister, the combined joint task force will be repositioning forces over the course of the coming days and weeks to prepare for onward movement. Now, this was huge. Everybody got excited. Washington Post, Reuters picked it up and said, holy crap everybody, we’re getting out of Iraq. After 17 years, we’re finally leaving Iraq, only for the Pentagon to come out moments later and say, oops. Yeah, that was actually just a draft of an email that we weren’t actually going to send. Somebody accidentally sent it.

We’re totally not pulling out of Iraq. Yeah, sorry. Somebody accidentally sent this letter to everyone, including by the way, Iraq. They got this letter too, two days after voting to expel us from their country and we got this letter, we drafted it up and we said, hey listen, you voted us and you voted to get rid of us. We understand it. You know, things are kind of tense over there because of what we’ve done. So, yeah, we’re gonna leave. We’re going to honor your wishes. But we should have all known that this was a false from the start because let’s not forget that just a few days ago before Iraq voted to expel us, Donald Trump already announced that we were sending 3,500 more us troops over to Iraq. So he’s actually escalating. And even though that country has said, we do not want you here anymore, Trump has said, no, we’re going to go ahead and send a few thousand more troops your way just because we feel like we can.

And then the morons over at the Pentagon, who I guess we’re supposed to trust with handling this conflict, they can’t even get their stupid emails right. Much like the White House itself when it was trying to draft those impeachment talking points and accidentally sent them over to the Democrats instead. Oops. This administration seems to have a lot of problems when it comes to emails and sending the wrong things to the wrong people. This has happened too many times for it to just be accidents every time we’re dealing with grade A morons over there. But at the same time we also have to understand that yes, the Republic of Iraq, the Iraqi parliament voted to expel us troops from their country, but instead of honoring that, we have decided to stay, not just stay but escalate the number of troops we have over there.

We are now just like we really have been for the last 17 years, we’re an occupying force that is not in that country and that’s not okay. We’re now the aggressors as we’ve pretty much always been in Iraq, but now it’s official. They told us to leave and instead we sent more troops. There is no way around this. We aren’t wanted there and we’re not leaving. Now you tell me, does that sound like the actions of a country that’s there to, to liberate you or to protect you or does this sound like a group that wants to occupy you?