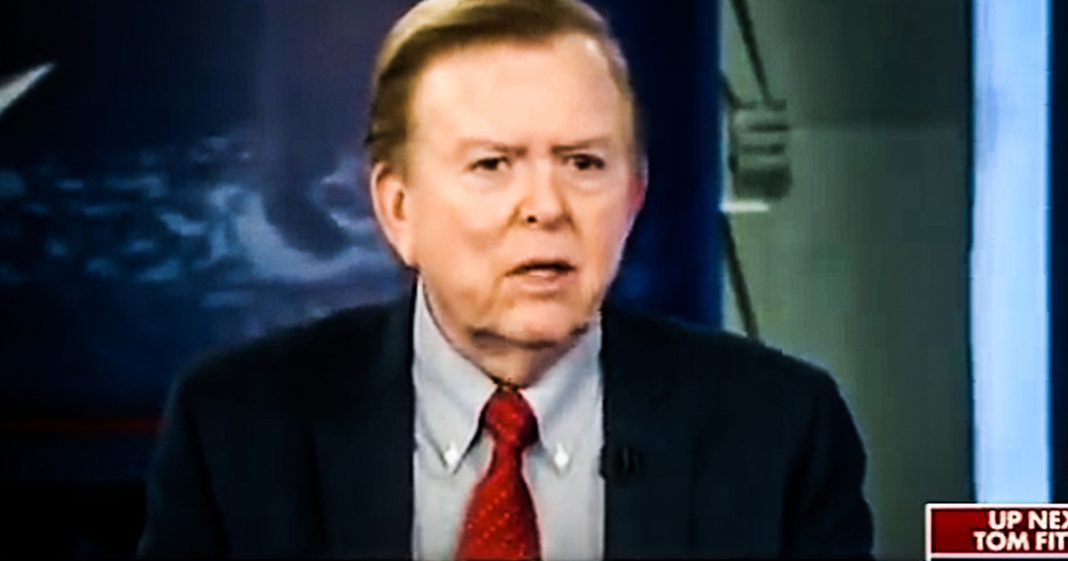 Fox News host Lou Dobbs has decided to go all-in with the Cult of Trump, going as far this week as telling his viewers that Americans actually have an “obligation” to serve Donald Trump, especially after all of the “good” that he’s done for this country. Not only do we NOT have that obligation, but what “good” things has this man done to benefit anyone who isn’t super rich? Ring of Fire’s Farron Cousins discusses this.

Typically, Sean Hannity gets the most credit at Fox news for being the biggest suck up to Donald Trump. But I think Lou Dobbs, who typically flies under the radar because he’s not as popular, Lou Dobbs really, really is the biggest Donald Trump’s sycophant over at Fox news, going as far yesterday as to tell his viewers that they actually have an obligation to support and to serve Donald Trump. Here it is:

Let’s make one thing real clear here, Lou, nobody in this country has an obligation to the president of the United States, whoever that president is, except I don’t know, maybe the secret service. Yeah, they signed up for that. The rest of us, no, he literally works for us. He, whoever the president may be, he or she has an obligation to us. They are accountable to us and not the other way around, Lou. But you, you seem to think that it’s our duty to blindly support whoever sits in the oval office as long as of course that person happens to be a Republican because I don’t remember you calling for servitude and obligation when Barack Obama was in office. I mean, you weren’t yelling at your audience telling them to stop criticizing president Obama during those years, were ya? No, that’s only something that applies when a Republican is sitting in the oval office.

And just to address your other point, also, all the good he’s done for this country, everything he’s done for us name one thing, name one thing, Republicans out there, that Donald Trump has done to make the lives of the majority of people in this country better. And you say, well, look at the economy. He didn’t do that. Not only that, but if you want to get into the real economic numbers in this country, then you better take a step back. Because yeah, the economy on paper looks like it’s doing great. The stock market looks like it’s doing great. More than half the country doesn’t own a single stock, so that doesn’t benefit them. Not to mention the fact that it was not Trump himself who made the stock market go up. The only thing he has done is make it go down. Then when he shuts his mouth for a couple of days, it goes back up until he starts tweeting again.

Then it goes back down and that’s not coming from me, that’s actually coming from Wall Street, the group that created the Covfefe index, so that could determine when there was going to be a crash and when there was going to be a rally based on how frequently the president tweets. Now, the economy’s not working for most people in this country. We’ve seen our real wages decline. We didn’t get a piece of that tax cut. Our jobs are being shipped overseas and we’re being forced to train our replacements. The trade war is absolutely decimating farmers. Here in the United States, consumers are paying upwards of $40 billion extra every single month because of it. Regulations are getting weaker, so we’re breathing in dirtier air and drinking dirtier water. So no, Mr. Dobbs and Trump defenders online, he hasn’t done any good for us, and therefore we have absolutely no obligation to act as blind loyalists to Donald Trump.