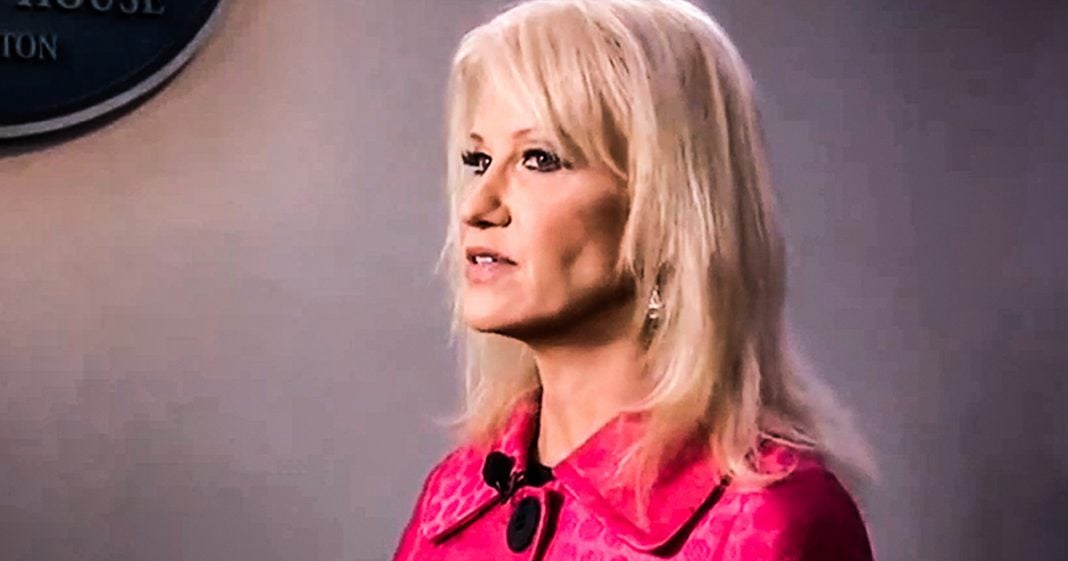 Kellyanne Conway spoke to reporters on Monday to walk back Trump’s comments about committing war crimes in Iran. After she tried to claim that the President never said he’d hit “cultural sites” in Iran, a reporter literally read the tweet where he said exactly that, but Conway STILL pretended that it never happened. Ring of Fire’s Farron Cousins explains what’s happening.

So over the weekend, Donald Trump suggested committing war crimes in Iran when he suggested that the 52 sites they were going to hit if Iran retaliates against the United States would include cultural sites. Now, this sparked huge backlash, not just here in the United States, but internationally with people attacking the president saying, you can’t do that. Well, in true form, Kellyanne Conway decided to put this whole thing to rest by talking to reporters and telling them what the president actually said. Here it is:

Kellyanne Conway:                   He said that he, he’s, was openly asking the question, why in the world they’re allowed to maim people, put off roadside bombs, kill our people, torture our people.

You know, it’s no secret that Kellyanne Conway is absolutely the queen of alternative facts, but what she did right there in that clip, that was not alternative facts. That was alternative reality because that reporter literally read Donald Trump’s quote from his tweet, the president’s own words, which he even said in the later tweet, this is official legal notice. So his tweets, I guess are now official legal notice. He said he’s going to attack cultural sites, and then Kellyanne Conway looks that reporter dead in the eye and says, no, that’s not what he said. She, she literally read his words and you, Kellyanne are like, nope, nope. Didn’t happen. Nope, you’re wrong. This woman is gaslighting the United States trying to make us all think that we’re going crazy. And I swear after watching that clip multiple times, if I had hair, I would have already pulled it out again because it’s so infuriating.

This woman is telling this reporter that reality didn’t happen, that that direct quote from Donald Trump that she just read to Kellyanne wasn’t actually a thing. But this is how desperate this entire administration has become. You know, it’s like a year and a half ago when Trump was giving a speech to troops and he said, do not believe what you see with your eyes or what you hear with your ears. He told them then to deny reality and we should have, we should have really paid attention to that because that is what his whole administration is about today. We can see what’s happening. We see the president’s words on Twitter, we hear them when he tells reporters on air force one, this is what he said the next day. He said they’re allowed to kill our people. They’re allowed to torture and maim our people. They’re allowed to use roadside bombs and blow up our people and we’re not allowed to touch their cultural site? It doesn’t work that way.

No, it does, international law says that it work that way. The treaties we have signed says it does work that way. You can’t resort to the same tactics as the group that this country has spent the last 18 years vilifying, saying they’re horrible for doing these things and you want to stoop down to their level, Mr. Trump. And you’ve got Kellyanne Conway out there saying, no, no, he doesn’t. He never said those things that you’re literally reading to me from his Twitter feed. This is pure insanity, but it’s also exactly what we’ve come to expect from this administration on a daily basis.