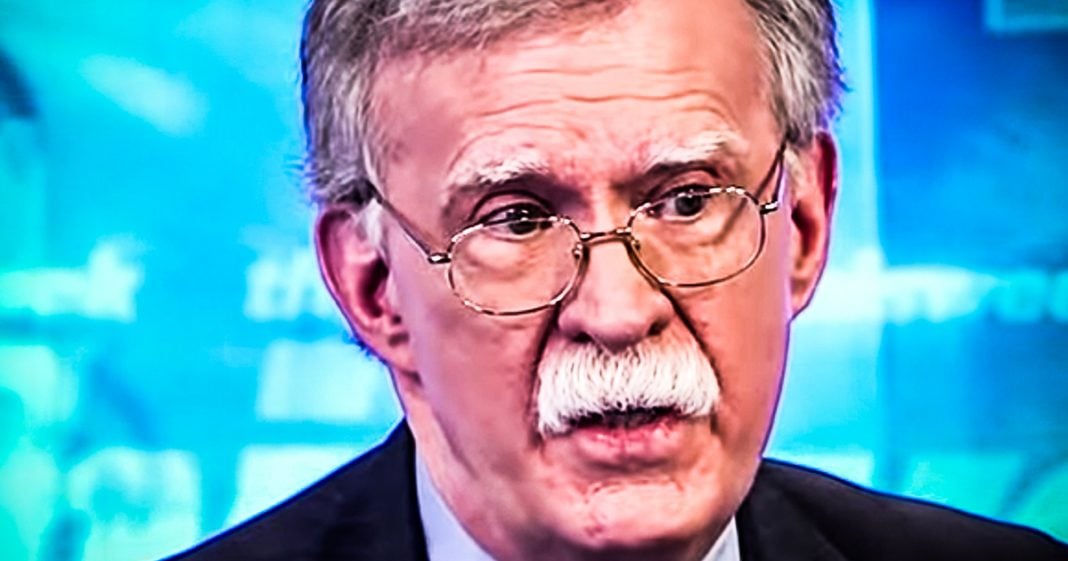 Former national security adviser John Bolton has announced that, if he is subpoenaed, he would gladly testify at Trump’s impeachment trial in the Senate. This could prove to be bad news for the Republicans, as Bolton was one of the few members of the administration who strongly opposed Trump’s actions with Ukraine. Ring of Fire’s Farron Cousins explains what’s happening.

Yesterday, John Bolton, Donald Trump’s former national security advisor announced that he absolutely would testify in a Senate impeachment trial should he be subpoenaed. Now, this was a big development, but unfortunately for Mr. Bolton, who says, heck yeah, subpoena me. I’ll come and testify, I don’t care. The Republicans who will be running the Senate trial have pretty much made it clear that they’re not going to be calling any witnesses to testify. Even some of those senators who may or may not have been on the fence a little bit, like Marco Rubio was asked point blank by a reporter yesterday in the halls of the Senate, would you call John Bolton to come testify? And Rubio said, no, I don’t think so. You know, I mean we’ve, we’ve already got the, the articles that are going to be coming our way. Let’s just go off that. We don’t need to call these guys to testify. Right?

Why would you want to call John Bolton to testify? He’s only one of the few people in the administration that told the president that what he was doing was wrong and was completely against it and tried to convince everyone else that this is not legal. For all of his faults and given the fact that he is a horrible human being, John Bolton actually was right about this one particular issue and he knows the truth. Nobody that testified in the house of representatives for the impeachment inquiry was as high ranking as John Bolton was. And since Republicans in the Senate are not going to call John Bolton to testify, you have to have a vote of 51 senators in the impeachment trial in order to call a witness to testify, which would mean Democrats would have to get what three Republicans to agree to this. I know Mitt Romney said he’s up for it.

Murkowski is a little wishy washy, there’s no way she’s going to fall with it. And Susan Collins absolutely is going to have a really hard time coming up with a good excuse as to why she’s going to vote to not call Bolton and other folks to testify. It ain’t going to happen, folks. What should happen is that the Democrats need to take their articles of impeachment and say, you know what? We’re not done with this. We’re going to kind of start over a little bit and the first person we’re going to call to see about potentially adding more articles of impeachment is John Bolton. We need to hear from him. We need to know what he knows, what he saw, what he said and what they said in response. That’s what needs to happen because it’s not going to happen in the Senate. The only place this can happen right now is the house of representatives, which is why for the millionth time, I’m going to say this, Democrats really screwed the pooch by rushing impeachment in the house.

There is so much information that has come out just in the last few weeks after they already voted on the articles. I mean we, we had a ruling from a judge last Friday where Lev Parnas was finally allowed to turn over his cell phone and other records to Democrats in the house of representatives. But oops, we’ve already voted on the article. So what good does that do? Now, John Bolton’s coming out, say, hey, I have some things I, I’d like to say and house Democrats are like, well, well shoot. I mean, we already, already voted on these things, man. Now we got to go back. We’ve got to change and we get to have new hearings, eww. No, Democrats screwed up. And I understand that it doesn’t matter what they get from Parnas. It doesn’t matter what Bolton would say if the Democrats in the house do call him to testify, it’s not going to change what’s going to happen in the Senate. But what it could change is the public’s opinion that’s already on the side of the Democrats right now. But if you want to get it even further and you want to hold it there until after the election, you have to pull those articles of impeachment back and essentially give yourselves a do over because you really screwed up on this one.